The World Endurance Championship (WEC) is doing away with grid girls, umbrella girls or grid queens as part of an effort to change with the times. No more scantily-clad women on the grid wearing bum-floss spandex costumes with copious cleavage and more. The WEC chief executive Gerard Neveu told Reuters:

“From Silverstone next week, you will see that for any race we will do — no grid girls like in the past,”

“For me that is the past. The condition of women is a little bit different now,” he said.

“I talk about this with my wife quite a lot, and we both agree it’s actually pretty backward,” the Briton, who has also raced in Formula One, told Reuters.

“It’s old school to have such a concept as grid girls. Surely the world’s moved on? And motor racing should follow quite closely what the rest of the world’s doing in that respect.

“I think that’s a really nice touch, a modern touch as well, from the WEC to take that aspect of racing away. It is a bit sexist.”

We spoke about the issue last year when the Austrian Grand Prix raised the bar and had grid girls dressed in culturally appropriate clothing as a nod to the Austrian dress known as a dirndl. We found the move refreshing as a homage to Austrian culture as well as more respectful of women, however, some websites made fun of the situation. Some very large websites which I won’t name.

While many may be in agreement with the WEC’s decision, I am also sensitive to models that make a living from jobs such as these and while Austria had it right, eliminating the opportunity completely could be financially impactful to the modeling agencies that rely on racing events for revenue. Staging grid positions and adding beauty to an event is a consideration but making it look like a strip bar is another issue altogether and some of these races are only missing a pole to get the full effect.

Regardless, the WEC has taken a step to eliminate the grid girl completely. Will F1 follow suit given they generally like the glamor and most of their yearly review videos are laced with bikini-wearing women in Monaco?

What about the networks? Does April Rose bring insight and in-depth reporting to the viewers or the NASCAR cup girls in their spandex body suits? I’m not impressed with many networks that find the most attractive, curvy women they can get and throw them in the pit lane or on camera. It really is pandering to a least common denominator. 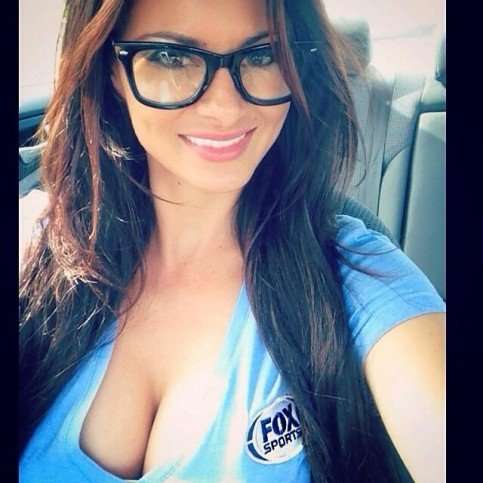 I think of women like Jennie Gow or Lee McKenzie who work tirelessly at their craft and in the US, I have always been impressed with Jamie Howe and her hard work in a very uncomfortable NOMEX suit in the pit lane reporting. Rebecca Lowe on NBC Sports covers football (soccer) and does a very professional job of it. There are women who do an incredible job unpacking sport but there are many who, in my opinion, are the network’s version of grid girls. Is it time to get rid of these as well?

Dude. Everything doesn’t have to be equal. Men are drawn to eye candy much more than women are, that’s what the girls are for. Women on the other hand prefer the storyline, just look at fifty shades of grey.

So Ryan Gosling is popular because of his…acting?

I hate to break it to you but women like a handsome man just as much as guys like a hot women, they are just better at playing it cool.

If Bernie surfaces the Women’s F1 Series (PLEASE GOD I HOPE NOT), they should have grid guys.

Pretty sure Lewis in his see thru race suit gets many a female fan’s KERS fully charged.

To be fair, it was a group of dapper young guys (at the last sporting event I attended) that where pushing a free beach towel in exchange for a years subscription to the WSJ.

NOOOO!!! At least not until after the Singapore GP. I mean. gorgeous Asian Singapore Girl flight attendants and Formula 1…what more could a guy ask??? ;)

I say dress the girls respectfully to the tradition of the country. The models get to keep their jobs and the girls are still fun to look at.

I shudder to think what traditional American women would be. I am thinking Jersey Shore or the big gals at Walmart on mobility scooters.

Attractive women in provocative clothing is “backwards thinking”? I guess no one told the music industry, the fashion industry or most women walking down the street.

For me, if scantly clad pretty women is wrong, then baby I don’t want to be right!

There is a massive comments thread over at F1Fanatic on this very subject, and quite honestly, some of the comments makes me doubt the human race. Or at least the male part of it… :-) I don’t see the point of grid girls at all – the cars (and drivers) are what tune in to see, and I wouldn’t miss them one bit if they weren’t there. And if F1 were to lose the applauding row of girls on the way to the cool-down room, I’d be even happier – that always makes me cringe, as it positively reeks of… Read more »

It’s clear grid girls are inappropriate, the only question is how far you want to take that thinking and what questions will it make us face about our sport and our lives if you do? Using women as decoration and implied prizes for men who do dangerous things is primitive, but then turning a hundred gallons of fuel into an earsplitting noise, a portion of speed and the realistic possiblity of seeing someone die is primitive as well. Sport is primitive. Formula One is great partly because it challenges the human race at its most developed while leaving a place… Read more »

I agree it is a rather heavy handed approach to a a issue that (I believe) is addressing itself. As women become a more prevalent consumer, the more the market will work to address their interests. I look at what has (slowly) become of the over-the-top James Bond intro-credit sequences. I; for one, always rather enjoyed the old symbolism of the shadowy woman as “great power”. A item of desire all men seek, something impossible to truly posses, and the ultimate source of ruin. Just as the plot or item of world power in the film would mirror. These days,… Read more »

Guys: You can ationalize this all you want – models need jobs; they could wear culturally appropriate dress; it’s just a bit of fun; ‘men’ watch racing; other industries do it too so it must be ok; it’s who we are; “that’s what girls are for” – bottom line, this is sexism/bigotry at its ugly core: women used as eye candy, playing to the prurient interests of certain men. I agree with Andreas, there is absolutely zero-point-zero need for this. Either the racing is good enough a show or it is not. To use women, or African Americans, or Irish,… Read more »

A highlight on Le Mans 1982 was the Hawaiian Tropic girls on the grid as we got ready to run, Call me crazy but I like girls

I LOVE this discussion! I have a take on it from a very different angle and odd vantage point. IMHO, i see/hear many people today putting theoretical/politically-correct spins on things when there is a very visceral and emotional baseline reaction to things that is trying to be covered up with non-emotional, intelligent speak. My wife is a fitness model, figure competitor and NASAM personal trainer and educator. She is super smart, has a advanced degree and sometimes can be intimidating when she needs to be. She is as nice as anyone you would every meet, yet is 180 degrees from… Read more »

Let it be known, I have met your wife and she is a delightful person and incredibly nice. :)

This website uses cookies to improve your experience while you navigate through the website. Out of these, the cookies that are categorized as necessary are stored on your browser as they are essential for the working of basic functionalities of the website. We also use third-party cookies that help us analyze and understand how you use this website. These cookies will be stored in your browser only with your consent. You also have the option to opt-out of these cookies. But opting out of some of these cookies may affect your browsing experience.
Necessary Always Enabled
Necessary cookies are absolutely essential for the website to function properly. This category only includes cookies that ensures basic functionalities and security features of the website. These cookies do not store any personal information.
Non-necessary
Any cookies that may not be particularly necessary for the website to function and is used specifically to collect user personal data via analytics, ads, other embedded contents are termed as non-necessary cookies. It is mandatory to procure user consent prior to running these cookies on your website.
SAVE & ACCEPT
wpDiscuz
19
0
Would love your thoughts, please comment.x
()
x
| Reply
Comment Author Info
Report this comment