Back in 2004 we Formula One fans learned a little more about racing circuit construction than many of us previously knew. we learned that the unique characteristics of the individual locales these circuit posses give pause to the type of materials used in creating them. Take the Bahrain International Circuit which was completed and opened in 2004 for example.

Being constructed in the middle of a desert, concerns that sand would blow onto the circuit and create a serious lack of grip were taken into consideration. The organizers were able to keep the sand off the track by spraying an adhesive on the sand around the track. In effect, gluing the sand together around the edges of the track. 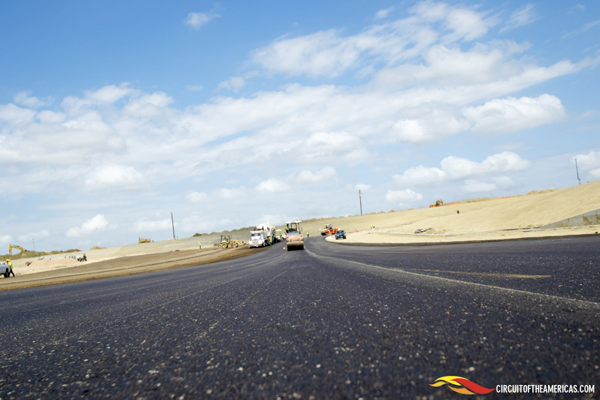 The surface of the track used Graywacke aggregate, shipped to Bahrain from Bayston Hill quarry in Shropshire, England. This aggregate is more course and provides a higher level of grip than standard aggregates used elsewhere.  The same aggregate material is used at the Yas Marina Circuit for the Abu Dhabi Grand Prix.

So it is with a keen eye that we focus on the asphalt testing going on in Austin Texas for the Circuit of the Americas as it will play host to the US grand prix in november. Tilke engineers and local contractors have been testing different aggregates and teaching construction workers the nuance of laying a race track surface.

“As the production limits are much tighter compared to national standard, we give special training to the construction companies, support and supervise design, production and paving,” said Dr. Rainer Hart.

Dr. Hart is the managing director of Hart Consult International. Dr. Hart was involved in the construction of several test tracks and most of the F1 racetracks built since 1996. Working together with Tilke Engineers & Architects since 1985, he developed a special quality assurance system for race and test tracks which is used all over the world.

The makeup of the asphalt was developed specifically for the Circuit of The Americas.

“We don’t have any general racetrack mix design,” Dr. Hart explained. “A mix design has to be created for each track individually regarding climates, local standards, availability of suitable aggregates and bitumen. The quality of the aggregates is better compared to usual roads regarding resistance against polishing. The asphalt has special requirements and modifiers.”

Asphalt is a mixture of bitumen, different sizes of aggregates and air. It is crucial that the coarse-textured surface of the track does not get polished smooth by the sliding tires of the F1 and other race cars, so a very high quality aggregate–made up of a mixture of sand, chippings and fillers–is used. Only preselected local quarries, which can provide superior products, are chosen as suppliers for track materials. This insures that the surface texture of the track remains “grippy” and provides optimum traction for the tires on the race cars. 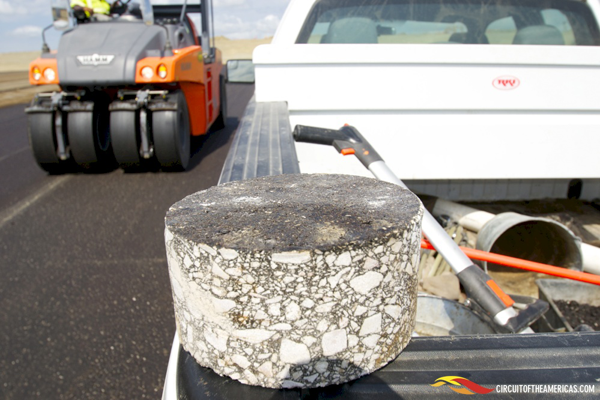 The final composition of the layers, from top to bottom, is as follows:

The evenness and consistency of the track levelness overall, meanwhile, is practically as smooth and flat as a table. There will be no bumps, dips, uneven joint seams or variations on the track surface.

The ultrasonic sensors insure that there no surface irregularity out of tolerance. It must meet the stringent required accuracy of +/- 0.315 of an inch (+/- 8mm). It is checked, lengthwise and crosswise to the paving direction on each lane, by using a 13-foot (4 meter) straight edge.

Special care is paid to the tunnels and drain pipes running under the track because if the earthworks in these areas are not solid this could affect the uniformity of the track surface above.

Once that work is done and the foundation for the track–grading the soil, sand and gravel base–has been completed, work will focus on making sure there is no settlement of the earth below the track.  When that’s confirmed, the asphalt surface will be laid down.

Race Report: Ocon wins Hungarian…
12 hours ago by zackh900
I think the penalty against Stroll was fair—everyone else on ...