Who has best Power Unit? Monza may tell the story

The FIA measures the speeds of the cars at each of the intermediate timing points around the circuit and over the finish line.  In addition they have a speed trap usually where they believe the maximum speeds will be reached.  At Monza the Speed trap is 212 metres before turn one, so just before the drivers have to brake for the first chicane, while the finish line is some 115 metres before the DRS activation point on the start straight.

Due to the fast nature of this circuit, teams bring low drag versions of their serodynamic package which are not seen anywhere else, the speeds here can therfore be used to compare the power unit performance possibly easier than at other circuits.  In particular I was interested in how rapidly the cars were accelerating from the finish line (relatively close to the exit of the Parabolica) to the speed trp just before they applied the brakes at turn one.  For whatever reason the speed trap figures published by the FIA at Monza exclude the Toro Rosso cars, so a comparison of the 2015 specification Ferrari Power Unit is not possible.

In qualifying all drivers are able to use DRS on every lap, and most try and complete the lap without interference from slower cars in front, so the speeds recorded are possibly more consistent than in the race (when not everyone gets DRS on every lap, and the effect of ‘the tow’ from a car in front can dramatically increase the speeds recorded).  The table below shows the speed recorded in qualifying at the finish line and the speed trap.  They have been sorted in order of who has gained the most speed. 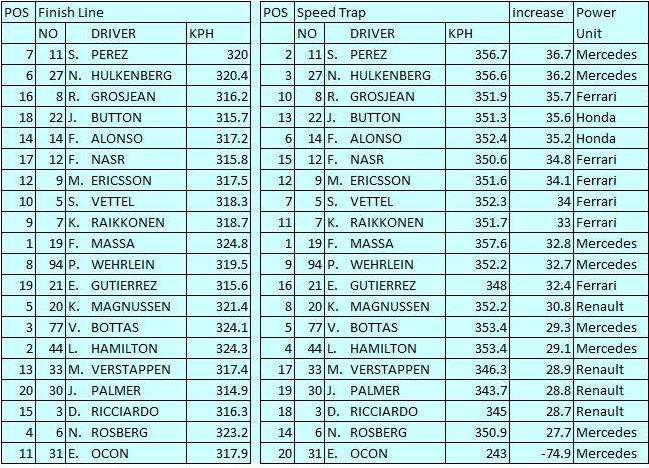 While Felipe Massa was fastest over the finish line at 324.8 km/h and fastest through the speed trap at 357.6 km/h he only gained 32.8 km/h down the straight.  In comparison the slipperier Force India’s gained over 36 km/h in the same distance.  The Mercedes powered cars are spread throughout the field, while Esteban Ocon’s retirement from qualifying resulted in him slowing down on his only run down the straight, second place qualifier gained the least speed of all the cars, just 27.7 km/h, fourth fastest across the finish line, he was only 14th fastest before turn one.  Both McLaren Honda’s are well up in the list, and interestingly the works Ferrari’s are behind most of their customer cars (despite the last 3 tokens being spent this weekend and taken by the works team and Haas).  Renault would look to be the weakest performing power unit in qualifying; with not only the speed gained being low, but the maximum speed was low as well.

In the race it is harder to judge if the speeds recorded come from the same lap, as it is just the maximum speed recorded at that point on any lap of the race.  It seems fair to assume that to be fastest at the speed trap before turn one the car must have been approaching its fastest over the finish line.  The order of the cars is surprisingly different 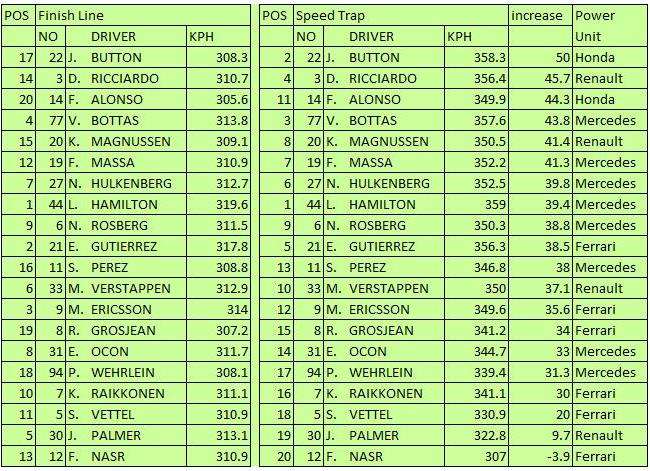 Starting at the back, Nasr and Palmer retired early on following their collision coming out of the first chicane, so their results in this table are not indicative of their performance.  The two works Ferrari’s gained the least speed of anyone through the race, but I think this can be explained due to their position in the race, too far behind the Mercedes to get DRS regularly, although it does look like Räikkönen may have got DRS once before dropping back to preserve his tyres.  Further up, although Hamilton was the fastest overall at both points this is probably due to a tow from following a car closely through Parabolica and then passing it under DRS.  Hamilton’s maximum speed gain down the straight was only slightly more than Rosberg’s (39.4 km/h compared to 38.8 km/h).  The surprising thing for me was how well the McLaren Honda’s come out of this, Button gaining 50 km/h (presumably when he passed his team-mate) going from 17th fastest at the finish line to 2nd fastest before turn one.  With Alonso in third, either the Honda has improved a lot, or the McLaren size zero chassis is really slippery.

The Renault (does anyone call them TAG anymore?) powered Red Bulls also show well with Ricciardo in second while the works car of Magnussen is fifth.  In the race the Williams’ out dragged the Force India’s reversing the fortunes of qualifying.

What do you think, is it possible to judge the relative performance of the power units in this way? Or is the absolute fastest speed in qualifying a better assessment (the top five speeds are Mercedes powered, followed by a Honda, a Ferrari and then a Renault).  It is easy to say that Mercedes have an advantage because they are so dominant; but that advantage isn’t all down to the power unit (otherwise Williams, Force India and Manor would be scoring many more points).  When Vettel and Red Bull won four championships on the trot, they never had the fastest car in a straight line (it was usually amongst the slowest), but they always complained about the underperforming Renault in the back.  They are still about the slowest through speed traps now, it is just the way the team chooses to set the car up for optimum laptime.   However the fact that Ricciardo can come second in the list of the  fastest accelerating cars down the start finish straight shows that there isn’t much wrong with the power unit.

In judging the best PU, you’d have to discount DRS and drafting (you call it “tow”). Part of the effects of the PU alone is in acceleration, part in top speed. Since neither of the two can tell the whole story by themselves, it’s difficult to judge which one is the best sometimes.

The analysis is interesting but I think that by looking at the late stage increase in speed, rather than the overall increase (or early stage) you are missing part of the picture. Why should you penalise Lewis’s engine, he only increased his speed by roughly 40 kmh-1 when he was in fact 10kmh-1 faster to start with. Part of this would have come from carrying more speed through the corner into the straight but also part of it could have come from more torque lower down, allowing him to accelerate faster. Given that the drivers are going around a circuit… Read more »

As Hamilton has the same power unit as the Williams, Force India and Manor teams, the difference in their speed over the finish line must be down to the car performance in carrying more speed around the final corner.

This is totally inconclusive, even useless. One would think that Honda is very competitive, which is absolutely wrong. A lot of the above figures depend on the aero package used and the drag it produces. Rambaldi (comment below) mentioned more important factors than this article.