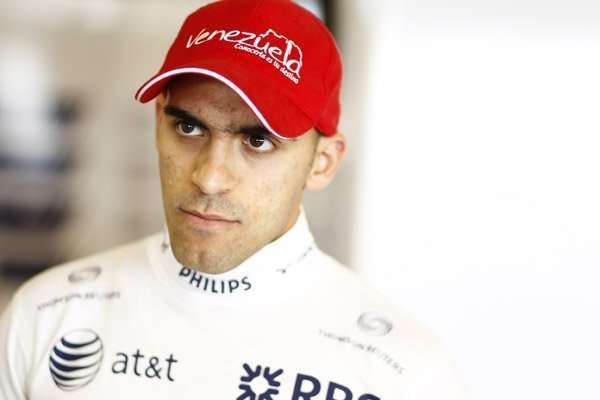 The big news is in! While Rubens Barrichello and Pastor Maldonado seemed distant on the concept of Pastor being the veteran Brazilian’s teammate for 2011, it seems one of F1’s worst kept secrets is officially announced…Maldonado will drive a Williams F1 car in 2011.

From the Williams F1 press’r:

Venezuelan-born Maldonado started his motorsport career in karts at the age of seven, his passion for the sport ignited by a father and uncles who all competed. Having won seven national karting titles, Pastor moved into Formula racing in 2003. With three series championships and 30 wins to his credit, most notably a superlative victory at Monaco in only his debut year in GP2 in 2007, Pastor brings a wealth of experience to the team at only 25 years of age.

“Pastor first caught my eye in 2007 when he drove a masterful race at Monaco. Since then, he has regularly reminded us of his unquestionable talent with some skilful wins, particularly during this year’s GP2 championship, taking an unsurpassed record of six successive victories. Of course, we already know Pastor from the time he spent with the team at the Abu Dhabi test, but we are very much looking forward to developing his talent over the winter and a fruitful season with him next year.”

“I feel very privileged that Williams has selected me as one of their race drivers. It is a great way to end what has already been an amazing year for me. I tested with the team in Abu Dhabi, but can’t wait to start working with everyone properly to be in the best possible shape going into next year. I will be doing my best over the winter to prepare myself, and I know the team will be working hard to ensure a successful season. 2011 will be the first time in nearly thirty years that a Venezuelan has driven a Formula One car so I will be looking to get some good results in return for the support my country has given me to help get me to this position today.”

It’s nice they have given him a shot and it’s good news for Williams F1 but I have to be honest, I keep thinking of Peter Windsor’s words in our interview here. It’s actually a sad day as Williams F1 is making this arrangement due to sponsor evacuation and they left a terrific young German driver at the curb (kerb) because they couldn’t afford him. Not a good thing if you are a Williams fan.

Here is a quick Q&A that Williams F1 provided with Pastor:

Q1: What started your career in motorsport?
PM: Having competed themselves, my father and my uncle are very passionate about motorsport, so I inherited it from them. In my city of Maracay, there is a go kart circuit about five minutes from my home. When I was about three or four years old I said I wanted to race but I was too young, then when I reached the age of seven my father gave me a kart and we started from there. From that moment until now we have never stopped.

After karting in Venezuela, I came to Europe in 1998 to compete in international kart races, which was great for me to get experience racing outside my country. After consistently being at the top, I decided to move to Italian Formula Renault. I won the championship in my second year. We made the jump to GP2 in 2007 but I only did half a season as I had an injury. We came back in 2008 and finished fifth in the championship, just six points adrift of the leader in a very close championship.

Q2: You were crowned GP2 champion this year. What does that feel like?
PM: It was an incredible season. We were competitive from the beginning and went on to win six races. The team worked well together to achieve victory and by the middle of the season I already had a good gap and took the title at Monza.

Q3: Do you think you are ready for F1?
PM: GP2 is a very good championship; it really prepares drivers well for F1. I have worked very hard to get to this position and yes, I definitely feel ready.

Q4: How does it feel knowing you will be driving for AT&T Williams next year?
PM: Williams do an amazing job. It is unbelievable to be here and to be part of the team. It is a dream.

Q5: What do you make of your new teammate Rubens Barrichello?
PM: For sure Rubens is a pleasure to have as a teammate as he is a very experienced driver. I can learn so much from him. It will be fun as he is South American too! I think it is going to be a very interesting team.

Q6: How will you prepare for your first F1 season over the winter?
PM: I will keep pushing in my training and working in the simulator. We don’t have a long time, just one or two months before the first test, and I am going to be fit and ready.

Q7: You had a day in the FW32 at the Abu Dhabi Young Driver test. How did that go?
PM: It was amazing. It was a big moment for me because only days before I had been driving a GP2 car and there are some big differences. I improved lap after lap and completed the programme so it was a very good experience for me.

Q8: What are the differences between a GP2 car and an F1 car?
PM: There are three big differences. The first is the difference in engine power; the F1 car has amazing power and a higher top speed. Secondly, the braking point; the brakes are a lot harder in F1. Finally there is much more downforce and general grip.

Q9: You will be only the fourth Venezuelan to have ever driven a Formula One car. What does that mean to you?
PM: It has been nearly 30 years since Venezuela has had a driver in Formula One so the country has been pushing young drivers in the hope of having someone represent them. I am happy to now be that driver.

Q10: To summarise, what will be your objectives for the 2011 season?
PM: I just want to do my best, to be as close to the top as I can and to get the maximum out of the car. The team are working very hard and I need to push to be at the top as soon as possible. I am a rookie but that isn’t going to be a problem. I need to keep focussed and to do my job.