Working from the best seat in the house

How do you get the closest seat to the racing action without actually sitting in a race car? Become a corner worker! We’ve all seen them at the track, those crazy folks in the white painter’s coveralls waving flags, running out on course to fetch debris, and getting to be closer to the racing action than any of us mere spectators. It’s a cool looking job, but how does one get into it? What are the benefits and downsides to being a corner worker? While at some of the events I worked as a photographer this past year, I chatted informally with several of them about their experiences. At the SCCA Majors at Heartland Park last month, I chatted on the record in the brief respite between sessions with Sharlene Smith, Dave Prokop, Ralph Johnson, and Jim Shoemaker. 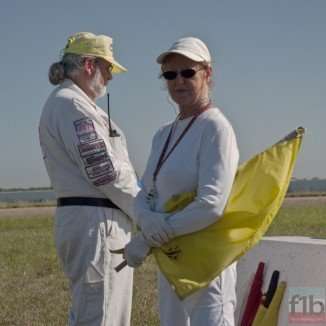 Doug Patterson: How did you get started with the SCCA and corner working?

Sharlene Smith: My husband and I used to go by a lot in Kansas City on our way to church and when we came back we’d see all these cars were out there going around pylons, so we stopped to see what was going on. It was called a gymkhana in those days. We got interested in it and my husband built a dune buggy, and we started Solo racing, gymkhana racing. Our first race was in a grass field across from where they built the Royals Stadium, and some people had on chains and some people had on different things and so we got hooked on that. We raced the dune buggy for many years. Then we went to a Formula Super Vee and Solo raced it for many years. When they built the track at Heartland Park, my husband decided he would like to go road racing. So when they opened the track in 1989, we came to the school and started corner working then because we knew that if racers were going to be on the track, they’d need corner workers. We did that for two years, and my husband started racing a D Sports Racer and I crewed for him and we did that for 20 years. When he retired, I started corner working again because it is hard, sometimes, to get corner workers.

Doug: So how do you become a corner worker?

Sharlene: You go to a Crash-Fire-Rescue School, and you learn how to extricate if there’s an accident.

Doug: So there’s more to it than waving flags.

Getting started is easy enough.  All one needs to do is to become an SCCA member and sign up as a volunteer worker. There are novice guides out there, and it’s certainly wise to be prepared, but much of the training is done on-the-job under the mentorship of an experienced corner captain. As one gains experience and proficiency, one can move up from being regionally licensed, to a divisional license, and eventually to a national license. 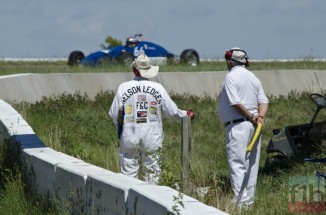 Corner workers are a vital part of a race weekend. Without them, there is no race! What is truly amazing is that such a vital role is filled by volunteers who are usually members of the Sports Car Club of America (SCCA).  As it turns out, these brave, insane people work not just their local club races, but many volunteer to work pro-level races including IndyCar, IMSA, and even the Formula 1 race at Circuit of the Americas.

Doug: So what’s the up-side? Why be a corner worker?

Sharlene: You won’t get any closer to the race cars!

Dave: This is all volunteer, too, and is at our own expense. I’m from St. Louis, we pay for our own hotel rooms, we pay dues to join the club [SCCA], and then we volunteer and travel around the country to do this.

Doug: So it’s all about the passion for motorsport?

Sharlene: But it’s all a great group of people and you make friends. 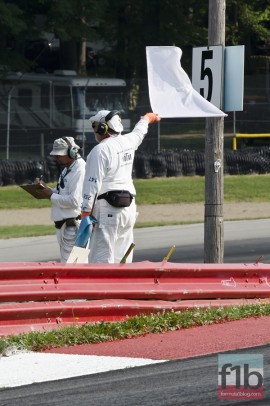 Doug: As corner workers, is club racing all that you work, or are there opportunities to work other races as well?

Dave: You can. When the Grand Am comes around to run, the first people they ask are the SCCA corner workers, the experienced ones. Formula 1 with the US Grand Prix, Trans Am, all of the pro racing series the SCCA has, The Rolex 24 Hours of Daytona…

Doug: Surely, after working a club race or two, they’re not going to let you go flag a Formula 1 race. What do you have to do to get that opporunity.

Ralph Johnson: Well, maybe not a Formula 1 race, but an IndyCar race. I’ve gone to the last two out at Long Beach, and we’ve had rookies because they don’t have enough flaggers any more. If the individual gets interested in it and pays attention to what the instructors at the corner is telling you, it doesn’t take long.

Corner workers, especially at club events, not only wave flags, but they’re often the first people on the scene of an incident and are the First Responders to lend aid to any injured drivers or spectators. In many pro-level events, there are several squads of professional safety response crew distributed around the circuit, but at a club-level event, the corner workers ARE the response crew.

Doug: In IndyCar, NASCAR, other pro racing, there’s a dedicated safety crew, but at the club level, that type of safety work is on you guys.

Ralph: We’re the eyes of the drivers, and during the race we’re probably one of the most important factors. Experience is the answer to it, it really is.

Jim Shoemaker: I think a more workers should at least take a driving school, so you know what the driver is thinking and going through.

Ralph: With that type of experience, you can sense something is going to happen.

Jim: Usually we know they’re going to wreck before they do.

In the end, if you want to get as close to the action as possible without actually having a steering wheel in your hand, look into being a corner worker. Who knows, perhaps you’ll get to be the one down in Austin throwing that blue flag to Chilton as the rest of the Formula 1 grid tries to make their way by or waving the yellow for Maldonado, …again. 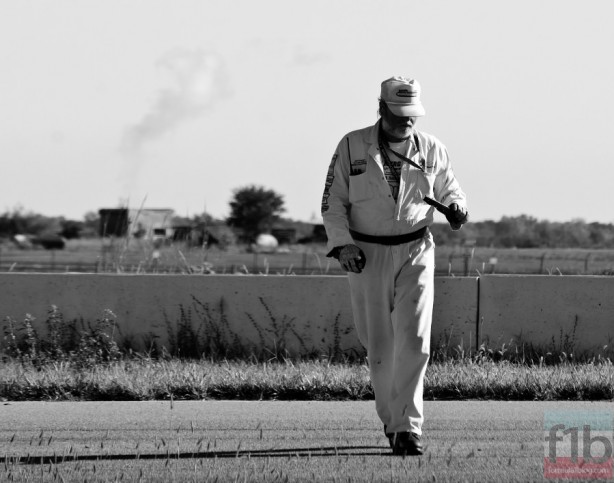