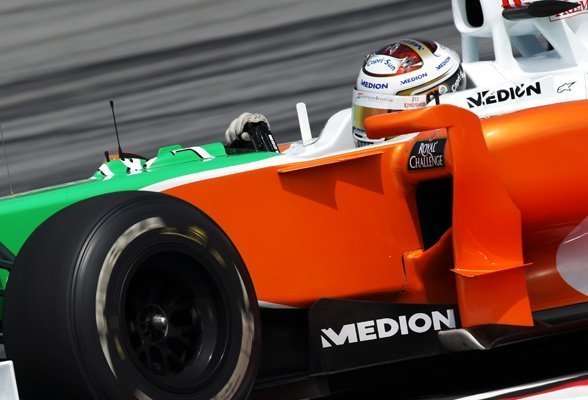 I just took a look at the Force India website, wondering if maybe there was some hint about which drivers would be piloting the team’s cars in 2011.

Nothing on that front. Still signs of Adrian Sutil, Vitantonio Liuzzi and Paul di Resta.

But that isn’t what caught my eye. What did makes me wonder if the team will make it to the grid in 2011.

It’s countdown to the grand prix in Bahrain has the race 436 days away. It’s true at the news page, too.

Count me crazy, but I’ll trust the official Formula 1 site, which has the season starting in just 68.

So why might this be? There seem to be a few obvious answers:

1. Force India is giving up. It knows that the various Lotus teams will be faster than it as well as maybe Virgin and even Toro Rosso.

2. The team is in fact planning on hiring di Resta and Nico Hulkenberg to drive, but can’t handle breaking the news to Sutil and Liuzzi, and so will just tell them to “check the clock on the site and we’ll be out there ready to go” in 400+ days. (The team might even be dumping di Resta under this scenario.)

3. It’s a little web glitch. But how likely does that seem?

4. My personal guess: It’s a trick being played on the other teams, to lull them into the sense that Force India is so totally messed up and disorganized that it won’t make the 2011 season. And then the team will show up with an innovating “bulging monocock” design that slipstreams through the air better than an Adrian Newey design and is perfectly suited to hold its new driver line-up: Jacques Villeneuve and Juan Pablo Montoya.

Previous articleBrawn: Not going to quit until Merc ‘is successful’, plus other ‘news’
Next articleCan 2011 be Barrichello’s year?