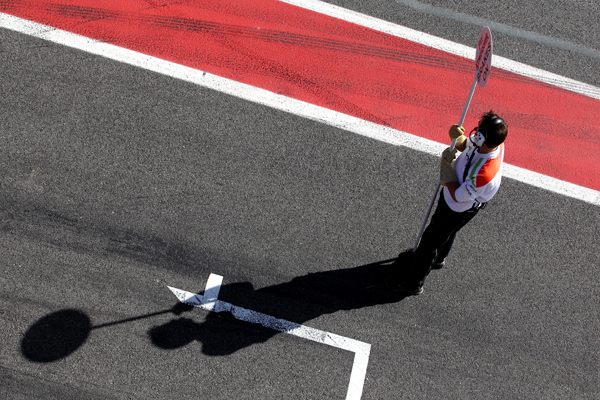 Well, we’ve seen the first race and while one race and one circuit hardly make a season, it may have given you some information to start fashioning an opinon on the new regulations. True that the rear wing, KERS and tires may play different roles at different circuits as Albert Park is just that, a park in which the cars race. A purpose-built circuit may have distinctly different details and possible outcomes for these regulatory elements. Nonetheless, it isn’t going to stop us from asking you what you think.

So what’s your view of the firs race? Was the first deployment of the DRS and Pirelli tires successful? Did the KERS seem effective or was it rendered ineffectual? What grabbed your attention during the race? Was it that lack of use of KERS by REd Bull? THe drive by Perez and Petrov?

Lastly, the tires…was this exciting or additive to the racing experience for a fan? Were you intrigued by the tactics and multiple pit stops used by the teams? Did the high degradation add an element of excitement or was it just confusing? You tell us because we have our own opinion, but as always, would like to hear yours.

Your View: Lewis Hamitlon in…

Your View: Who was wrong?…

Who’s in charge? Vettel or…

YOUR VIEW: Did tires, KERS…

Your View: Was Valencia result…

Renault sign ‘formidable’ Alonso for…
Jul 9, 2020 by Negative Camber
“Welcome to another addition of Thunderdome! Two men enter, one ...

Renault sign ‘formidable’ Alonso for…
Jul 8, 2020 by Negative Camber
I bet some of those Renault junior drivers were hoping ...

Race Report: Bottas wins Austrian…
Jul 8, 2020 by Xean Drury
That comment is kind of contradictory, if I could point ...

ABOUT US
This website is unofficial and is not associated in any way with the Formula 1 companies. F1, FORMULA ONE, FORMULA 1, FIA FORMULA ONE WORLD CHAMPIONSHIP, GRAND PRIX and related marks are trade marks of Formula One Licensing B.V. Additional information can be found at F1's website at www.formula1.com. We collect information about visitors who comment on Sites that use our Akismet anti-spam service. The information we collect depends on how the User sets up Akismet for the Site, but typically includes the commenter's IP address, user agent, referrer, and Site URL (along with other information directly provided by the commenter such as their name, username, email address, and the comment itself).
FOLLOW US
© 2020 TPF Privacy Policy
This website uses cookies to improve your experience. We'll assume you're ok with this, but you can opt-out if you wish.Accept Reject Read More
Privacy & Cookies Policy
Necessary Always Enabled
wpDiscuz
0
0
Would love your thoughts, please comment.x
()
x
| Reply
Comment Author Info
Report this comment