Your View: Does Michael want it enough? 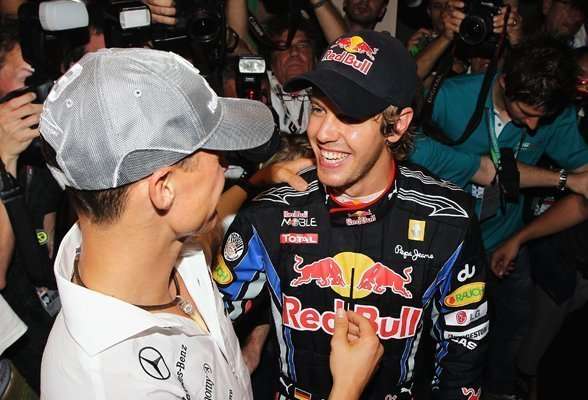 We’ve probably all got our own theories about why Michael Schumacher’s first season back in a Formula 1 car missed expectations. Those theories include:

Here’s another one I want everyone to ponder: He just doesn’t want it enough.

This one isn’t new. We’d heard throughout the season how Michael was finding a better balance to life. It isn’t all about being behind the wheel, in the garage, in a simulator or driving his engineers mad.

But it pops back up in his post-tire testing comments, at his official site:

“It was kind of my first day of testing 2011,and I feel we had an interesting session today. We gathered a lot of data and insights, and we got a lof of positive feedback from the new tyres which obviously cannot be more than a first impression. I am probably the only driver having ever driven Pirelli tyres, but then this is 20 years ago, so I did not have certain expectations. But in terms of consistency for example, it looked quite good. Saying that, we were driving the 2010 car today, so it will all be about how that tyres suits the 2011 car. I am already curious to try it out, but at the same time I am looking forward to having a break now. I am sure the guys are too, and they clearly deserve it. I would like to thank all of them for the good job they were doing over the season, I massively enjoyed working with them.”

I’ll direct you to this part: “I am already curious to try it out, but at the same time I am looking forward to having a break now.”

Would the Michael Schumacher at Ferrari have said he was looking forward to some time off? Is the drive just not quite there, especially when — I just don’t see how this is an arguable point — he has to work harder, not less hard, to maintain his edge?

I’m not saying he won’t win a race or more next year. And I’m not saying that his attitude today is worse than it was six or eight years ago. I just wonder if a little something inside is missing, and while it might be he’s a happier guy, maybe it was part of what made him so great.

Your View: Does Michael Schumacher want to win enough?

Previous articlePodcast #186
Next articleNews in German: Sutil near Force India deal + Red Bull refuses to have No. 1 driver