Zoom is out: Win a signed page and copy

This week marked the release of Zoom: Personal Images and Insights from the Stars of F1, the third official book of the charity auction of photographs taken by the stars the sport.

The book contains images which were taken by all the F1 drivers and team bosses over the course of last season and were auctioned in January in aid of Great Ormond Street Hospital Children’s Charity (GOSHCC).

These photos give a unique behind-the-scenes insight into the lives of the world’s most famous racing drivers. From Lewis Hamilton’s holiday snaps to the view from Kimi Räikkönen’s cockpit, they allow readers see the world through an F1 driver’s eyes.

The 124-page book retails at £15 and includes all 52 photographs from Zoom 2015 alongside descriptions of each image in the photographer’s own words.

Order your copy of Zoom here.

“It has all been done for a wonderful cause,” he says. “You are getting a glimpse into a side of F1 that isn’t shown on television and as you will see, it isn’t all about fast cars and champagne.”

This year’s Zoom auction took place at the InterContinental London Park Lane on Friday 16th January. The photographs were auctioned for GOSHCC in front of a star-studded guest list, including famous faces from the world of F1 such as Bernie Ecclestone, Christian Horner and Geri Halliwell, Claire Williams, Éric Boullier, Graeme Lowdon, Adrian Newey, and event host Suzi Perry.

“I’d like to thank everyone who has helped make Zoom possible, especially our partners, the teams and drivers, Bernie Ecclestone and everyone else who took a photo. Fans who missed out on a chance to bid for a signed print can still support Zoom by buying this book and it’s an ideal gift for anyone interested in F1.”

To commemorate the release of this great book, we’re giving away a free copy plus, a signed page from the book by Graeme Lowden of Manor GP. 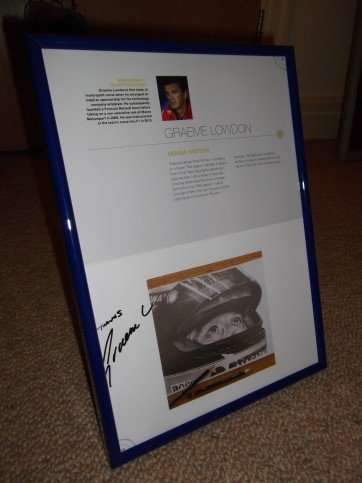 All you have to do to have a chance to win this terrific package is go to our Facebook page and give us a “like”. A winner will be chosen on April 10th, 2015 and a copy of the Zoom book as well as a signed page by Graeme will be awarded.

Received my book and framed print today in the mail. Thanks F1B.