The Spanish Grand Prix at Barcelona is a track the drivers and teams know well but warmer weather was a talking point heading into the weekend. As it turns out, Mercedes wasn’t bothered but the tire issues they experienced in the UK and they took Lewis Hamilton’s pole position to victory.

Hamilton’s teammate, Valtteri Bottas, left too much on the table with a slow start and that left the window open for Red Bull’s Max Verstappen to claim second ahead of him. Racing Point picked up the pieces but a Blue-flag penalty for Sergio Perez neutered an otherwise brilliant 1-stopper performance.

A big win for Lewis Hamilton who claimed pole and never looked back. He had plenty of pace in hand, managed his tires perfectly and took his 88th victory in Formula 1. Managed pace and tires were key to making his weekend a good one. Lewis made the right call by telling the team he didn’t want the Red compounds on his final stint and that, as Bottas showed, was the right decision. Lewis lapped up to third place slapping the rest of the grid like a drunk man at a bar making inappropriate comments.

A win for Red Bull and Max Verstappen who took second and it was touchy affair with Max and team arguing over the radio about the best way forward. Max was frustrated with the team and their coaching and told the team to keep it simple, stop focusing on Lewis’s race and focus on their own. The team were most likely doing just that.

A win for Racing Point who managed to get both cars into 4th and 5th. Maximizing their pace and performance for critical points. Despite the protests and appeals, the team are making the best use of their Mercedes relationship. Switching Lance Stroll to a 2-stopper (given he wasn’t pushing because he thought he was on a 1-stopper) was a very good result for the team-owners son and a terrific drive by him.

A win for Carlos Sainz who made a brilliant 2-stopper work for P6 and although Racing Point beat them, they managed to make the best of it for Carlos with Lando Norris squeaking into the points in P10.

A win for Sebastian Vettel who had the tough job of limping home on old Red tires to P7 and taking the F1 driver of the day vote with his efforts. Having to change his race strategy and go nearly 40 laps on Red compounds was a real challenge.

A fail for Valtteri Bottas who had a slow start and couldn’t get back around Max Verstappen, who was on an older engine. He did set fast lap, thanks to a late stop but leaving doors open at the start for the Racing Point cars and the lack of race pace on his second stop added to his downbeat posture on the podium. Valtteri is a terrific driver but I tend to think Nico Rosberg is right, he needs to be less agreeable.

A fail for Ferrari who left Sebastian out to dry by not managing his strategy. Asking him to push early on and then asking him to make it to the end was a mess. Vettel made it clear he wasn’t happy with the team’s lack of focus and communication, he would have managed his tires better when he asked earlier about going to the end on the Soft compounds. Brundle was right, his radio message was a sort of, “hey, I’m still out here, do you remember me?”

A fail for Alex Albon and Red Bull. First, Alex’s poor qualifying left him out of the mix and exposed his teammate to a Mercedes sandwich from a strategy standpoint but fitting Alex on the Hard compound tires on lap 18 was a bad call given the tire was 1.7s slower than the Medium compounds. He narrowly managed to finish ahead of Alpha Tauri’s Pierre Gasly but the sound of the clock ticking for Albon could find Gasly swapping seats sooner than later.

A fail for Renault who had the CEO of the company at the race and couldn’t find a point and that’s a reversal of pace from Silverstone. Not a good showing for Cyril Abiteboul when his boss was at the race. Never good to get beaten by your customer team, McLaren.

Not sure what happened to Charles Leclerc other than an electrical issue that stalled the car mid-corner causing a spin. Loosening his seat belts didn’t help matters because he got the car re-fired but had to box to tighten straps but apparently that took too much time and they retired the car. Probably best given the electrical issues.

Not sure what happened to the pace of Haas F1 but it evaporated compared to what they showed in Free Practice and Qualifying. Romain Grosjean floundered to last place.

I appreciate Mercedes boss, Toto Wolff, saying that Lewis had terrific instinct to not choose the Red compound but that is a sort of back-faded compliment suggesting that Valtteri should have refused the Red tires as well but he didn’t. He took what the team gave him and it was the wrong tire. 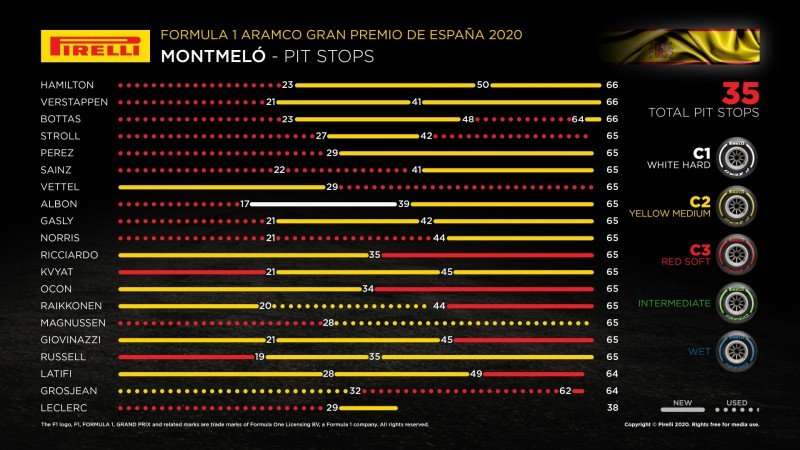 Good grief, Ferrari isn’t even a particularly strong midfield team at this point.

Yeah people are really searching for a bright spot. Driver of the day for Seb Vettel because he didn’t ruin his race on the first lap for once and was therefore able to score a couple points. That’s really generous. I understand people are biased, but if they weren’t haters they might recognize that Lancey putting a customer car into fourth is every bit as impressive as a four time champion putting a factory car in seventh.

I’d think most people figured Vettel deserved driver of the day for doing 37 competitive laps on the softs while having to come u with his own strategy while also having to instruct his pit wall to/how to actually do the calculations for lap times he needed to hit to keep in the points.

yes those are good points, his team seemed oddly inattentive for a 2 car group with 1 car running, and he wore a lot of hats. Still and all the car’s been on the podium a couple times this year so putting it in 7th is a modest accomplishment. I mean take Albon out and look who’s behind him. But to your point he got on with it under bad circumstances.

Lance had a terrific race and to be honest, Perez may have had a better race making a 1-stopper work apart from the silly penalty.

I do agree that Seb on Softs was driving outside of the cars capability and making it 38 laps on those tires was some serious tire management having already pushed hard on them before the team asked to go to the end. Something you’d see from Hamilton or Max too.

Tire management is boring and I’m becoming convinced that Haas is not going to be around next season, either that or they find a new power supply.

Yeah, my concern is Gene paying for another season of this on the hopes that 2022 will be better based on new regs. A big, expensive gamble.

agreed I actually really like Nico as a presenter he seems a little more well rounded as a person than a lot of the drivers. I liked it when someone was like ‘the engineers told me the drink bottle won’t work’ and Nico was all ‘don’t take that sh*t from the engineers. they’re the smartest technicians in the world they can do it. you tell them it WILL work.’ this is what a champion knows – so it’s worth hearing.

Nico has the most recent experience so his insight was a good addition to the broadcast.

If they would have focused on any midfield team as much as they follow the Mercedes leading everyone around, it would have been a much more exciting race to watch. That midfield is insanely close, and I don’t feel that they’re doing a good job whatsoever conveying that to the audience with the same amount of enthusiasm that they report on Hamilton complaining about anything. Yes, Hamilton will win. He’ll win pretty much every race, we get it. Yes he’s your British golden boy. No, it’s not exciting to see him not challenged for 50+ laps.

Previous articleHamilton takes pole over Bottas for Spanish GP
Next articleBottas vs the black overalls
Race Report: Hamilton dominates Spanish GPIt was a Mercedes domination but there was good racing midfield. Despite the overwhelming pave of Mercedes, Max managed to make it fun and the dram midfield added to the enjoyment.