As the old adage goes, “Things were better in my day!” rings true for some things, but not always every thing. Depending on who you ask, the 1960s era of Formula One was THE golden age. For others, it may be the ‘70s or even the ‘80s. Quite often, fans seem to cite the decade in which they first discovered Grand Prix racing as the one which rises above all others.

The 1990s may not stand out as the greatest decade that the sport has ever seen, but it did spawn one item which I think most of us can be at least a little thankful for: a simple, easy to follow championship points system.

Though the total points awarded for a finishing position have changed a couple of times since 1991, every driver and constructor’s (i.e. team) finish over the course of a season has counted. Before 1991? Oh, where do I start? I suppose the beginning is as good of a place as any.

When the Formula One World Championship began in 1950, only a driver’s top 4 finishes from the 7 race season counted towards his year end total. For the remainder of that first decade, a single point was also award to the driver who set each race’s fastest lap. Between 1954 and 1957, the points haul was upped to the best 5 finishes counting. But in 1958, things got a little weird.

If those seasons weren’t silly enough, then F1’s means for tallying a driver’s points haul became downright ridiculous in 1967. From 11 races, the points from the best 9 counted. BUT, even that was split between 5 counting from the first 6 races and 4 from the last 5. Until 1980, some semblance of this same seasonal split would determine the outright driver’s and constructer’s championships. Given the year, as few as 8 finishes counted (1979) or as many as 15 (1977). Believe it or not, every single number between 8 and 15, at some point or another between 1967 and 1980, would comprise the make-up of the championship. And each of those years would be split in half, with a specific number being apportioned to each end of the season.

In 1981, some sense of reason was found, as all rounds counted towards both series title hunts. For the six seasons between ’85 and ’90, however, the driver’s title alone reverted to the top 11 finishes across the entire season. FINALLY in 1991, cooler heads prevailed and, though the actual points per position have changed on two occasions since, every points paying finish has counted towards both the driver’s and constructor’s championships.

Now what does all of this jockeying about mean in the long run? For almost every single season over the last six decades, it really hasn’t meant anything. On a few occasions, had every point counted across the entire season of every season, the driver’s positioned in 2nd and 3rd places might have swapped here and there, but only twice has the World Driver’s Championship been decided by this very strange way of seeing things.

In the final round of the 1964 season, Lorenzo Bandini moved over to let his Ferrari teammate, John Surtees, take 2nd spot in the race. This then legal act of sportsmanship gave Surtees the championship by a single point over fellow Brit Graham Hill. All of Surtees’ finishes over the course of the season had counted, however, where as Hill had to drop a 5th place finish from Belgium. Had every point gone towards the title, these extra two would have made Graham Hill a three time World Champion and Surtees would not be counted in that elite group at all. 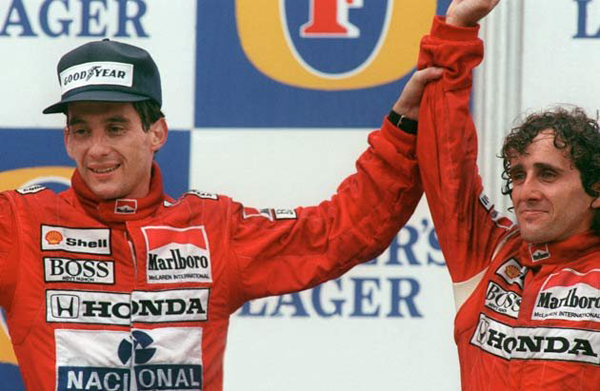 Most famously, the points system came into play during the 1988 season, with McLaren taking all but one race win from 16 rounds. At the end of the year, Ayrton Senna won the title with 90 points over Alain Prost’s 87, the Brazilian having taken just one more victory than his French teammate. However, with Prost’s seven 2nd place finishes to Senna’s three, Alain actually scored a total of 105 points to Ayrton’s 94. But with only 11 of 16 rounds counting, history stands with Senna on three titles instead of Prost with five (sorry, Todd).

Conversely, since all rounds of the season began counting, only once since 1991 would the final standings have been changed using the points system as it stood in 1990. And, of course, that would have been in 2008. Had only a driver’s top 11 finishes counted towards his season ending total, Lewis Hamilton, the eventual winner of the ’08 title, would have finished with 71 points, based again on the 1990 system. Felipe Massa, famously winning the championship in 2008, as well, if only for a handful of seconds, would have finished the season with 76 points…and the championship! Life, like F1 points systems, can be so cruel sometimes.