Aero Kits, worth the wait?

This week, Honda HPD released the second of the aero kits, due for competition in the 2015 Verizon Indycar series, though has it all been worth the wait?

The initial plan for Aero kits was first mooted by Indycar in 2010, upon the announcement that a Dallara chassis had been chosen by the ICONIC committee, over concepts submitted by Swift, Lola and the Deltawing group, for competition from the 2012 Indycar Series season onwards.

The ICONIC committee believed, or at least imagined in a conceptual manner, that companies including Boeing, Lockheed Martin and GE alongside Honda, Chevrolet and then engine manufacturer Lotus would manufacturer these kits which Indycar would then homologate into competition based on the core IR12 (DW12) chassis. Therefore, at least in theory, the series would see what fans had hoped for albeit a transitional one, a shift away from the spec car that has dominated open-wheel racing in the USA for several years.

Was that a realistic concept of Indycar to look at these companies, to produce what Indycar desired in 2012?

As it turns out, unfortunately not. The cost of the base chassis was higher than anticipated and therefore whilst Indycar got the new chassis, the concept of aero kits was postponed given its additional costs on an already expensive concept. The “Aero kit” concept was then delayed additionally several times before eventually disappearing from the public eye following the ousting of Randy Bernard as series CEO in October 2012.

Following a change of management, Mark Miles and Derrick Walker focused on other aspects of Indycar and IMS before Aero Kits appeared back on the agenda in June 2013 when the timeline for Indycars future was presented to the public. The first of these steps starting in 2013 with a redesigned floor and enhanced under-body, in preparation for the series introduction of Aero Kits, under a renewed concept for 2015.

Now three weeks from the start of the season, we have had that launch on schedule, with Chevrolet (Pratt & Miller) and Honda (Wirth Research) having shown visual concepts of the 2015 aero kits produced, and thankfully both has radically different designs.

Chevrolet appears to have gone for a more conservative approach, with many of the upgrades to the base chassis, based on winglets and flicks whilst preserving most of the look that the original Dallara IR-12 although having new, though classic Indycar styling cues in the scoop front wing design, in addition to new sidepods, and a radical departure to the standard Dallara chassis in the rear wing and wheel guards. 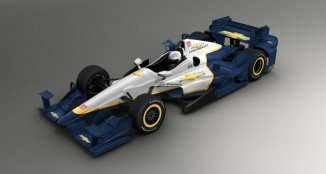 Honda, meanwhile, appears to have gone for a far more radical approach with less of the original DW12 visible. The front wing looking far less conventional in respects how you imagine from Indycar, perhaps debatably even closer to F1 cues in its design, and a far more sculpted design throughout with high emphasis of design by CFD which given Wirth Research’s background is no real surprise.

Happily both concepts are different enough to deliver on the original idea of creating distinctive aero packages. Although until we have them both on track together, which will be at the upcoming Barber test, we have no idea how the two compare. Despite private testing on both road and speedway configurations for both manufacturers.

Additional questions certainly exist. The first of these is how Indycar’s racing dynamic will change? The cars being more fragile and with much higher downforce, we should see very different race scenarios to the style we have seen in recent years and that brings a question of it’s own. Indycar’s race package has been fantastic the past couple of years, in terms of close, strong competition, does a concern exist that changing that package may solve the issue of spec cars but create new issues in the races becoming less interesting to follow?

The other issue for Indycar is the teams in question, which run each kit. Chevrolet has Chip Ganassi Racing and Team Penske in the same stable, whilst Honda’s only major player in theory is Andretti Autosport, does this mean we could see a disparity between the two manufacturer kits in terms of which teams are likely to factor in results early in the season? Not from a development standpoint, because that is limited by the series, more from the perspective of teams getting to understand the aero kits faster?

Personally, I’m excited and nervous, I think it has been worth the wait and I hope that aero kits bring a new element to the series as intended, although these aren’t the entire answer for Indycar, and the concept is much delayed with a new chassis due in the near future, perhaps limiting the impact, but it is in my opinion a welcome transition for Indycar to move towards opening the competition somewhat.

So do you the think the aero kit concept was worth the wait, or is it simply too early to tell?
A full 2015 Indycar Season Preview special episode of the Opposite Lock podcast will be coming next week, featuring Indycar, IndyLights and the remainder of the MRTI, with guest and FBC contributor, Doug Patterson.