Over the last two days the F1 teams have remained at Barcelona and held the first of this year’s in-season tests.   The exception was the Manor team who stated that they had no new parts to test, as they are saving any funds they have to go towards a genuine 2015 chassis that may appear after the summer break.

The remaining nine teams each ran a different driver on each day, although for a couple of test drivers they got to drive on both days (for two different teams).  Pascal Wehrlein had been due to drive the Force India on Tuesday followed by the Mercedes on Wednesday, however illness prevented is appearance for Force India, although he managed to drive for Mercedes today despite not being fully recovered.  Raffaelle Marciello drove for Ferrari on Tuesday, before continuing for their customer Sauber on Wednesday.  Meanwhile Pierre Gasly started on Tuesday with Toro Rosso beforre graduatlng to Red Bull on the second day.

Only seven current race drivers appeared at the test, Nico Rosberg, Marcus Ericsson, Daniil Kvyat, Jenson Button, Pastor Maldonado, Felipe Massa and Carlos Sainz.  The rest of the driving being done by the teams test / development drivers.   Some of these (mentioned above) were on loan from the team’s Power Unit suppliers, while others may have been there to help raise funds for the team.

The complete list of drivers and the times they recorded is shown in this table: 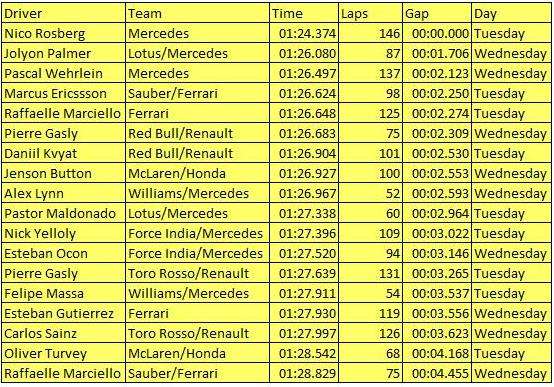 The team completing the furthest distance was unsurprisingly Mercedes, with both Rosberg and Wehrlein completing more laps than any other at well over a double race distance on each day.  Rosberg was only 20 laps short of the distance he covered over the three days of the race weekend in just the one day of testing.  Mercedes were one of four teams nominated to help Pirelli test new tyres along with Ferrari, Red Bull and Toro Rosso.  Rosberg’s best time of the test came from one of the unmarked development tyres, although this was some 1.6 seconds slower than the time he set during pre-season testing at the same venue.  With the times therefore meaningless, as once again teams were using different tyre compounds and different fuel levels to best suit their individual programmes, it is hard to judge who has progressed most over the past two days.

Second fastest overall was Lotus test driver Jolyon Palmer, doing nearly half as many laps again as regular driver Pastor Maldonado did the previous day as well as being over a second faster.

Regular Sauber driver Marcus Ericsson was substantially faster than tester Raffaelle Marciello, but perhaps he was struggling to adapt after driving the Ferrari on the Tuesday when he lapped within a couple of hundredths of Ericsson, and was substantially faster than the more experienced Esteban Gutierrez managed in the Ferrari on Wednesday.  Once again, these times are hard to interpret without knowing the programmes that the teams and drivers were working towards.

The Red Bull pair managed to lap in very similar lap-times, although regular driver Daniil Kvyat drove a third further than tester Pierre Gasly who had already spent the previous day lapping in the junior Toro Rosso team, where he also managed to out-pace Carlos Sainz.

At least things looked positive for McLaren, with Button recoding a faster time on Wednesday than he did in qualifying for the race at the weekend, although like Mercedes still some 1.7 seconds slower than the team managed in pre-season testing.  He also seemed far happier with the car’s handling which had improved over the scary laps he did in the race on Sunday.  One hundred laps for Button was also a reasonable distance, combined with over a race distance for test driver Oliver Turvey on Tuesday.

Williams completed the shortest distance on both days of the test.  No problems were reported for the team, with Felipe Massa lapping a second slower than the GP2 driver Alex Lynn.  The two Force India testers managed best times very close to one another and a respectable number of laps.

Whether the items tested will appear at Monaco, or later in the year we will have to wait and see.  The next race could see the first of the in-season power unit development tokens being used (with four power units per year, each would need to last five races, so the optimum time for the first upgrade would be the sixth race.  With the Power Units used in this in-season test not counting towards the four allowed per season, some of the teams could have been testing the effectiveness of these developments as well as aerodynamic changes.  However with Monaco not being particularly tough on power units it may not suit all teams to put a fresh unit in for this race, so it may not be until Canada that we see the first tokens being used.

The second and final in-season test for 2015 will be at the Red Bull Ring following the Austrian Grand Prix towards the end of next month.

Rumor has it; Ferrari will introduce a new power unit at the Canada GP. This unit is provide an addition 20-40 units of horsepower. With Austria, Monza, Spa, Silverstone, and Canada, this could present an opportunity to exceed or meet 2 wins this season. Hopefully, the Barcelona test session can shed light into the unlocking the potential with recent updates. Also has Jock Clear joined Ferrari? Or does he arrive this summer?

Hi Joseph,
Where is that rumour from, and is it likely that Mercedes, Renault and Honda will be making similar steps with their power units at the same time?

Thanks for the report and analysis Dave. It is obviously very difficult to draw any firm conclusions from testing, there are so many unknowns, so its great that you put in the work to give us what insight you can. I’m pleased to see that McLaren Honda had some reliable runs, though the pace still looks well off where they need to be to challenge for podium spots. Williams must be worried that they are not consolidating their second quickest Mercedes p.u. team. As ever, we now wait for the rest of the season, and hope that the gaps to… Read more »