Editor’s Note: Brembo has always been a good group to work with here at TPF and they are diligent about getting us information that unpacks the sport in a technical and meaningful way. I don’t normally run all the press releases we get but I think this one is particularly well done and I learned a few things from it. I thought you might enjoy it too. We’re not compensated to run these stories so no worries about me foisting pre-paid content on you, I just found it interesting. Here is the difference 10 years can make in F1 braking technology.

IN 10 YEARS OF FORMULA 1 RACING, STOPPING DISTANCE HAS GONE DOWN BY 22% AND DECELERATION HAS INCREASED BY 12 %

Exceptional progress has characterized the last 10 years of Formula 1 racing, confirming its role as the most technologically advanced test bench on the planet. This is true not only for the engineers and the leading Manufacturers, but also for producers of components like Brembo.

From 2008 to 2018, the braking systems were at the core of developments and increases in performance of remarkable dimensions. Improvements have also influenced the way drivers brake, which is decidedly different with respect to 10 years ago.

Today’s single-seaters are clearly very different from those of 2008 and the changed braking behavior cannot and should not be attributed solely to the brakes. The race cars have different weight distributions and aerodynamic loads, but even more importantly their tires are wider (and the tire manufacturer is different). All of these factors play a significant role in differentiating braking performance.

Similarly, the evolution of the Brembo braking systems has seen enormous change over the last 10 years. To demonstrate this, we have compared all of the braking data for the single-seaters in the 2008 Canadian GP and the 2018 Canadian GP. 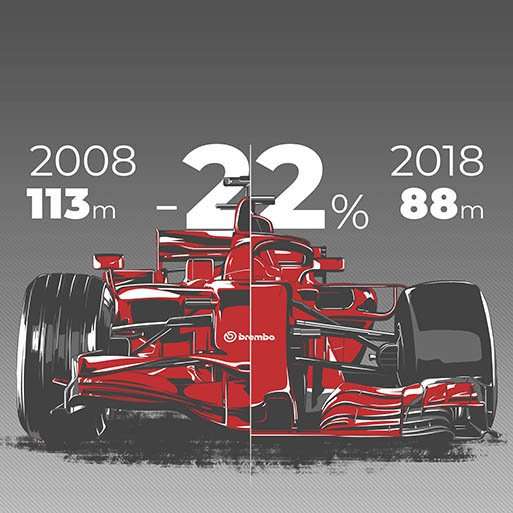 The most surprising data stems from a comparison between the two GP races regarding the stopping distance, which went down by a full 22.2%. In 2008, braking at Circuit Gilles Villeneuve required on average 371 feet; this year, 289 feet were enough.

Naturally, we are talking about an average since data varies significantly, even though the trend is the same. On the second to the last corner, the one that leads to the Wall of Champions, this year the single-seaters traveled 322 feet while braking and 10 years ago, at the same spot, they needed 384 feet to brake.

Although noteworthy, the reduction in braking time did not experience the same dramatic decrease as the stopping distance. From 2008 to 2018 in Montreal, the time spent braking per lap went down by a few seconds, a figure equivalent to a 15.5% reduction.

This may seem minimal, but to demonstrate its importance, we have provided this statistic: 10 years ago on three of the corners of the Canadian circuit, the drivers used their brakes for more than 2 seconds and on one of these turns, they did so for a good 3 seconds.  This year, the most time spent braking was 2.44 seconds at turn 10 and 2 seconds at turn 13.

While the braking distance went down by 22%, the time spent braking decreased by “only” 15% for one reason: the force drivers apply to the brake pedal has increased, just like the power of the Brembo braking systems.

In 2008, on average, the drivers applied a load weighing 284 lb on the pedal at each corner of the Canadian GP. This year, the average load measured 295 lb. This 4% increase has made the driving style of the pilots even more important.

Besides there being more force applied by the drivers, the power of the Brembo braking systems has increased just as decidedly. From 2008 to today, the properties of the aluminum-lithium alloy we use on our brake calipers have evolved.

Today’s calipers are characterized by more complex geometries, which are heightened by continuous research into optimizing the stiffness to weight ratio and by more and more efficient shapes to obtain the cooling these single-seaters require. 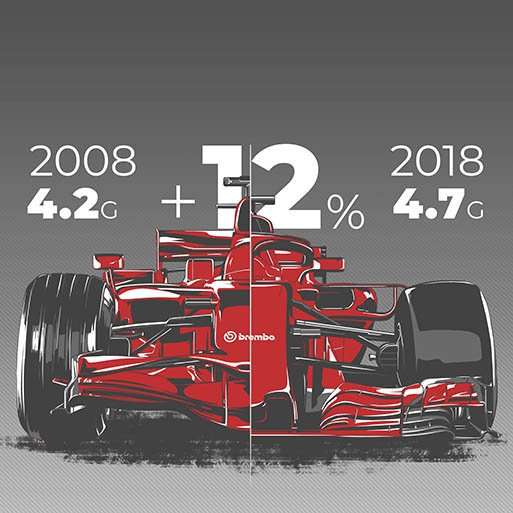 Faster, wider tires (resulting in a growing ability to dissipate brake torque) and a higher performing Brembo braking system, submit drivers to a deceleration that is far greater to that of the past. In 2008, the average peak deceleration per lap in Montreal was 4.2 G, and in 2018 this same figure went over 4.7 G. This is an increase of 11.9%.

On turn 8 of the Canadian GP, the drivers experience 4.9 G of deceleration compared to 4.4 G in 2008. The difference found on turn 1 is even more significant, both overall and in percentage: it has gone from 3.7 G ten years ago to 4.8 G this year.

Similar variations were registered on the other tracks that hosted a Formula 1 World Championship race in 2018. All of this would be even more evident on a track like Monza, where the peak deceleration in 2008 never went over fiveG. But this year, according to calculations made on a simulator, none of the six braking sections will be lower than 5.1 G and when the cars enter the Parabolica, they will go well over 6 G. 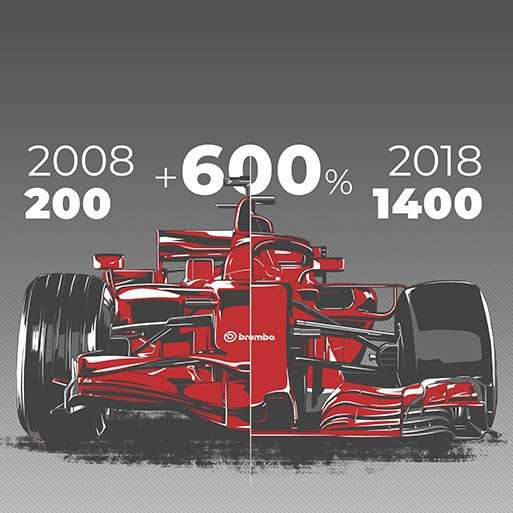 One of the components on the braking system that went through a visible transformation is the brake disc.

Over the course of the ten years, advancements in research enabled Brembo to progressively increase the number of holes and decrease the dimensions. Ten years ago in 2008, there were about 200 ventilation holes on a Formula 1 disc.

Barely fours years later, the number tripled reaching 600 holes. Still, innovation continued and on the Formula 1 single-seaters racing in 2014, the discs had more than 1,000 ventilation holes.

Increasing the surface of the disc exposed to ventilation ensures greater heat dispersion and a reduction in operating temperature. The temperature of the carbon discs used in Formula 1 can get up to 1,832°F for brief periods.

Since 2017, the discs have grown in size from 28 to 32 mm, which allows more space for the ventilation holes and results in further advancements in the evolution of braking system cooling.

Today, each Brembo brake disc can have up to almost 1,400 ventilation holes in the most extreme version, which is about 100 more than the number of holes on the discs used in 2017.

The holes, positioned in four different rows, measure 2.5 mm in diameter and are made one-by-one by a precision machine. It takes 12 to 14 hours to make all of the holes on a single disc. At this level, precision is everything: the mechanical component tolerance is only four hundredths.

These days, the pads have to dissipate a lot more energy. In Canada ten years ago, the temperature of the discs at turn 10 got up to a maximum of 1666°F and this year they got to over 1832°F at the same spot.

To remedy this problem, more in-depth research went into the shape of the pad itself. The pads have ventilation holes that are customized according to the requirements of each team. 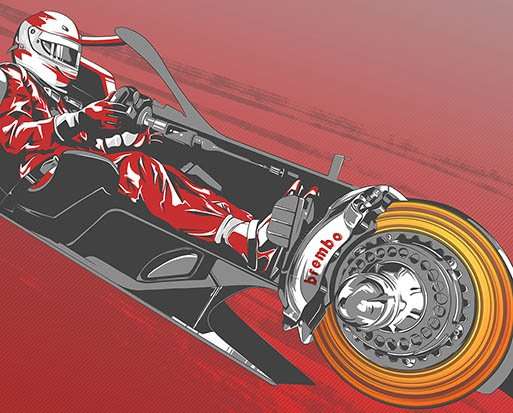 Over the course of the last ten years, the brake caliper has experienced a somewhat inconsistent evolution. On one hand, the choices available for the track became simpler, on the other hand, the amount of personalized developments for each team has become more and more prevalent.

In 2008, there were different calipers depending on the circuit the single-seaters were racing on, which caused some issues in terms of selection and made replacing them in an emergency with ones designed for different tracks impossible. However, for a few years now the teams use just one type of caliper for all of the circuits raced during the season.

At the same time, development became increasingly complex. Today, contrary to 10 years ago, Formula One requires braking systems that are highly customized according to the different design choices made for each single-seater. Each team Brembo supplies asks for an increasingly tailor-made braking system that is closely integrated with the design of the single-seater and is subject to continuous developments over the course of the season.

For example, the brake caliper is perfectly integrated with the cooling system for the corner of the car (air ducts, drums, deflectors, etc.) and with the aerodynamic solutions developed by the individual teams, making each component unique.

Plus, driver preferences influence the different combinations of stiffness and weight. There are teams that prefer lighter calipers because they need to lower the weight of the car, even though they lose in terms of stiffness. Other want stiffness to the detriment of the mass.

Overall, in the face of a weight reduction of just 15% compared to 2008, the brake caliper processing is now much more complex. 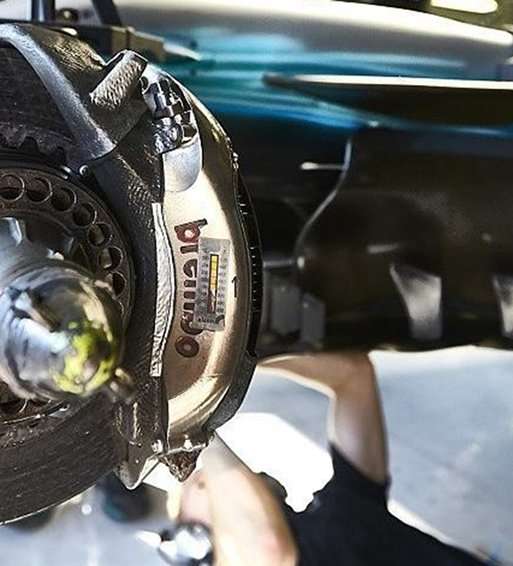 Under normal operating conditions, the rear system is no longer activated directly by the driver, but by a high-pressure hydraulic system on the car (much like the ones for suspension and power steering) by means of an electronic vehicle control unit that keeps continuous track of the braking force linked to the two MGUs and the braking distribution imposed by the driver.

The amount of energy to dissipate on the rear axle is equal to the reduced friction, since it is recovered in part by the MGU-K: the result is a less cumbersome and lighter caliper. This is why, in addition to the traditional 6-piston calipers, the maximum allowed by regulation, Brembo supplies several teams with 4-piston calipers to be used at the rear, which responds to their requests for lighter systems.

Lando Norris walks back Hamilton,…
Oct 28, 2020 by Fabio
Max is still spewing out diatribe, he did call Lance ...

Lando Norris walks back Hamilton,…
Oct 28, 2020 by Xean Drury
Can we also address that Lando Norris just isn’t that ...