The amount that F1 cars develop during the season is virtually impossible to quantify. Teams make bold assertions that their latest wing or suspension change will find them two or three tenths, but as all their competitors are developing at the same time, it is very hard to judge if these times are actually correct. This winter, with Force India bringing their 2014 car to the second pre-season test (the first four days at Barcelona), there was the opportunity to compare the laptimes of a 2014 car at the end of its development to the new 2015 cars just completing their pre-season testing. We can also look at the times recorded at the Barcelona circuit in 2014 during the race weekend and the two day in-season test that followed, to try and gauge just how much the cars have developed.

Looking at the best laptimes recorded by each team during the eight days of running at Barcelona during pre-season testing we can see that only the 2015 Force India and the McLaren were slower than the 2014 Force India: 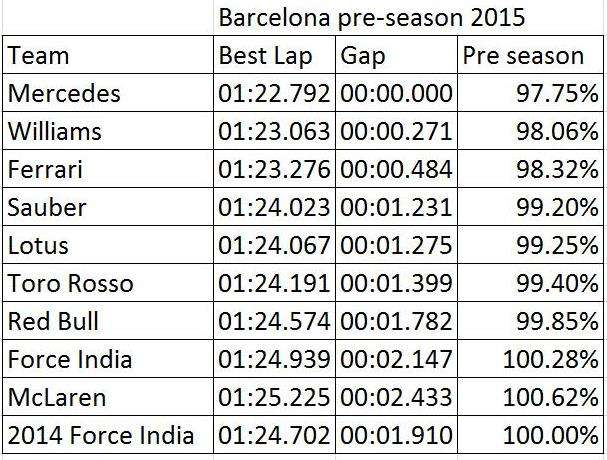 This in itself isn’t that surprising, as the Force India only had two and a half days of testing, and the McLaren was beset with many problems and also had limited mileage. However it is also important to remember that the 2014 Force India was very much a back marker come the end of last season, its development having slowed dramatically during the latter part of the year (possibly due to budget issues).   In qualifying for the final Grand Prix of the year at Abu Dhabi, only Sauber and Lotus were slower (again taking the fastest times of each team). I have ignored Caterham and Marussia in this analysis as they were not present in the pre-season test this year. In fact if we take the 2014 Force India as a baseline, and compare the fastest lap of each team over the Grand Prix weekend at each circuit throughout 2014 we get the following graph:

The Force India is represented by the orang line which is steady at 100% through the year (until the 2015 pre-season test, when this season’s car is slower than last). At the beginning of last year, Force India were a mid-field team, with five teams faster than them and three behind. By the Chinese Grand Prix, they had moved forward with no only three teams in front and five behind, and the pack had closed somewhat even if Mercedes and Red Bull were still some way in front. The following race (Spain, the first European race) most teams brought new parts to fit to their cars, and Force India moved backwards, with now only Toro Rosso and Sauber behind them. As Toro Rosso improved, Lotus dropped behind, briefly joined by Williams at Monaco. Apart from a blip in Britain when they fell right to the back of this group, this situation remained until the end of the year.

In a similar way you can see how the blue Williams line starts off only just ahead of Force India, and has some fairly dramatic movements early in the season, even being in front at Austria, before slowly catching up to the dominant Mercedes, they certainly out-developed both Red Bull and Ferrari who were Mercedes closest challengers in the early part of the year before falling away from Japan onwards.

While this graph is useful to show the relative development of the teams through the year, it still doesn’t help to understand the absolute improvement that each team has made. It is also important to note that this is a comparison of the fastest lap set by the teams (usually qualifying, but sometimes free practice if qualifying is wet). It is not necessarily an indication of race pace, which is somewhat harder to measure due to drivers needing to conserve fuel and the effects of safety cars.

To try and understand how much the current cars had developed, I compared the times set in the Barcelona pre-season test with the fastest lap set by the teams at Barcelona in 2014 (the Grand Prix weekend and the two day test that followed). The figure in the Improvement column is the pre-season testing lap as a percentage of the best 2014 lap: 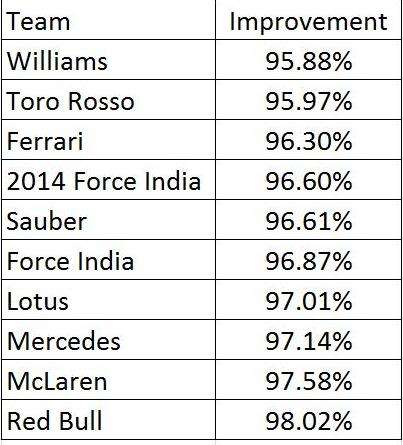 This shows that the Williams is the most improved car, despite all the protests from their drivers that Ferrari are the team on the move. Now as the Barcelona Grand Prix was early in the season, and Williams made a substantial improvement during last year, it is possible that their improvement since the end of last season isn’t as great as Ferrari, but since the teams last raced at Barcelona Williams have made the biggest step. Oddly, Mercedes are one of the worst in terms of improvement since last year, perhaps their drivers pushed each other particularly hard in qualifying in Spain in 2014, or maybe they didn’t really show how fast they can go in testing. 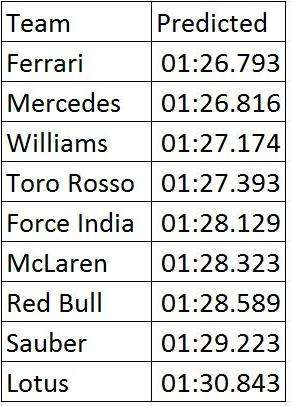 Now, I know this will please the one or two Ferrari fans of this site, but we need to remember that the Mercedes never tested on the super soft tyres, so they could be hiding their true pace. What is really surprising is the relative positions of Toro Rosso and Red Bull, and also how low Sauber are given their testing pace. This makes me doubt the validity of the table, but I include it just to see if any of the times are close to those that will be recorded in qualifying next week.

On top of that, Lewis was saying that it was…

Previous article
Teams head to Oz with £52m payday
Next article
Some things are worth saving, like energy, money and Manor GP