If you’ve been following our stories regarding the protests in Canada, here and here, then you may be interested to know that the group ‘Anonymous’ has once again targeted Formula One as the center of their next attack on June 10th according to the group’s statement:

“As we did in Bahrain – Anonymous intends to wreck Mr Eccelstone’s little party,”.

“Beginning on June 7 and running through race day on June 10, Anonymous will take down all the F1 websites, dump the servers and databases – and wreck anything else F1 related we can find on the internet.

“We would like to remind anyone considering attending this abominable race, that last time Anonymous found all the spectators personal data, including credit card numbers – un-encrypted on F1 servers.”

Anonymous will be among many protesters targetting the Grand Prix. A number of students are also set to protest, something that the F1’s orginisers will be wary of, considering the race could bring around $100 million (Canadian dollars) to the area.

“We highly suggest that you join the boycott of the F1 in Montreal and we certainly recommend that you NOT purchase any tickets or F1 merchandise online.

“You have been warned.”

The group were successful in shutting down the official F1 website in retaliation over the racing series’s decision to attend the Bahrain Grand Prix amidst protests and what the group claimed were human rights violations. As there have been deaths in the Kingdom nation associated with the protests, one can find it difficult to argue the logic behind the claims of human rights abuses.

Also concerning is the warning to “not purchase any tickets” from the Formula 1 website as the group discovered credit card and personal data un-secured on F1’s servers in their last attack. Customers who will or have used the website to purchase products or services may be at risk according to the statement’s innuendo but it is unclear as to if they retained any of the un-encrypted information they say they witnessed in their first attack.

The group cites Bill 78 as their reason for attacking Formula One during the Canadian Grand Prix for going ahead with the race where “Amnesty International and other global human rights groups have declared human rights violators”. Wikipedia describes Bill 78 thusly:

Bill 78, is an emergency law passed on 18 May 2012 by the National Assembly of Quebec, Canada. The law restricts freedom of assembly, protest, or picketing on or near university grounds, and anywhere in Quebec without prior police approval. The law also places restrictions upon education employees right to strike. Bill 78 was drafted by members of the Quebec Liberal Party, introduced by Education Minister Michelle Courchesne, and passed with the support of the Coalition Avenir Québec party in response to ongoing student protests over proposed tuition increases. The law is also identified as L.Q., 2012, c. 12 (Laws of Quebec, 2012, chapter 12).

From Tuition to Human Rights 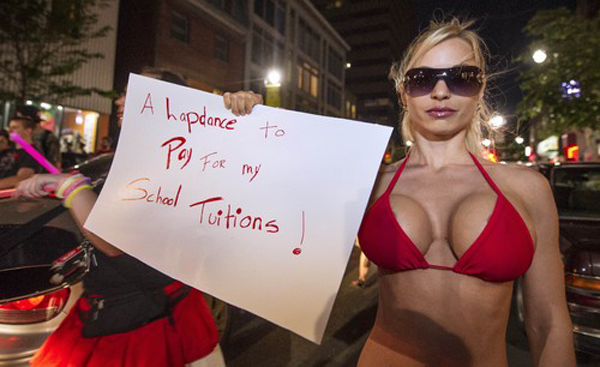 The protests kicked off over an increase in tuition and students have been protesting that has escalated in the disruption of public transit, property damage and altercations with police. Amnesty International said:

What began as protests led by student groups in Quebec over a proposed hike in tuition fees 14 weeks ago have expanded in size and focus in recent weeks, with more than 2,000 arrests being made. On 23 May alone, police arrested close to 700 protesters in several cities.

Daily, largely peaceful demonstrations have been attracting a wide range of civil society groups in several cities – some in Montreal, Quebec’s largest city, have drawn up to 200,000 protesters.

Considering the amount of people who attend the race weekend can be slightly north of 200,000, having a throng of protesters disrupting events and otherwise congesting an area of the city may be difficult for F1 fans to navigate should a mass protest materialize around the Anonymous call to action during the race weekend.

Previous articleA Tale of Two Veteran Rookies Pt. 3
Next articleWebber on his Monaco victory: ‘I grabbed the right one’