I may be missing some form of official communication from the FIA regarding Carmen Jorda but she tweeted that she had been appointed to the FIA Women’s Commission and that she would be able to represent and fight for women in motorsport.

Delighted to be appointed to the @FIA Women’s Commission & have the opportunity to represent & fight for women in motorsport. #DrivingChange pic.twitter.com/n27tuANmR9

Her Tweet seemed to dovetail what the mission of the organization’s commission is:

“To create a sports culture which facilitates and values the full participation of women in all aspects of motorsport.”

The issue drew lots of ire on Twitter with F1 journalists weighing in and many folks not just airing their dislike of the choice but getting outright abusive with their comments towards Jorda and her Twitter account. Racer Pippa Mann was very displeased with the choice as well and took to Twitter to share thoughts on being represented by Jorda.

Dear @fia,
If the news I am hearing is correct, and you have appointed a racer with no notable results, who does not believe we compete as equals in this sport, to represent women in racing, I am incredibly disappointed.
Sincerely -an #Indy500 qualifier, #IndyLights race winner.

The reason being that Jorda has voiced her concept of having a separate F1 championship for female drivers only. On one hand, some folks view this as antithetical to the cause because it keeps women segregated from the actual racing series. It draws a line between men and women when many believe that there should be no line, just better opportunities for women to have a chance in a male dominated industry.

On the other hand, some argue that the opportunity issue is a barrier for women in motorsport and cite how difficult it is for young men to get a chance to drive let alone women. A female series would provide a path for more opportunities to drive, train and have a consistent program to develop talent with the reward as an opportunity to move over the F1’s main stage. In effect, a feeder series like GP3 or GP2 but for female drivers. It would ensure that females are consistently driving, racing and preparing for F1.

There is the other commentary Jorda offered about the differences between men and women and the physical aspect of F1 that didn’t go down well either and I’ll let you draw your own conclusions on that one.

I understand why the mobocracy in social media has gone ballistic and I can appreciate the sentiment but what I do find unfortunate is the personal attacks toward Jorda. Many use her lackluster driving career record as proof she is a terrible race driver, has no skill and no right to be representing women in motorsport because of it. That seems a little harsh to me if not antithetical to the point. So she didn’t achieve much in racing and isn’t as talented as Lewis Hamilton therefore she isn’t a female in motorsport? She is a female in motorsport, just not a very successful one—maybe that’s the point.

I could be completely wrong here but I also think her position on a female feeder series could come from her personal experience and lack of results due to skill limitations or even, perhaps, opportunity. There is no doubt that as a female racer, she’s not at the top of the list. For her, perhaps a feeder series would have helped her develop better skills and provide an opportunity to do more driving. I don’t know this, I am speculating but perhaps that’s the context.

When you juxtapose that with a racer that I have always enjoyed and respected, Simona de Silvestro, she worked hard, made her opportunities and fought on the same level as the men around her. She wasn’t interested in a female-only series to get more driving skills or provide a bi-weekly opportunity to drive, she simply made it happen. She had an Indycar career, a brief stay at Sauber, scored points in Formula E and is driving in Australian Supercars.

Leena Gade, also a member of the group and a very successful race engineer with championship-winning Audi, is also on the FIA commission and said:

I’m in the commission, an ambassador 4 engineering. I’m addressing this with them b4 commenting further BUT I chose to compete in a man’s world, like so many other women in countless Motorsport roles. WE want to be the best against males & females. Can’t do that?Play another game https://t.co/P1uHC6SNlN

Leena is right, can’t play? Find another game. In motorsport there is no guarantee of equal opportunity but true skills, hard work and dedication can breed opportunity. To be honest, I have spoken to enough young drivers to know that this is very difficult for young men as well as young women. The underlying notion is that given equal skills, would a man be chosen over a women? Is that where Carmen Jorda can help the FIA? Perhaps not if she’s looking to form a female-only series regardless of her personal context and justification for that series.

I am willing to bet that leaders like Leena have given teams reason for pause in making a knee-jerk reaction of always hiring the man over the woman. Any sport requires pioneers to forge a path and Leena, and many other women in motorsport, are dissolving that notion. But they aren’t doing so by promoting women miscast for the play. The women who are succeeding are there on merit, have the skills comparable to any other person and in many cases forged an opportunity from a male dominated industry. There is nothing easy about that but there probably wasn’t much easy about Lewis Hamilton’s quest for F1 glory either. Regardless of gender, you have to have the skills to play the game, as Leena says. 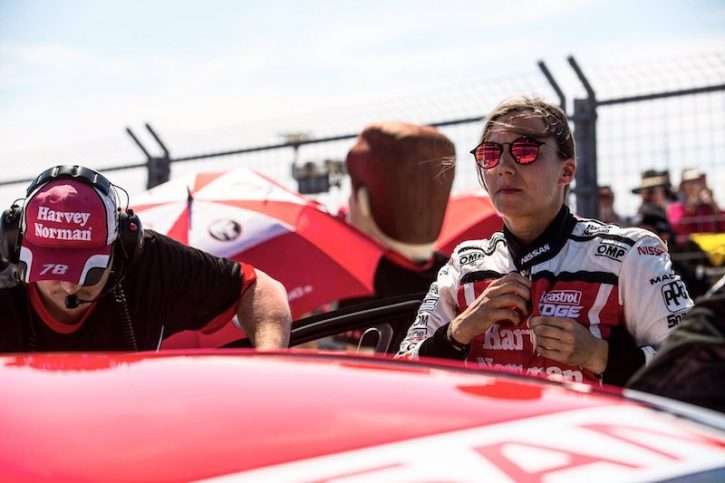 This may be why people are using Jorda’s lack of results as proof of questionable skill and therefore not the person to represent women in motorsport. The thought may be that she is miscast for the play and not in this role on merit. To be fair, it is difficult to imagine a woman like Leena or Simona being represented by Carmen.

Still, the personal attacks are over the line. Is it only the most successful women in motorsport that can best represent other women aspiring to be in motorsport?

Susie Wolff has done a tremendous job with Dare to be Different and was the first female in 22 years to participate in a Formula 1 weekend back in 2014. She hasn’t won any F1 championships nor had any race wins in her professional career. Pippa Mann has had one race win in her career in Indy Lights.

Simona de Silvestro has six race wins and finished in 3rd in the Atlantic Championship. If it takes accomplishments to represent other women, then clearly Simona would be better positioned to lead Dare to be Different or the FIA women’s commission? No? That’s clearly a rhetorical question, folks.

If not, then could Carmen actually do well in this role? Could she actually achieve more in promoting women in motorsport than actually achieving race wins? Perhaps not as the stigma is pervasive in this appointment. In some ways, that’s a shame but I understand why folks feel that way.

Should be Simona de Silvestro or someone who actually has the right ideas.

Jorda’s comment says she was appointed to the role.
Do we know anything about the appointment process?
Maybe you had to apply for the role, and others, potentially with greater qualifications, didn’t apply?

You have to apply for the role. Usually there are many applicants for roles on FIA committees, as they are considered an honour. This makes me wonder if there is something we’re not being told about the unusual undesirability of this position – or if the FIA is specifically looking for Carmen’s committee-contradicting views to forward a hidden agenda.

I’ve just had a look on the FIA website, the Womens Commission consists of 32 members, so Jorda’s views are unlikely to be dominating. The site has the 2016 commission composition. https://www.fia.com/fia-women-motorsport I don’t know if its ‘all change this year’, or if there is come carry over, but the 2016 commission has some very credible names. Michelle Mouton is Chair, Monisha Kalternborne and Clair Williams represent Teams, Leena Gade (ex Audi WEC) represents Engineers. I don’t recognise any other names, apart from Ms F Ecclestone, representing Brazil, and according to Wikipedia, Bernie’s wife is called Flossie, and is from… Read more »

Carmen didn’t achieve as much as other women in lesser cars (the car Carmen failed to score a GP3 point in was a title-winner for her team-mate, while Alice Powell scored a point with a midfield car in the same year). She then claimed this was because women were naturally less capable than men (rather than because she herself wasn’t as good as most of her rivals regardless of gender). She then tried to tell us that this meant women should be put in a women-only championship conveniently close to when a bunch of chancer businesspeople want to put on… Read more »

Just because you are a successful racer doesn’t mean you know how to work on a commision, which is essentially political job.

You know, it used to be considered a good thing for a committee to include a diversity of opinions and positions. A dissenting voice can strengthen the final result, by helping the group consider the impact on constituents who have a different viewpoint and avoiding choices at either extreme.