I’m not entirely sure I understand this tweet that ESPN F1 re-tweeted. It would appear to be shaming F1 for it’s 2023 calendar as not being sensitive to their efforts to be carbon-neutral by 2030. It would appear to suggest that F1 is a carbon-holic and tone deaf to the program they’ve publicly offered regarding sustainability and their goals.

It was even more confusing when I read all of the comments on this tweet, and ESPN’s, when people were castigating F1, calling for it to stop existing, shaming their “illogical” transportation path (Austin, Mexico, Brazil, Las Vegas) and worse. 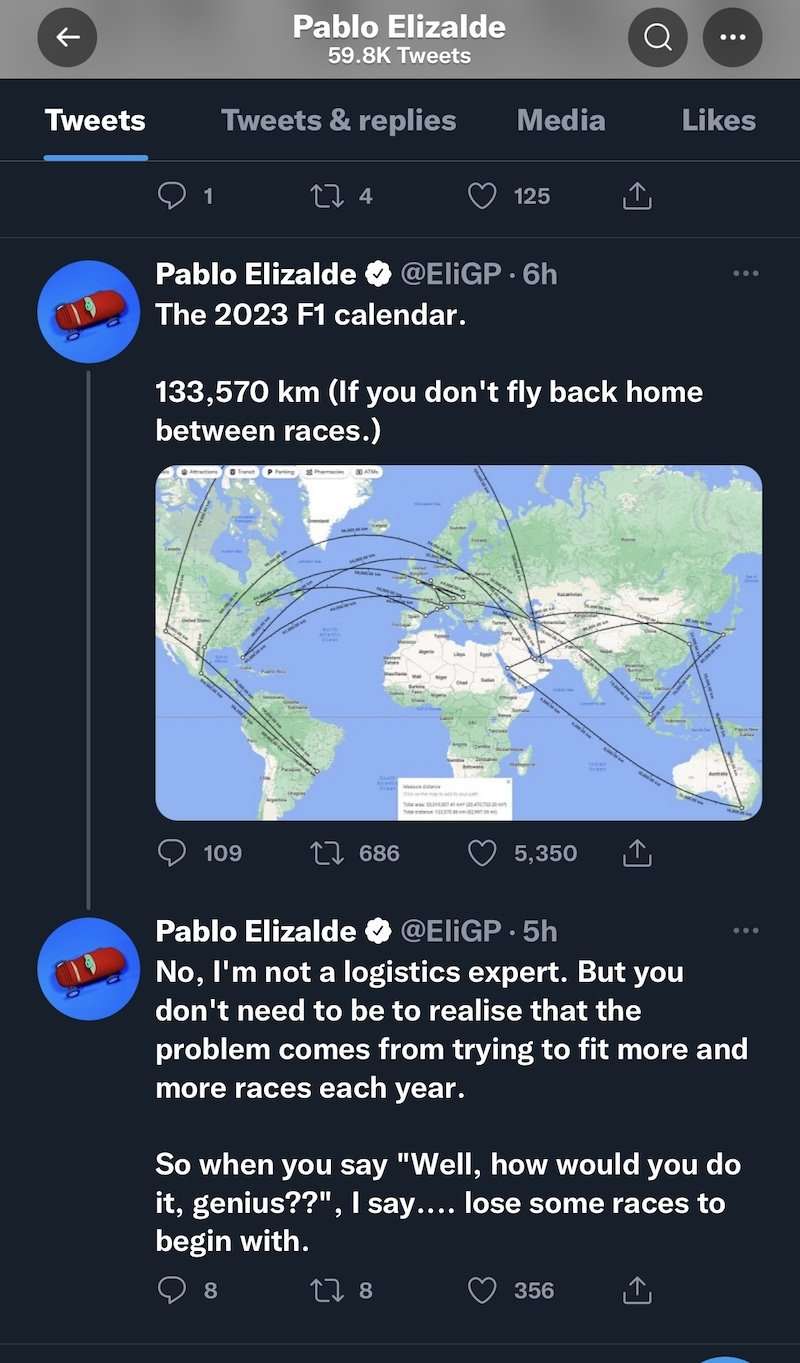 I understand the casual passer-by who commented about why they would arrange the schedule like that when they should start at one location and then make their way east or west in succession based on next closest race. I could be a bully here but I will refrain.

Let me just say that every track F1 races at isn’t waiting all year for one single race. Track economics means that these locations have all kinds of racing events all year long that F1 has to work around. Sure, in some locations they carry more weight than other series but F1 doesn’t own these circuits and they do not have the definitive say. F1 has to also work around other major sporting events like Le Mans, Olympics, and World Cup etc. They want to avoid major events that compete for eyeballs during a weekend.

Also, we are moving from southern to northern hemisphere locations and weather is a major factor. Some seasons are more rainy than others, hotter than others and colder than others at different times of the year so F1 has to find the right month/day to race in each location for the best chance to have a race with favorable weather.

When you read F1’s program, you get a clearer picture of the efforts they are going to in order to achieve their goals. From synthetic fuels in 2026 to better logistics, less transport redundancy, more kit stored in different regions so the travel for that kit is far less than if it was brought from the UK for each race.

What is more concerning is that the author of this tweet knows this and so does ESPN so why would you post something like this and not correct some of the outlandish comments left on the tweet? Sure, perhaps the original tweet was simply discussing the team drivers and personnel but F1 knows this. They have factored this in their program. Also worth noting that not all personnel live in the UK. 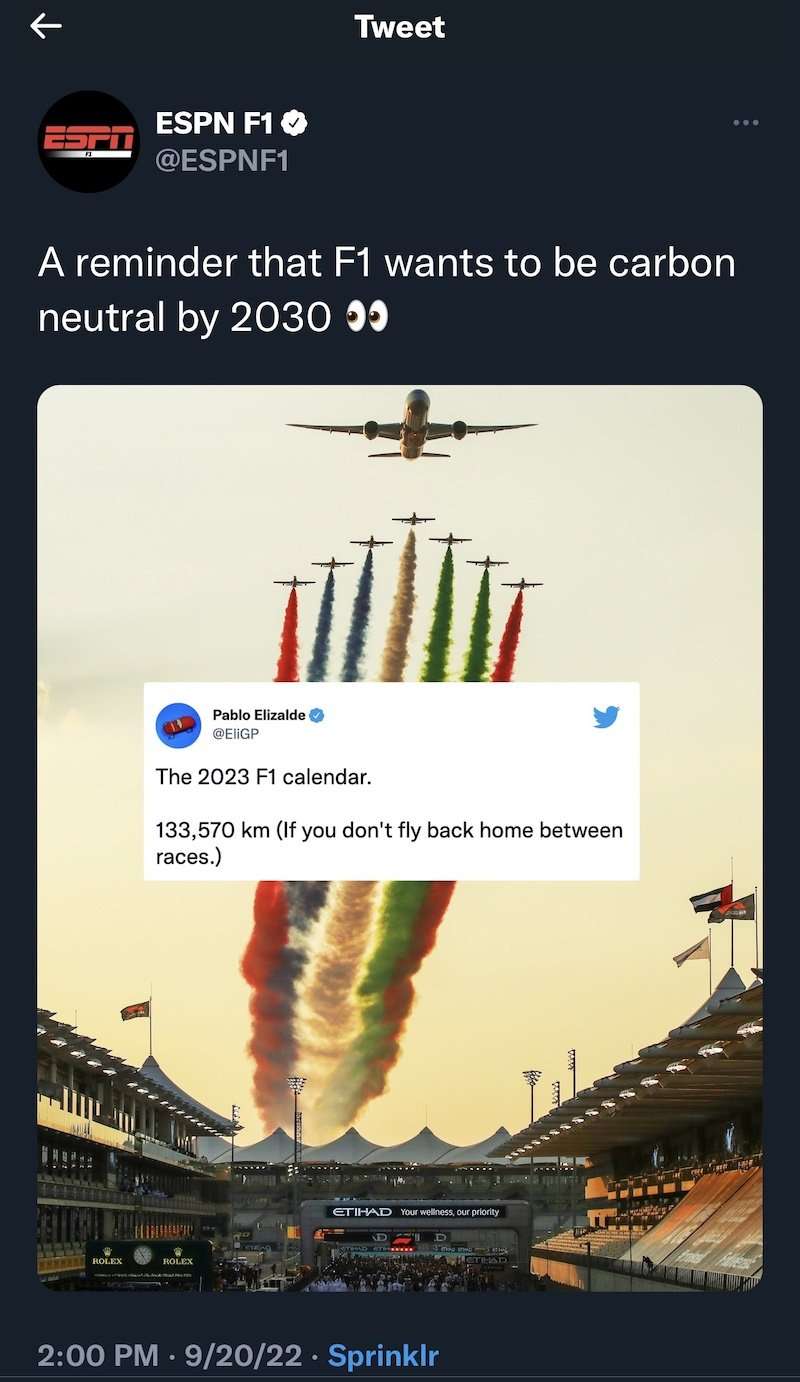 To be fair, I don’t want to be insensitive to those who see this schedule, don’t like the impact it might have, aren’t sold on F1’s sustainability program, don’t believe Formula 1 will achieve carbon neutrality by 2030 or would prefer F1 simply stop. That very well could be your opinion and that’s fine. I would argue that F1 may not be the sport for you if these issues upset you. A global racing series is going to have to travel the globe so maybe a local series might be a better option for you?

The bigger issue, per the author’s follow-up tweet, and his point is well taken, might be something like this…so how many races is ok? What number? Five races? Is that too many? What about 10 races, would that be ok? What number? Judging by the comments on this tweet, there are many suggesting that one race is one race too many.

It just seems a bit off in my opinion from a news organization that covers the sport, broadcasts the sport and knows the program F1 has created. There are a ton of factors that go in to creating an F1 calendar and I doubt the series takes any of them lightly. Least of which is how to reduce their travel cost and impact. I have a lot of respect for both the author and ESPN but surely ESPN knows this?

I think this is unfair to both Pablo and those who raise their eyebrows at F1’s carbon neutrality pledge. Knowing the effect that air travel has on carbon emissions, and seeing the way races are situated geographically it makes sense to question F1 and LM. And to say “F1 might not be for you” is kinda insulting when the original tweet isn’t calling for the abolition of the series, just pointing out that sometimes you can’t have as much cake as you want (credit for carbon neutrality) while eating it all as well (growing the race calendar and not cutting… Read more »

If F1 were to share information about what technologies they are using that make for more efficient logistics for example, I think you would see many fans who also care about the impending climate crises would be happy to see that. That is something F1 could do that would be much more impressive than making their already impeccably efficient race cars run on renewable fuels for example. But F1 has not earned the benefit of the doubt from fans or onlookers for us to assume that they care about more than increasing profits, and it’s not unfair to question them… Read more »

First, I am not suggesting Pablo or ESPN were calling for the abolition of F1, the people in the comments on the tweet were. If I didn’t make that very clear, that’s my bad. There were comments that one race was one race too many and for that person, I suggested that it may not be the racing series for a person who feels that way (maybe Formula E would be more appealing). Pablo said fewer races would be his solution, I asked, how many? What is the number of races he or others would be fine with? Ten? Five,… Read more »

I agree with you, Todd. In my opinion, this really smacks of trying to generate outrage and cheap “engagement” from followers.