I arrived at Texas Motor Speedway precisely at the test’s 8:30am start time, only to find the KV Racing IndyCar of Rubens Barrichello already on track.  I strolled up to the team’s pit box just as the dark blue Dallara DW12 rolled to a stop, only for Tony Kanaan to hop out of the cockpit, while Rubens, visibly nervous, waited on the pit wall.  TK immediately sat down next his Brazilian countryman and began giving further instruction and advice to what he had assuredly been giving Rubens over the past few days and weeks. 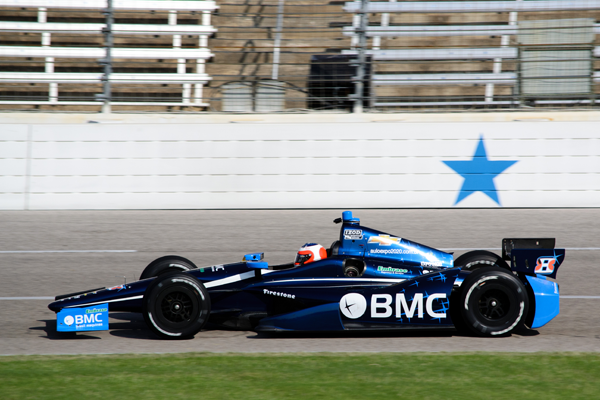 As Barrichello began suiting up, I leaned in and asked how the previous day’s Rookie Orientation had gone.  “I didn’t get to drive, so this is my first time out there.” He replied, with quite a bit of tension in his face.  Engine troubles had kept him from running the planned test alone on Sunday and, now, the most experienced driver in Formula One history looked almost as if he were stepping into a race car for the very first time.  Kanaan, meanwhile was rarely more than an arm’s length from the lifelong friend who he often refers to as his ‘brother’.  More than a brother, though, Tony looked like a nervous father pacing in a delivery waiting room.

As soon as Barrichello finally sped out of the KV pit box, Kanaan was standing in the middle of the pit lane, phone in hand, Tweeting pics of his ‘trainee’.  When Rubens came back in after a number of laps, Tony was immediately sitting on the sidepod, listening to Rubens and giving further instruction.  When Rubens left the box again, TK walked past me laughing, saying that Rubens was huffing and puffing in the car, trying to catch his breath.

After three sets of multiple laps on track alone, Rubens brought the car back in and got out, as IndyCar had deemed his rookie orientation a success.  As the series opened the track to the other ten drivers taking part in the open test (Castroneves, Power, Briscoe, Franchitti, Dixon, Conway, Rahal, Cunningham, Kimball and Carpenter), Rubens conferred with the team for several minutes  before heading back to the team’s infield garage. 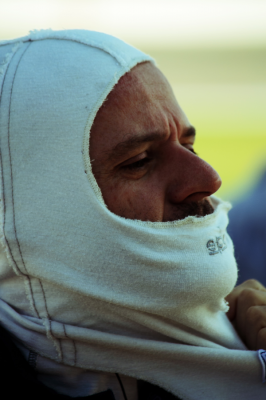 I walked with the eleven time F1 winner, getting a handful of moments to ask a question or two, as well as to take a photo for a Brazilian fan who had been waiting patiently for a chance to meet his hero.  With a laugh on his thoughts of Texas so far, Rubens said “Well, it’s a pretty big place so I won’t get to know it in a couple of days, but I tell you I’m a big fan of America and this is a chance for me to visit places that I wish I had before and it’s a great pleasure for me to be here in Texas and I’ll be coming back for sure.”

As for his first time on an oval, Rubens stated, “It’s an exciting situation.  It’s so new to me.  I went out and I was doing 187s (mph) and it was bloody fast and then at the end I was doing 206 and it was okay.  So it’s a question of getting used to it, but I am enjoying big time the challenge.  When you’re about to turn forty and you’re going faster than you ever did, that’s a big challenge.”  In a response to how his body handled the first oval laps, he said that when he got out of the car, “Everything was to one side, so I got a little wobble, but Tony had told me before the test that this would happen and that it was normal.”

The test day was broken up into two sessions, morning and afternoon, with a press conference between the two.  Along with Scott Dixon, Helio Castroneves and IndyCar points leader Will Power, Barrichello took some questions from the handful of media on hand for the test.  He began answering questions with a rather amusing tale. “I could tell how excited I was because I slept last night thinking about it (his first oval test) and I woke up at the other end of the bed, so I was already ovaling in my dreams.”

When asked about the difficulty of driving the oval, Rubens said that, in F1, it is difficult in some corners to go flat through them whereas, here, it is not hard to go flat but it is difficult to hold your line through the corner whilest going flat.  “I’m still not at peace with the whole situation with the car.  I’m driving well, but I’m not driving my best because I’m not familiar with everything.”

Queried about what he would tell F1 drivers about driving at 200 plus MPH while right up against a wall, Rubens gave a rather politically correct answer.  “Knowing all the guys in Formula One, if you throw 100% of them over here, 50 percent would like it and 50 wouldn’t.  That’s as far as it goes.”

Your’s truly got the last question in on behalf of F1B.  I asked Rubens how his wife, who had initially not wanted him to race in the States, particularly on ovals, was handling his first oval test.  “She’s not here, but she’s calling every two minutes”, he answered with a laugh. 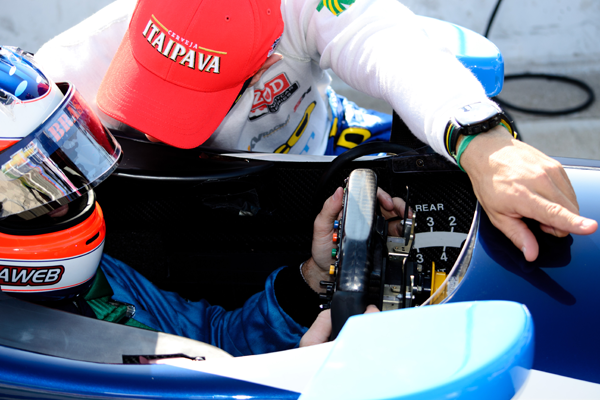 By the end of the test, Rubens had slotted in 11th amongst the 11 drivers taking part (Tony was ‘classified’ as 12th, but he had only warmed up the car for Rubinho’s Rookie Orientation test).  Barrichello’s best lap of 25.32 seconds, however, was just 7/10ths off of Scott Dixon’s fasted lap recorded over the course of the day.  Not bad for a ‘rookie’.

Many thanks to the fine folks at Texas Motor Speedway for giving F1B the opportunity to attend the test.

Race Report: Ocon wins Hungarian…
9 hours ago by Fred
Nice to see Haas in the points if only briefly ...