It’s hard not to view Formula 1 as a veteran or new fan without recognizing some of its most iconic graphics, brands and imagery over the past 50 years. Part of that imagery for me as a young lad were the amazing Grand Prix posters for old events such as Monaco, Silverstone or Monza. When I think back to the days of my youth, I can recall those posters with vivid recollection because there was something about them that stirred the senses and set the stage for the F1 theater.

Over the years there have been a few artists that have revisited that iconic era and produced nice work but this year there is a man who is not only capturing that golden era of F1 imagery but supporting a great cause.

Alex Sylt is a terrific artist but you may recall another Sylt, F1 business journalist Christian Sylt, which is Alex’s brother. Christian has always been very kind to us at FBC and has really helped us behind the scenes when we were having difficult times recalibrating with folks or moving our site forward. I caught up with Alex Sylt and asked him if he had some time to share with our readers what got him into the art of art and the business of charitable work. I think you’ll enjoy the Q&A as well as his terrific artwork: 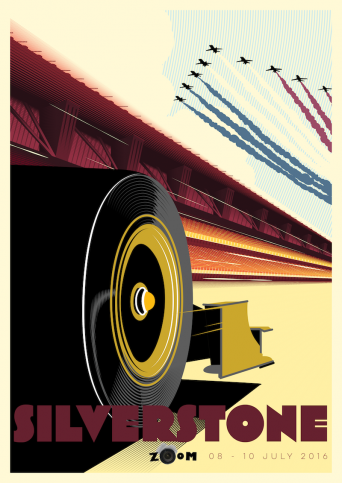 FBC: How did you get started?

Alex: This is one of those things that came about by chance but has grown into something significant. My main profession ia running a screen printing studio and my brother Christian writes about the business of Formula One for the papers. Early last year we went for dinner and I showed him my latest project which was a period-style poster for the annual exhibition at the artist studios where I’m based. We ended up discussing the racing posters produced during the very beginning of the European Grand Prix Championships and F1 in the 1930s to 1950s.

The image I was working on had an art deco subtleness and was comparable in style to these old generation racing posters so it sparked the idea of bringing this style back into motorsport posters as it wasn’t being done at the time.

It started with some posters for the first season of Formula E which were commissioned by the boss of the series Alejandro Agag. They went down a storm so the next logical step was to consider F1 which was always the aim as it has such a rich tradition of iconic racing posters.

The key to everything in F1 is getting approval from its boss Bernie Ecclestone and thankfully he has known Christian for a long time. We produced several test posters for him and got the green light to put them on sale with a share of the proceeds going to charities that Christian works with through the Zoom organisation that he set up in 2013. Each poster promotes a different race and benefits a different charity including London’s Great Ormond Street children’s hospital and Jackie Stewart’s Race Against Dementia.

What was the prime mover for creating these pieces?

I’ve always been a long time collector of artwork posters, especially screen printed artwork commissioned through private websites such as Mondo and Gallery1988. These posters have a large root in pop culture such as film and original artwork sold as limited runs in the form of screen prints. I thought that this idea would be perfect for the racing realm too as the history in art is already there.

F1 is world renowned and posters show its place in motoring and generational culture. The screen printed movie posters that I regularly collect (and spend far too much on!) have developed my interest in design, illustration and film so I’m imagining the same can be done for F1 and motorsport in general. Plus, the cars themselves from the ’30s onwards have inspired so many modern designs and are incredibly interesting to research, especially viewing them in the context of the evolution of the current 2016 car. 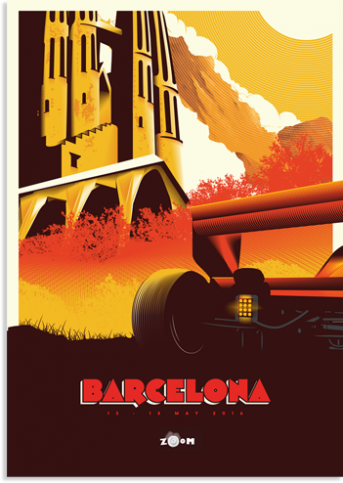 My Italian grandad was a huge fan of F1 for his entire life! More than anything he was a motoring fan. His shelves would always be littered with design books from various car manufacturers and he had close friends at famed Italian studio Pininfarina which created classic Ferraris in the ’60s and ’70s.

On one of his trips to England to visit my family in 2001 I vividly recall watching the Australian Grand Prix with him when Michael Schumacher notched up another victory in the heyday of his record-breaking winning streak. I’ve been a Ferrari fan ever since. I watched the races with school friends and collected models of the cars but as I’ve got older I’ve lost touch with the sport itself so I’m very happy this project is bringing me closer to it.

How did the tie-in come about with Zoom and now working toward the dementia issue that Sir Jackie is championing?

Jackie Stewart is another of Christian’s close friends and I think they have known each other for well over a decade. The two of them often go for lunch and regularly talk over the phone about the latest developments in F1. Christian told me that they met up in the paddock at the Canadian Grand Prix last month which was just before Jackie’s wife Helen was diagnosed with dementia. I believe that Christian had met her through Jackie and when he heard the sad news he wanted to help. Jackie recently set up Race Against Dementia, a charity to help find a cure for the disease, so it’s the perfect charity partner for

What struck me about Alex and his work is that charity is no stranger to he or his brother Christian as the Zoom auction has been a nice success within F1 to benefit Great Ormond Street Hospital Children’s Charity (GOSH). When Sir Jackie Stewart announced that Lady Helen was struggling with dementia, it was a difficult thing to hear and if you have ever known anyone with this debilitating disease, you will know the struggle is titanic.

The work Alex has done, along with Zoom Auction, is a breath of fresh air in a series that is often times considered introspective at the best of times and working with teams, drivers and even fabulous artwork like Alex’s to give back to the fans and friends is a real noble charter by anyone’s measure.

If you are a F1 fan, then Alex’s posters are a must. I can’t think of a wall in my office that wouldn’t look much better with the singular styling of one of Alex’s beautiful pieces or iconic motorsport art.

And let’s face it, with an Italian grandfather, Alex had no choice but become a Ferrari fan and who am I to complain about that? Great minds think alike. ;)

Check out all of Alex’s work here. 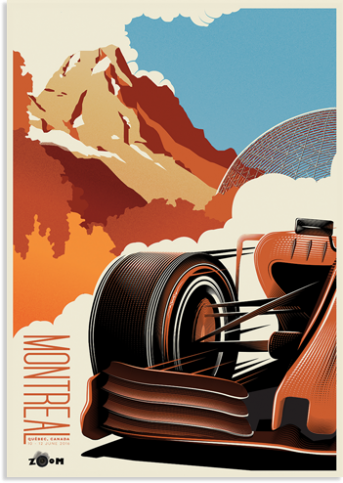 And you can get a great view of what Zoom Auction really does and the difference it makes here.