This week, Formula One lost arguably one of the most important individuals in the sport’s sixty-plus year history.  Professor Eric Sidney Watkins, better known to many simply as Prof, passed away on Wednesday following a heart attack, just a few days after his eighty-forth birthday.
Born in Liverpool in 1928, Watkins had worked at his father’s vehicle repair garage until he was twenty-five, while also attending the University of Liverpool.  Upon graduating as a Doctor of Medicine in 1956, Sid served in West Africa with the Royal Army Medical Corps before returning to the U.K. in 1958.  Now specializing in neurosurgery at the Radcliffe Infirmary in Oxford, Watkins began acting as Race Doctor for various race events at Brands Hatch and Silverstone.
In 1962, Watkins was offered a position of Professor of Neurosurgery at the State University of New York, so he moved to Syracuse, where he continued his endeavors in motorsport by working at Watkins Glen.  Eight years later, he would return to England as London Hospital’s head of neurosurgery.
A 1978 chance meeting with Bernie Ecclestone, who had checked into the hospital for a medical problem, saw Prof offered the position of Official Race Doctor for Formula One.  Watkins accepted the position which, though paying $35K annually, required Sid to pay for his own airfares, hotels and rental cars.  At the time, safety in F1 was mostly an afterthought, with trackside medical facilities often being nothing more than a tent and safety personnel usually consisting of a local, off duty ambulance service. 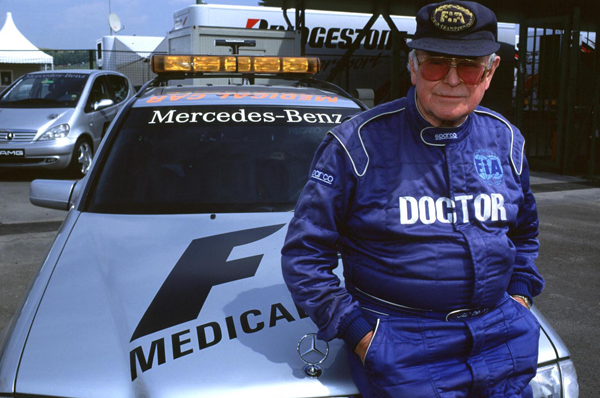