Much like the lead character in Monty Python’s “The Life of Brian”, Giancarlo Baghetti was born on December 25th, though not in a stable. In fact, it would be some 28 years before he was officially in a scuderia. By then, Ferrari fans could have easily mistaken him for the Messiah, for he did something that has never been done, before or since, in the history of Formula One. Sure, Nino Farina and Johnny Parsons did it in 1950, but those occurrences don’t really count, do they?

Baghetti had experienced a relatively successful career in junior formula, though he had not entirely set the world on fire. In 1961, however, he got the opportunity to move up the ladder when a group of Italian team owners formed a coalition called FISA (Federazione Italiana Scuderia Automobilistiche…or was it the People’s Front of Judea?). The federation’s objective was to get a car on loan from Ferrari for use by promising young Italian drivers in local non-championship Formula One races.

FISA were given a year old Formula Two 246P, Ferrari’s first rear engined prototype, the original test bed for the 1961 “Shark Nose” Dino 156, and Giancarlo was entered in the non-championship Syracuse Grand Prix, the first major race under Formula One’s new 1.5 Liter regulations. As the new 156 was not yet ready, Ferrari withdrew Richie Ginther’s entry, leaving a surprising Baghetti to qualify on the front row between Dan Gurney and John Surtees, ahead of F1 regulars Graham Hill, Jack Brabham, Jo Bonnier and Lorenzo Bandini!

Baghetti botched the start and lost seven places, but was miraculously leading by the end of the 6th lap, thanks to the Ferrari’s superior power. He would go on to win his first race in a Formula One car and would do the same three weeks later in his second F1 race in Napoli, though this time most of the front runners were running at Monaco for the ‘real’ Grand Prix.

Based on these results, FISA purchased a new 156 Dino from Olivier Gendebien and entered Giancarlo in his first points paying Grand Prix at Reims . Due to the oppressive July heat, all of the practice and qualifying sessions leading up to the French GP had been held late in the evening. By race time, the track had deteriorated so badly that work crews indiscriminately threw shovels of gravel into the newly formed holes, leaving the circuit littered with pebbles and globs of hot, new tar. 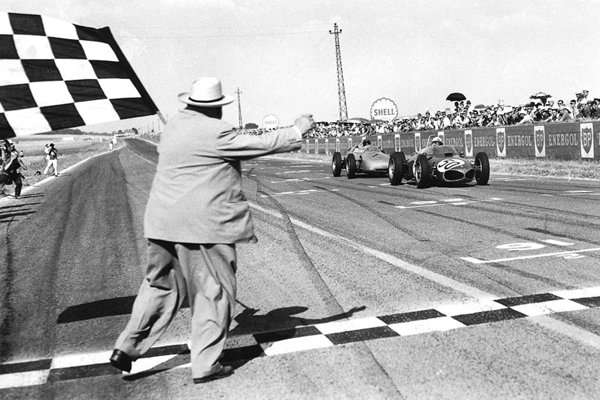 The factory Ferrari team of Phil Hill, Wolfgang von Trips and Ginther locked up the front row, with Baghetti slotting into a distant 12th behind the likes of Moss, Clark, Surtees, McLaren and Gurney, to name but a few. By the end of the first lap, the Ferrari trio were leading, with Stirling just behind, when Ginther spun from third. Moss got by briefly, but the American was soon back behind his teammates.

The heat and track conditions soon began taking their toll. Brooks, Brabham and Moss had all retired before Von Trips dropped out of the lead with engine trouble. By this time, Baghetti had moved into third behind the two remaining factory cars, but only just before Hill spun and collected the trailing Moss. A few laps later, the sole remaining factory Shark Nose of Ginther was in the pits without oil pressure, leaving the rookie in the lead of his very first official Grand Prix.

Hot on his heels were the Porsches of Dan Gurney and Jo Bonnier. Similar to Monza in speed, Reims was a fast, triangular shaped track which was perfect for slip streaming. The three leaders swapped positions regularly until Bonnier too pulled off with a blown engine, leaving the American and Italian to fight for their respective maiden win. Going into the final corner, Gurney swept by into the lead, but Baghetti managed to stay right on the Porsche’s tail. Just meters before the finish, Giancarlo used the tow to slip past, taking the victory by one tenth of a second.

For 1962, Baghetti was promoted to factory team driver behind new World Champion Phil Hill, but the Italian stable was now outclassed by the British teams. Giancarlo would manage a 4th and 5th place finish over the season, but would never again come close to that first dream race. He would continue on in F1 through 1967 with a number of teams, never scoring another point. 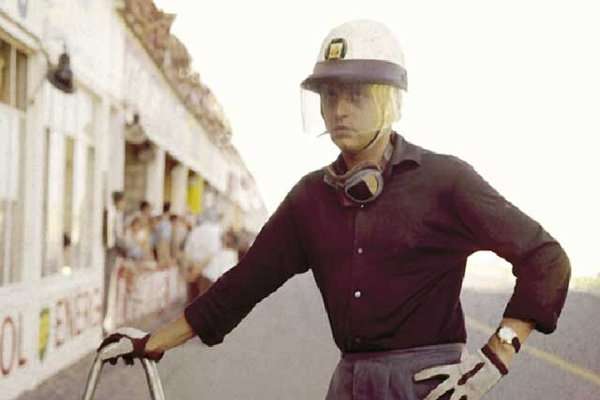 Upon retiring from racing, Baghetti’s life must have become unbearable. The Italian moved into journalism and, rather unfortunately, the best job he could get was as a photographer for Playboy. Even if he was not in fact the Messiah, Giancarlo Baghetti truly led a blessed life!

Race Report: Ocon wins Hungarian…
9 hours ago by Fred
Nice to see Haas in the points if only briefly ...