As I got to spend a few weeks in Melbourne including over grand prix weekend, I thought I would go and check out Liberty Media’s organised F1 season launch event in central Melbourne’s Federation Square this evening. 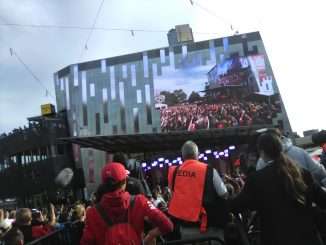 The event was basically two parts, one part was DJ music and the other part was short driver introductions led by Mark Webber.

The event saw all ten teams, all the drivers and team managers present on the stage throughout the proceedings.

Tonights event was free, it was designed to basically set things going for the weekend. All the teams and drivers arrived via riverboat down the Yarra River and walked up the stairs into Federation square to a few thousand F1 fans, awaiting them.

The atmosphere at the event was friendly and enjoyable with louder cheers as you’d expect for Ricciardo, Kubica and Ferrari. 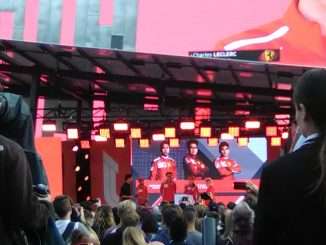 Sean Bratches, Ross Brawn and various Melbourne politicians and the mayor were present. I enjoyed the driver introductions but wish Liberty had done a tiny bit more in terms of what else was happening. They had some DJs and video footage of F1 playing but that was basically it other than the driver intros. A few static cars and a bit more to build  excitement would have been nice additions.

That said, this as reminded by the various speeches was a new thing for F1, at least in modern times and hopefully they can build upon it next year because thousands turned out this year for it and at the end of the day, it was free to attend giving something back to Melbourne.

They are seemingly showing the Netflix series on big screens in the city centre over the weekend, which was a bit baffling why that wasn’t tonight but hey, I had a nice time and set things up nicely for the event this weekend.

I also took a wonder around Albert Park a few weeks ago during construction of the circuit, it’s rather impressive how it evolves from public roads to become the circuit we all know and love in a relatively short timeframe.

Anyway I can’t wait to get down to Albert Park in the morning and see Supercars and Australian GT on track before F1 join the action on Friday, will report back but for now goodnight from Melbourne.

G’day Tom. Hope your enjoying your travels around our country. Thanks for sharing.
Keep it up.

Just remember, if its native to Australia, no matter how cute, don’t pat it. (girls excluded, you can pat them, but get permission first ’cause they will kick you in the balls) (or boys if your that way )

Hey Tom,
I was at the launch as well. I agree, it was OKish. Perhaps next year it will be better. I will be at the race too.
Can I suggest that during FP you have a walk around, you can get real close between turns 2 and 3 as they fly down the straight. Also, you get a real sense of the acceleration and grip as they go from turn 4 and accelerate through turn 5. Turns 9 and 10 are pretty awesome to watch at, as well.

Hope you fun at the track.

I watched the event on TV, and wondered who that lady host was, very feisty about owning the stage, Mark Webber couldn’t even start to say something, anything, should have been better rehearsed