What the drivers said between Austin and Brazil:

This was how Mark Webber summed up his first race in Austin:

@AussieGrit: Good start, then good clean fight with Lewis(who was quick), then loads of alarms for a few laps, then bang. Now off for burger.

@JeanEricVergne: By the way I nearly get killed yesterday by this monstrous bull or cow, don’t even know how to call it! pic.twitter.com/FqvxaX5s 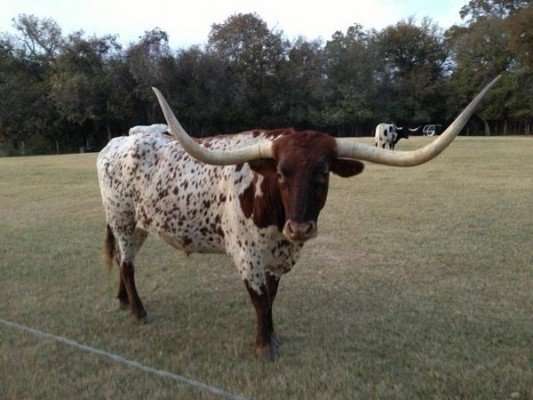 The world was watching Fernando Alonso in Brazil last weekend: 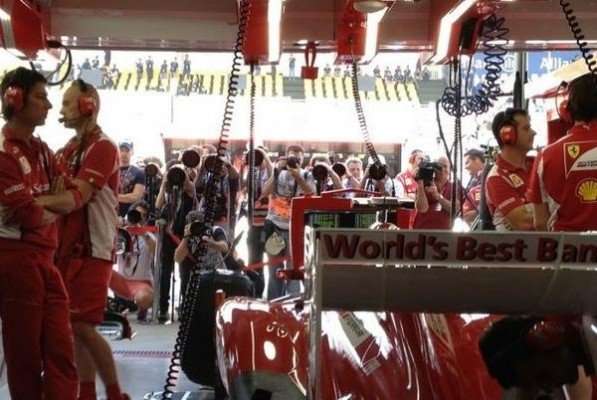 This is what Jenson Button had to say after the final qualifying session of the year:

@JensonButton: What an exciting Quali session here in Interlagos, just pipped by Lewis! Congrats to the whole team. Great to end the year as we started ;)

You know it’s been a long season when the teams start planning Christmas music in the garage:

@nico_rosberg: very funny normally the mechanics have heavy metal music in the garage. At the Moment there are pre race Christmas songs….

Alonso said this before the race:

@alo_oficial: For some reason we are fighting the world championship that logic would say was impossible. Enjoy today and whatever happens.. Thank you all

And here’s what he said afterwards:

@alo_oficial: Under maximum pressure we have performed again above what anyone imagined.. ;) ! Proud of the work, the team and all of you..!!! 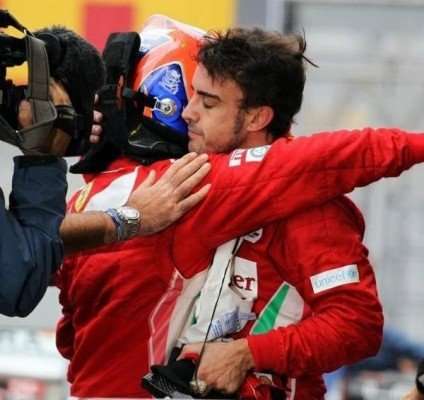 It was a good race for Jenson:

@JensonButton: BOOM! get in!! The most treacherous race I’ve competed In so feels extra special to finish on top! :) Great fight with Lewis at the start…

@JensonButton: Pity we couldn’t share the podium in our last race as team mates. I wish him all the best 4 the future. Lastly congrats to Seb 4 title 3!!

Here’s what Webber said to Button after the race:

@AussieGrit: Good drive Billy Button(@JensonButton). After F1 you could make even money as a weather forecaster. Always nail it. Top job.

@alo_oficial: Until February 2013 I will not have the possibility of getting back and drive the F1. I will miss it.. #forzaferrari pic.twitter.com/kFPmmnmb 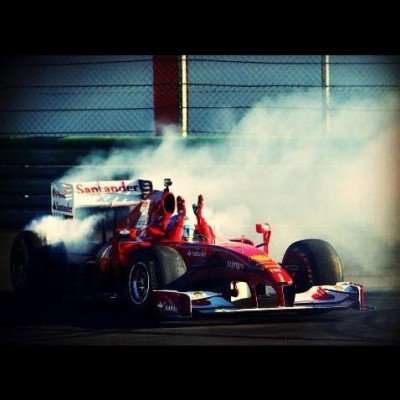 What the teams said between Austin and Brazil:

McLaren were proud to celebrate a win in Austin:

@TheFifthDriver: The trophies (and Pirelli hat) have arrived in the brand centre amongst a sea of Vodafone McLaren Mercedes Rocket Red! pic.twitter.com/ky6LoQca 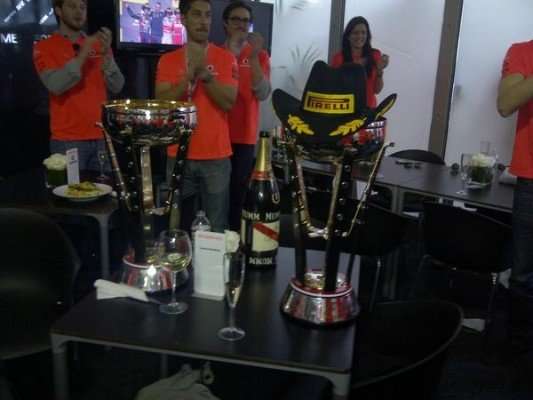 @InsideFerrari: 10.20 AM: where are our cars?!? Dove sono le nostre macchine?!? pic.twitter.com/SOaDdJVy 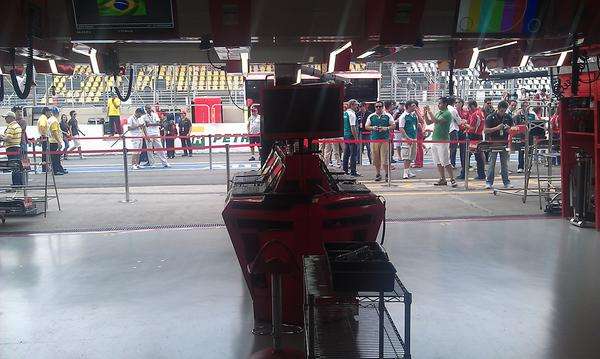 Lotus had an engine change ahead of quali to contend with:

@Lotus_F1Team: All hands on deck for the Iceman’s engine change; #MiniKimi gets straight in to help out #PitCrew360 #F1 #FullBrazilian pic.twitter.com/3kqzbkGw 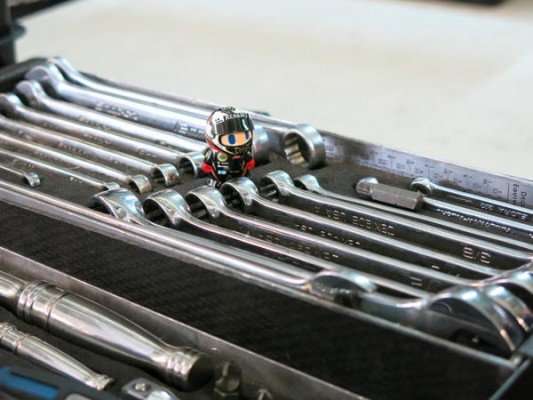 Ever wondered what Vettel listens to when he has his headphones on?

@redbullf1spy: Seb with the noise cancellers on. What’s he listening to under there? Motivation lessons, whale song or his usual ABBA Greatest Hits?

McLaren were getting all sentimental on race day:

@TheFifthDriver: The last time this sign will be placed on a Vodafone McLaren Mercedes breakfast table… #lewishamilton #f1 pic.twitter.com/PFt3dzTS 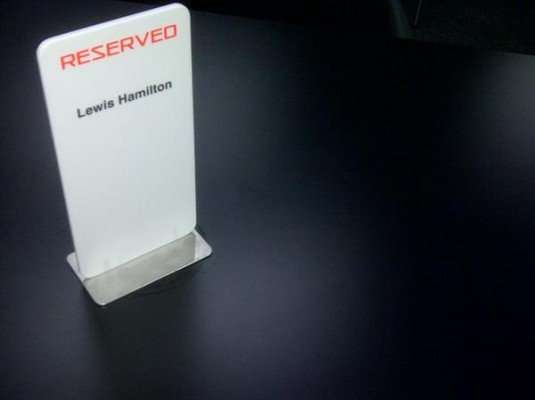 This from Red Bull’s spy ahead of the team’s biggest race of the season:

@redbullf1spy: What to do this afternoon? Game of Scrabble? Maybe a nap? Sundays, eh? Who knows, perhaps read the papers. What’s all that noise outside?

It was a bit too much for him during the race though:

@redbullf1spy: SPY is going to lie down for a while in a dark corner with a damp cloth on his head. Let him know what happens…

Down at Lotus, Mini Kimi was busy watching what his name-sake was doing on track: 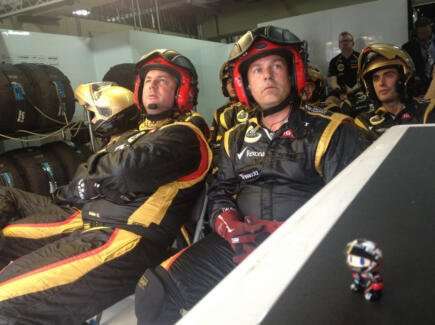 Here’s what they had to say about Kimi’s adventure off track:

@Lotus_F1Team: #Kimi harks back to his rally days for a moment off roading #FullBrazilian

After the race, they held a competition to give away Mini Kimi: 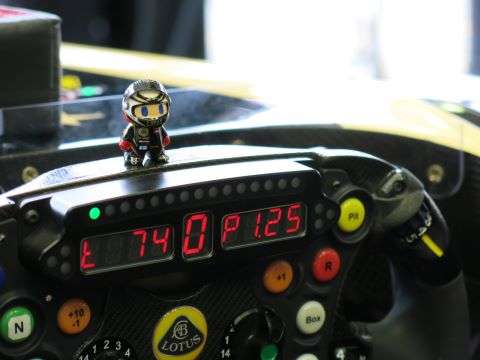 Red Bull said this after the triple world champion was crowned:

@redbullf1spy: For once sarcasm fails SPY. Sebastian Vettel is the 2012 Formula One World Champion. And that was a stunning race. Waaaaaaaaaaaaaaaaaaahhhh.

@redbullf1spy: It sounds like Seb’s crying. The big jessie.

He needs a holiday after all that excitement though:

Mercedes went out partying after the race:

@MercedesAMGF1: Well we say that but the previously funky Brazilian band has just broken into Backstreet Boys so now we’re not so sure! #DankeMichael

Lotus shared this after the race weekend: 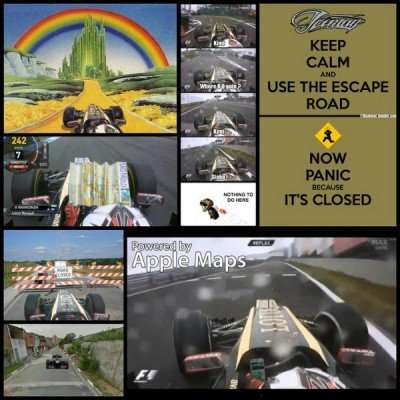 What the media said between Austin and Brazil:

Kate Walker had a song for Romain Grosjean:

@F1Kate: Song for Romain: I’m so dizzy, my car is spinning, like a whirlpool T19 never ends, and it’s you @clubforce making me spin…

Martin Brundle was on the same flight to Brazil as Paul di Resta and Jenson Button:

@MBrundleF1: Funny to see P Di Resta + J Button arrive at plane toilet door politely offering for each other to go first.Bet they won’t do that in turn 1

Sky were busy getting competitive with the BBC in the Brazil pitlane: 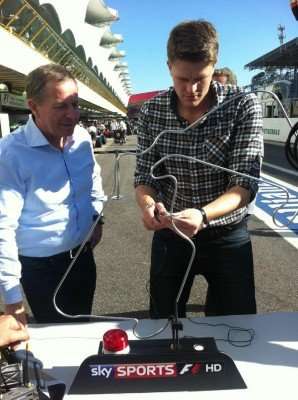 Jake Humphrey was sad to say goodbye to F1: 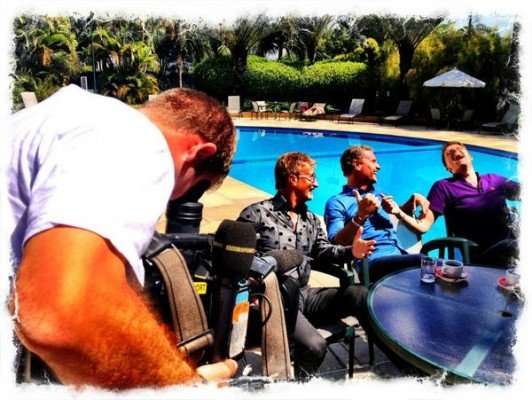 @therealdcf1: I wouldn’t normally name drop but I was thrilled to meet SC in Brazil pic.twitter.com/olD212gx 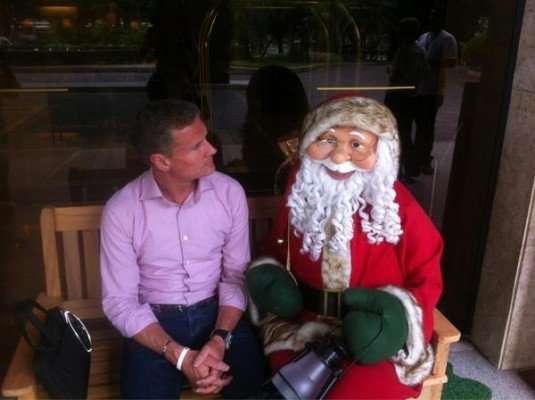 Brundle was ready for the race, even if the weather wasn’t:

Pablo Elizalde had this to say at the start of the race:

@EliGP: Vettel’s finger versus Alonso’s hat. There can only be one winner

The race was all too much for Kate Walker:

So was Christian Horner…

@F1Kate: One of these days I am going to put superglue on the RBR prat perch footrests. STOP JIGGLING, HORNER!

Here’s what the media had to say after the race:

@MBrundleF1: I’ve managed to draw breath now. What an incredible Grand Prix. What a season. Congrats to everybody involved not least Seb Vettel.

@EliGP: Raikkonen says he knew where he was going, but they had closed the gate he had used in 2001. “Next year I’ll make sure it’s open again.”

@EliGP: Day, weekend and season over. I will go collapse now. Thanks for the company; it warms my heart. Back tomorrow

@AdamHayNicholls: Getting some sleep after the Red Bull party was a big mistake – woke up just as my flight was taking off! BUGGER

That’s it for F1 Timeline for this season. Join me again very soon for more from the teams, drivers and media during the winter break.

Previous article
Ferrari: Ecclestone is old, F1’s a ‘joke’
Next article
Senna is hoping to stay in F1