With F1 on its summer break, you’d have thought Twitter would have gone a bit quiet. In some ways it has, but in others, with the Olympics beginning, there’s still been some talk from the teams, drivers and media. So here’s what the F1 world has been saying this week…

Following last Sunday’s race in Hungary, the drivers were in reflection mode and talking holiday:

@H_Kovalainen: Holiday time now, bit of golf planned next few weeks, got event in Poland next weekend and then one in Finland after…

@alo_oficial: Start the holiday time for many… Well deserved !!;)) I still have some work to do in Italy this week.. ;)! #TeamSpirit

@kamui_kobayashi: So cold @ Paris. Thank you for all support. Will boost at spa after difficult week at Hungary…. Have a good holiday!

Heikki Kovalainen was back home and doing a bit of gardening:

@H_Kovalainen: Cutting the grass today, left it a bit long before Hungary and now its seriously long….

Fernando Alonso is busy training for another ‘race’. Does he not know F1 is on holiday?

@alo_oficial: Some bike training right now…! In a few days I have a “small race” and I have to arrive in good condition..;)) ! I’ll keep you update..;)

Nico Rosberg went to a party on Monday night: 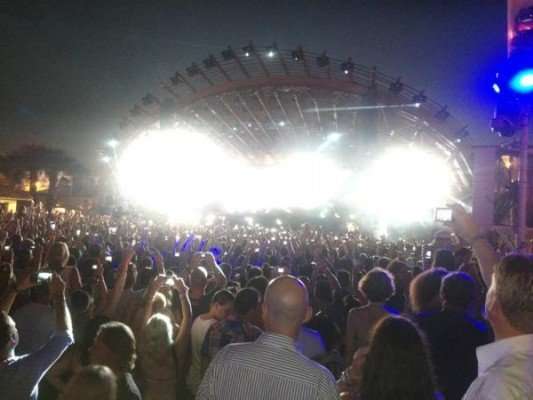 Jenson Button was in the Philippines. He wanted advice on some local dishes to try:

@JensonButton: I’m not sure fish and chips is a local dish here in the Philippines!! Gonna give Lechon a go I think!

Daniel Ricciardo had a day off on Tuesday, but was looking forward to heading to Imola on Wednesday:

@danielricciardo: Having a nice day out in england & not letting the weather get the best of me. off to Italy tomorrow for some filming days at famous Imola!

While in the Philippines, JB was watching the Olympics:

@JensonButton: Legendary performance by our boys in the cycling TT. GOLD 4 Wiggins & Bronze 4 Froome! 6 medals from GB athletes while sitting on their bum!

Lewis Hamilton was off on holiday on Thursday:

@LewisHamilton: Morning all! I’m on my holiday now with friends & @NicoleScherzy, beautiful weather & just chill. Now having breakfast b4 I hit waterskiing!

Alonso was back on the bike:

@alo_oficial: How’s it going? I keep training hard on the bicycle, 218km in last 2 days with some mates. I will post photos when I’ll arrive in hotel..;)

@alo_oficial: With @edo_osteo and friends training…! This afternoon we will rest and prepare the bikes for tomorrow…;)http://pic.twitter.com/VLY16Yt5 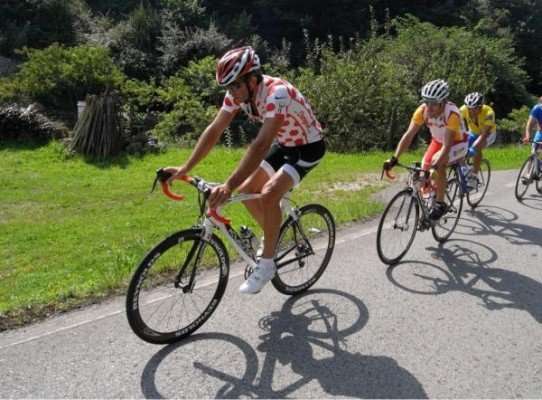 Mark Webber was watching the Olympics with a kangaroo:

@AussieGrit: Go the boxing Roo. What its all about, sport bringing the world together. #Olympics http://twitpic.com/aepkca 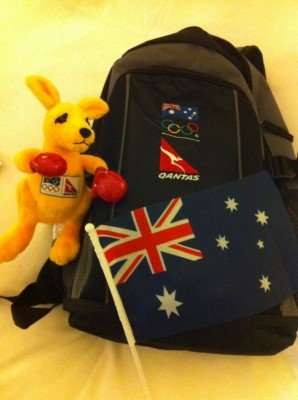 Nico Hulkenberg had a new comic on Friday:

@NicoHulkenberg: My latest Comic :) See you guys after the summer break!http://pic.twitter.com/CYMDtHyO 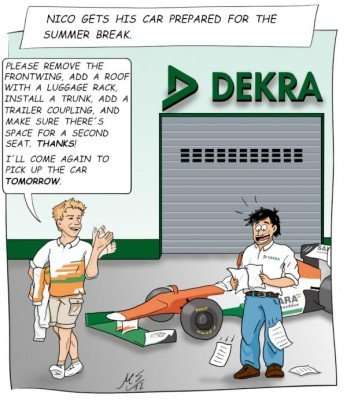 @danielricciardo: Test completed at Imola. What a great circuit. Didn’t realise it’s pretty much inside a village. Good fun. Now some feet up time

@H_Kovalainen: What a disaster in golf today, didn’t count all the shots in the end but probably 100+, just lost swing and feel. Course great tho! 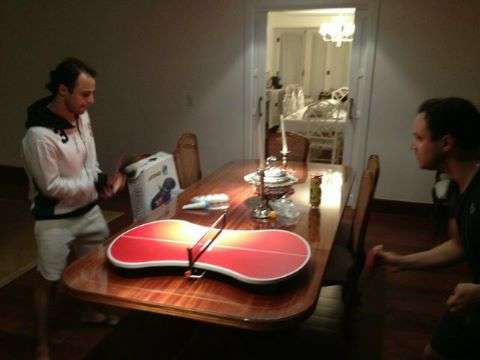 Webber was inspired by Jess Ennis and Mo Farah on Saturday night:

@AussieGrit: Have followed the jess and mo story for the last couple of years, and tonight that was bloody inspiring stuff. Class people and athletes.

@JensonButton: The best thing for me is that I qualified for the Ironman 70.3 World Championship!!! Very happy with that!

On Monday, Williams were already starting the countdown to Spa:

@WilliamsF1Team: Good morning all. Did you enjoy the race? Our countdown to the next one says 34 days until Belgium. That sounds a long time doesn’t it?!

So were Caterham, but they were also worried about their followers:

@MyCaterhamF1: It’s now more than a month until the next grand prix. Will you be alright?

Lotus shared a photo from Hungary that we didn’t get to see on TV: 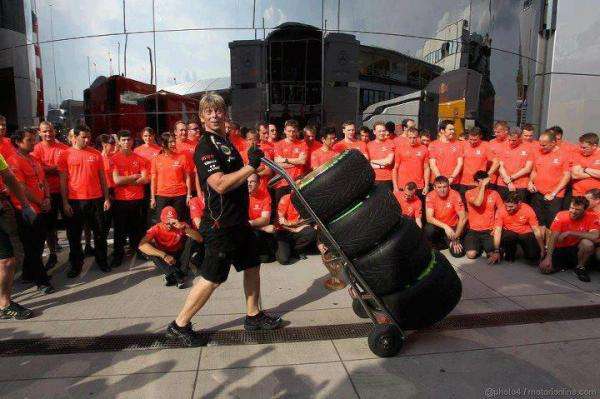 @Lotus_F1Team: @WilliamsF1Team @TheFifthDriver We haven’t stopped laughing since we saw it! Trust *ahem* this mechanic (no names mentioned) to do that!

Caterham also had a photo from Hungary: 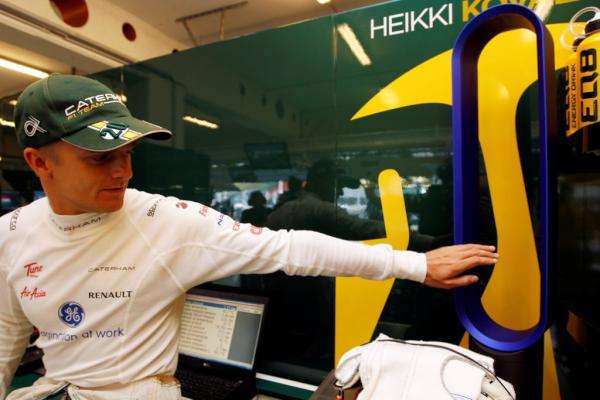 It’s safe to say, Lotus were busy working right up until the factory shut down:

@Lotus_F1Team: Factory shutdown begins at the end of this week, and the @Lotus_F1Team crew are working flat out right until the final whistle…#F1

@Lotus_F1Team: Top o’ the mornin’ to ya @Lotus_F1Team fans! It’s raining for a change; luckily our Twitter feed has full wets on; we’ll plough through! #F1

Red Bull were in Denmark on Friday:

@redbullracing: Well, what else would you have in your window in Denmark?http://pic.twitter.com/VNKVnKiL 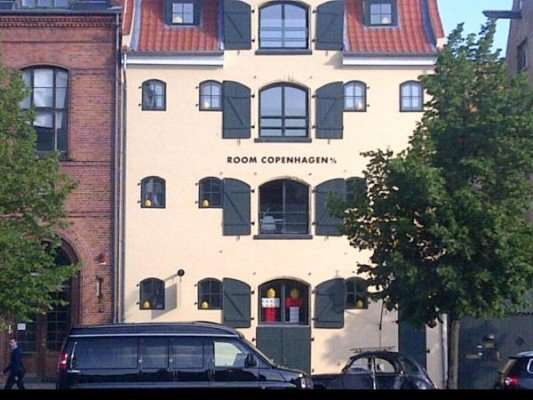 Lotus had a delivery: 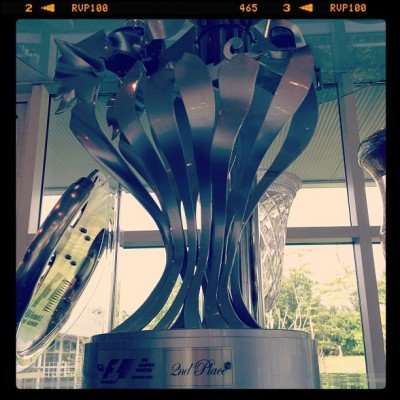 Sauber’s tweeter was late for the factory shutdown on Friday:

@OfficialSF1Team: Oh wow – I’m late. The lights in the factory have been switched off. I have to go. We will be back on 20th August.http://pic.twitter.com/dYkAh2u4 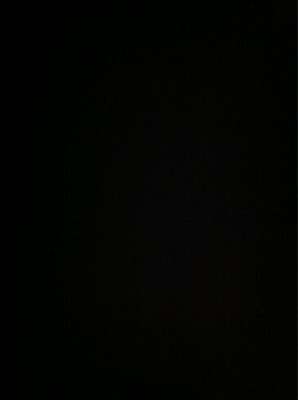 To pass time during their factory shutdown, Lotus would be making paper cars:

@Lotus_F1Team: Check out our attempt at the @Lotus_F1Team papercraft E20! She’s a beast don’t you think? #F1 http://yfrog.com/gy2cetexj 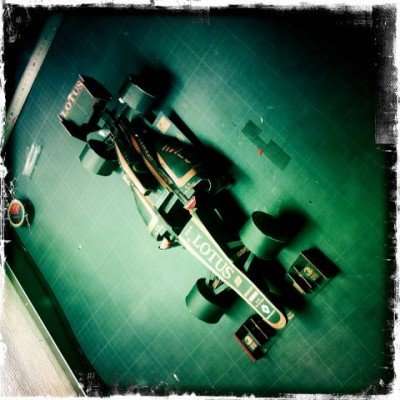 Red Bull were with David Coulthard wowing the crowds in Denmark: 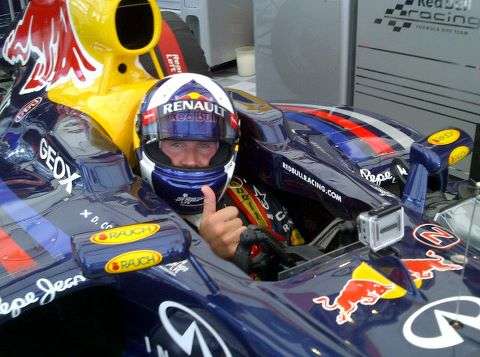 @adamcooperf1: Mega night out at Symbol in Budapest last night with @AlguersuariJA and @SakonYamamoto DJ’ing, and @GvanderGarde joining in too

Will Buxton reflected on interviewing the GP2 top 3 on the podium in Hungary:

@willbuxton: Still reflecting on an absolute career highlight in Budapest.http://instagr.am/p/NswzDzGErP/ 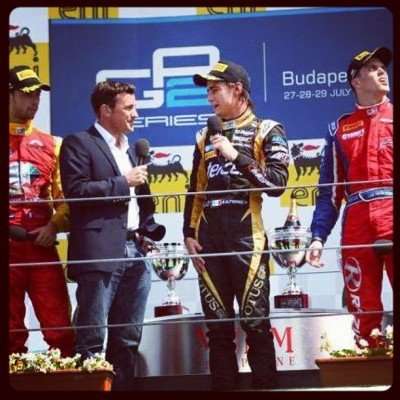 @AllanMcNish: Bahrain is 43 degrees C, not felt that sort of temperature since I was a boy in the white hot heat of Dumfries……oh that was Fahrenheit!

David Coulthard was in the mountains:

@therealdcf1: Mountain Air, breath it in, I can hear Cow bells, that explains the aroma http://pic.twitter.com/cWtCSf6R 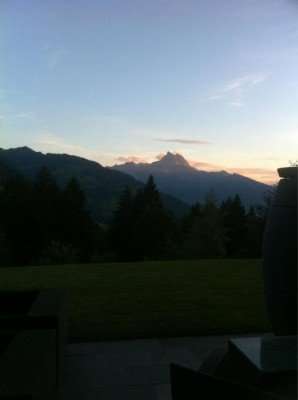 5LiveF1 completed his F1 road trip by driving back to the UK from Hungary: 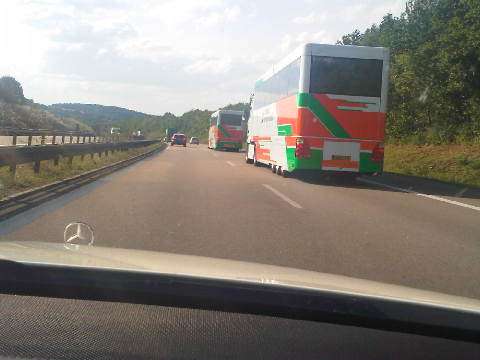 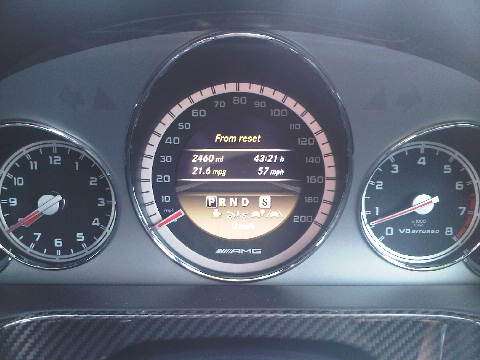 Johnny Herbert was watching the Olympics on Tuesday:

@johnnyherbertf1: After a great win for Lewis on Sunday, it is a great time to support our British Sports men and women at the Olympics.

Natalie Pinkham shared some photos from her wedding: 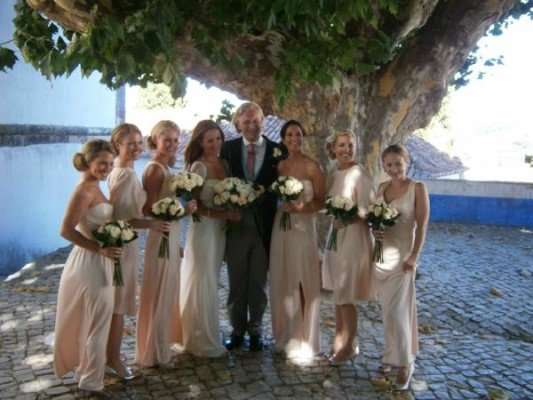 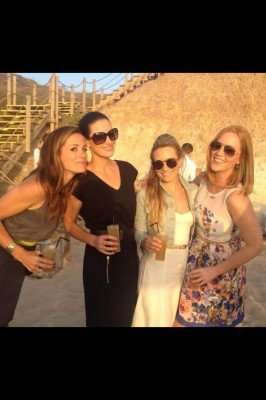 Martin Brundle was watching the Olympics:

@NobleF1: Well, @bradwiggins has a lot to answer for. Inspired me to cycle 30 miles in to work this morning. What a glorious way to start the day

Will Buxton’s daughter was inspired by the Olympic swimmers:

@willbuxton: London 2012 designed to inspire next generation. Had the swimming on TV & my 2 year old asked if we could go to the pool tomorrow. Awesome.

Ted Kravitz was ready for The F1 Show on Friday: 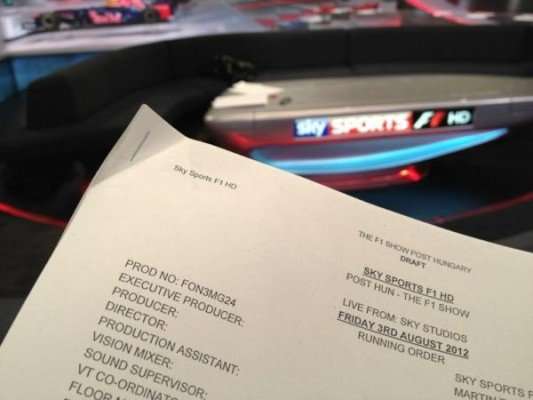 Georgie Thompson was at the Olympic Stadium on Saturday night: 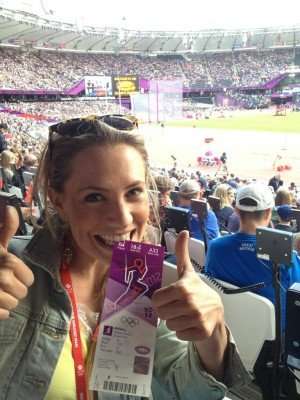 @NataliePinkham: ‘5 laps to go, and we are now in sprinting territory’ ?! these wee fellas really are superhuman

@NataliePinkham: Just astonishing! AMAZING MO!! Mama Pinky and I are in tears!

So was Will Buxton:

@willbuxton: Bet they’re glad they didn’t put a roof on that stadium. Would just have been blown off. Wow. What a race!!! Farah, epic.

@willbuxton: I guess the book on BBC SPOTY is back open then?

Conor Daly was happy to be back home in America:

SantanderGP noticed that there’s a Twitter battle emerging between Hamilton and Alonso:

@SantanderGP: @LewisHamilton has been so active in twitter lately that @alo_oficial is now more committed than ever. They are racers! http://pic.twitter.com/L60FEtIf 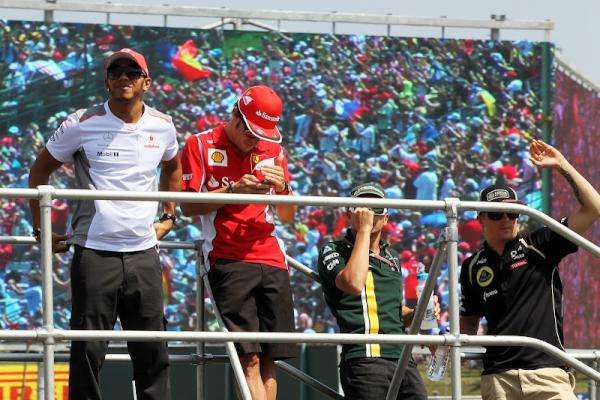 Rubens Barrichello found a letter from his son on Friday: 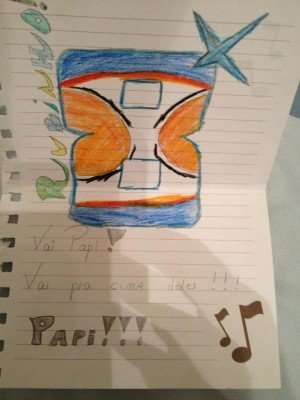 Conor Daly shared a photo of a cow made of butter: 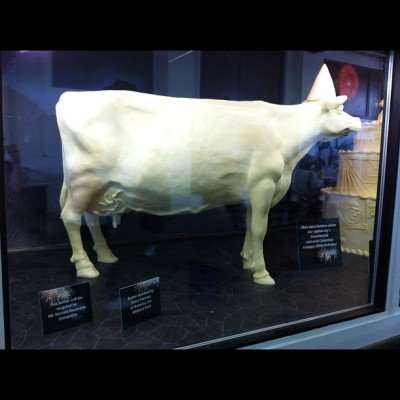 Catherine Hyde was playing golf with boyfriend Heikki on Saturday:

@KataHyde: I think my game on the par 3 course was better than @H_Kovalainen played his game although my sunburn is worse ;)

@KataHyde: Fun time this week in Poland, thanks to Sand Valley Golf and Country Club! http://pic.twitter.com/yGKxiBNu 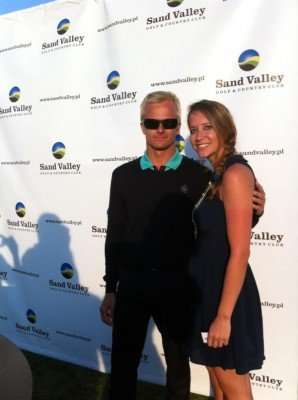 And finally, Dave Robson was inspired by the Olympics:

@DaveRobsonF1: Wow. What a day of olympics. Phenomenal lesson in dealing with pressure and expectation by Jessica Ennis. Amazing. Incredible. Inspiring.

That’s it for this week’s F1 Timeline. Join me again next weekend for more from the teams, drivers and media in the world of F1 social media.