With this week’s big news, Twitter has been a busy place with lots of comment on Lewis Hamilton’s move to Mercedes and Sergio Perez’s step up to McLaren. Notably, there have been fewer Twitpics as the teams, drivers and media have been sticking to comment. So here’s what they’ve been saying…

On Monday, Heikki Kovalainen was still in Singapore, and you guessed it, he was playing golf:

@H_Kovalainen: Playing few holes of golf in Singapore this afternoon, flying home tomorrow so time to see the city a bit more

Daniel Ricciardo had this to say following his points finish at Marina Bay:

@danielricciardo: Thanks for all the messages, had a lot of fun out there last night. Enjoyed the battles I was in. Great to get more points. Lets keep going!

Jenson Button summed up how Singapore was for him:

Fernando Alonso was getting philosophical on Wednesday:

@alo_oficial: Only a warrior can handle the road to become unbeatable. His life is a challenge, and challenges are not good or bad, are simply challenges.

He was also eating Italian food:

@alo_oficial: Always surprising how easy you find an Italian restaurant anywhere in the world..;)! Happy day to all..! pic.twitter.com/6ZJOgueS 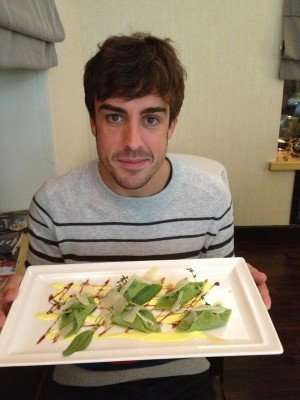 Kovalainen had no energy following a long flight home:

@H_Kovalainen: Back home, no energy, feels like jet lag but just gotta go for a run and get going again. Raining so should wake me up!

On Thursday he had an interesting choice of pizza for dinner:

Here’s what the drivers had to say about Friday’s big news:

@nico_rosberg: Very cool that lewis will be my new teamate! Gonna be another great challenge!

@SChecoPerez: How you like the news:) ? I want to thank God for such an opportunity , McLaren is the best place to be in the world of f1!!

@SChecoPerez: I want to thank a lot @OfficialSF1Team for the chance that they give to me to become an f1 driver !

Let’s hope he means ‘exciting’ rather than ‘exiting’!

Meanwhile, Lewis Hamilton hasn’t been on Twitter since before the news broke…

Alonso is inviting you to join him on Instagram for the Japanese GP next weekend:

@alo_oficial: Because a picture is worth more than 140 characters, this week in Japan I invite you to follow me on ” Instagram ( alo_oficial ) ” Enjoy!! 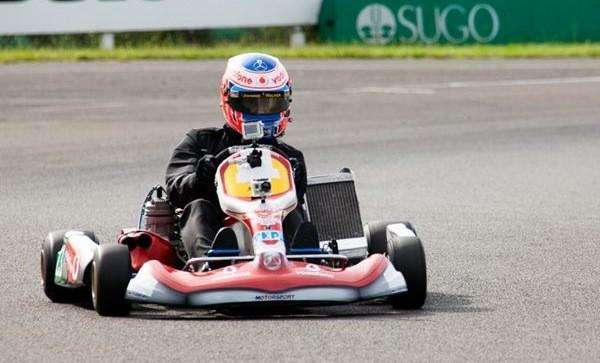 Kovalainen flew to Japan yesterday, but only after BA found the captain:

@H_Kovalainen: Feeling like getting a cold, better scare it off in the gym quickly before flying to Japan!

@H_Kovalainen: Flying to Tokyo with BA, and the flight is…. Delayed of course! Captain stuck in traffic…

@H_Kovalainen: Wow, after 30min of unknown we now know we will be delayed until 14.45! I guess they’ve found the missing captain!

It looks like it could be wet in Suzuka next weekend, if the current weather in Tokyo is anything to go by: 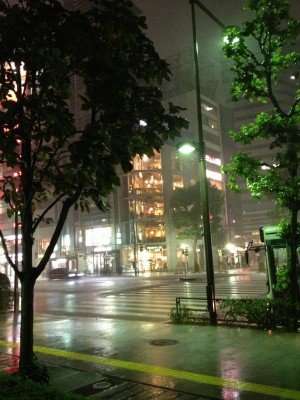 The teams have actually been quite quiet this week, but Lotus have won the award for ‘random tweet of the week’:

@Lotus_F1Team: Don’t expect to get any work done today though… #WorldPiggyDay is a full time commitment! Not cool @BadPiggies… not cool…@AngryBirds

Sauber had this to say about Sergio Perez:

@OfficialSF1Team: After two years @SChecoPerez will change to #McLaren next season. We will announce our driver line-up for 2012 in due course. #F1

Lotus were trying to get their heads around it all:

@Lotus_F1Team: Morning everyone! It’s Friday!! Any plans for the weekend? Other than trying to get your head round the #F1 driver market of course…

After the race, Lee McKenzie was watching the crew dismantle the track: 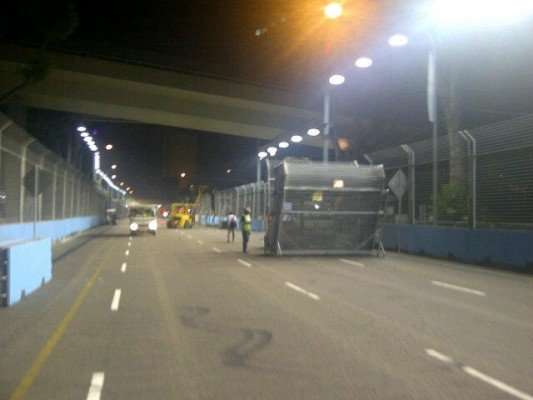 The Sky team were figuring out how to stay awake:

@CroftyF1: So @NataliePinkham thinks we need to keep to UK time tonight, so it’s off to @AmberLoungeLtd we go. By far the best way to enjoy a GP night

Jake Humphrey was enjoying a night out with Simon Lazenby: 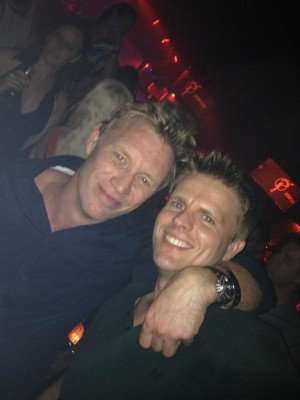 Jennie Gow got back to the UK in one piece after she fainted on the way to Singapore:

@JennieGow: Hurrah! Managed not to faint for entire journey from Singapore – Dubai & despite offers of crash helmets from 2 drivers, I didnt need them;)

@NataliePinkham: It seems @katyperry has a new team of bodyguards ….the #skyf1 camera boys! pic.twitter.com/YuoLPQOI 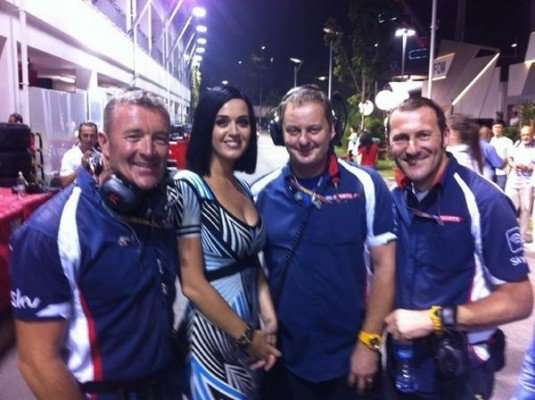 @CroftyF1: On our flight to Singapore we saw The Proclaimers, on our way home we’re travelling with Bananarama, Now That’s I Call In Flight 80’s Pop :)

Jake Humphrey was also in the lounge with Bananarama:

@mrjakehumphrey: Advice needed…in the same departure lounge as Banarama(ask your parents if you’re 20 or younger!!), how do I keep my cool…?

Simon Lazenby didn’t want to talk to Natalie Pinkham on the flight home: 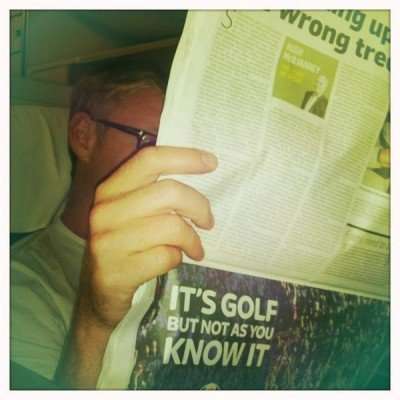 Will Buxton visited his parents on his way back from the airport:

@willbuxton: I’ve brought dinner and wine. Mum’s going to wash and iron all my stinky clothes from Singapore. I call that a fair deal.

A cancelled flight meant a cancelled meeting at McLaren for Lee McKenzie:

@LeeMcKenzieF1: Maybe not mid air! Flight cancelled! Stuck in Singapore. There goes my 11am meeting at McLaren tomorrow!

This was Timo Glock’s response:

@realTimoGlock: @LeeMcKenzieF1 oh shit hope you get a flight soon!

DC was home though, and he was doing bath time:

@therealdcf1: Back home in mc with the missis and doing bath time ( with our son for clarity) getting wetter than being in the car!

Wednesday was supposed to be announcement day:

@mrjakehumphrey: So, EJ said today was the day Schumacher’s future is revealed…has he ever been wrong before..?

On Thursday morning, Crofty’s son tweeted for him:

@CroftyF1: So it seems that my 3 year old son has just tweeted his morning score on Temple Run. He was very proud of his efforts as is his Dad :)))

Natalie Pinkham still had her cold:

@NataliePinkham: As croaky as Kermit today

This was the media’s reaction to Friday’s big news:

@NobleF1: To all those asking, I’m not asleep nor travelling today. But if I was flying, let’s just say I would be on my way to Stuttgart…

@willbuxton: Well spank my ass and call me Judy. Perez confirmed at McLaren. Genuinely didn’t see that one coming.

@MBrundleF1: Perez confirmed at McLaren and courtesy call from Merc media to say news in about an hour. The pack is shuffled, drivers can now deal

@MBrundleF1: Perez is a young Ferrari driver graduate. Will be amazed if McLaren has taken him and Ferrari still have a big piece of elastic attached

@MBrundleF1: key person at McLaren in Singapore seemed positive Lewis was staying. There are many players in the HAM decision I suspect. It’s good for F1

@MBrundleF1: Lewis will now have to be excommunicated from any McLaren developments and new knowledge for the next six races.The enemy within. Happy days

@mrjakehumphrey: I’ll get the lottery numbers from EJ and tweet them later…

@F1Kate: If the speed of the McLaren and Mercedes press releases is indicative of the cars’ future pace, Lewis has definitely made the wrong move.

@willbuxton: HAM’s move is good news for the boys at Brackley. Big talk Merc would have pulled the plug without a big name.

@JRobertsF1: So Lewis leaves the team he’s been with since he was 12 and ousts Michael Schumacher… Quite a monumental day in Formula 1!

The news meant Kate Walker would make her TV debut:

@F1Kate: So the BBC have asked me to go on the 24h news channel this afternoon to discuss Hamilton leaving McLaren. Eek! #nervous

The rumour got everyone talking and even made my local radio station’s news bulletin, but I can confirm (because I checked on several occasions), Jenson never even followed Lewis in the first place…

@NobleF1: Some reckon that Button never actually followed Lewis on twitter in the first place… Either way, still interesting…

@NobleF1: Mind you, Jenson would get to see McLaren telemetry data long before it was put on Twitter anyway…

Ted Kravitz was at the Mercedes factory in Brackley to speak to Ross Brawn:

@tedkravitz: Is Lewis Hamilton’s move here the right one? Reaction and analysis on The F1 Show, tonight 8pm #skyf1 pic.twitter.com/FsVYIG1e 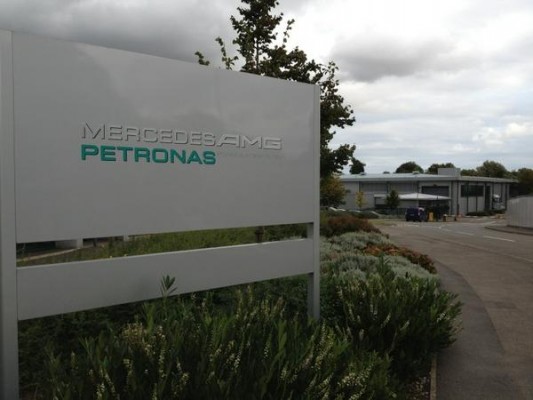 @F1Kate: I WAS ON TV!!! And I didn’t say anything stupid, fall over, or break anything. Phew!

The big announcement forced Sky to rip up their scripts for The F1 Show and start again:

@OfficiallyGT: We have ripped up the running order, thrown away the scripts and almost ready for a timely F1 show. All the LH reaction here. Don’t miss it!

@mrjakehumphrey: Also, having recently made a big decision of my own, LH’s decision fits my Moto – ‘never sit in the comfy chair’. Hope it works out for him.

And finally, James Allen’s son has been playing the new F1 game this morning:

@Jamesallenonf1: #f1 V funny moment with my 8yr old, came in to find he was on new F1 2012 game, being Grosjean.. doing spectacular startline crashes!

Having the final word in this week’s F1 Timeline is Rubens Barrichello, who tweeted this about this week’s news:

@rubarrichello: @SChecoPerez at Mclaren took me by surprise. @LewisHamilton I could have expected. Happy for both though

That’s it for this week. I’ll see you again next week for more from the teams, drivers and media in Japan…