It’s been a quiet week in the F1 Twitter world. After a busy week in Abu Dhabi last week, the teams, drivers and media have been more subdued this week. But here’s the best of what they have been saying…

Fernando Alonso was straight back to work on Monday, prepping for the final two races in the simulator: 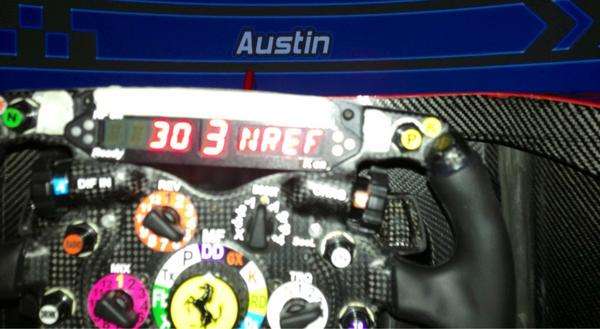 Jenson Button had a message for Kimi Raikkonen on Tuesday:

Daniel Ricciardo has been hanging out with his younger cousin this week:

@danielricciardo: My lil cousin preparing to take over my seat in a few years time. Watch out! pic.twitter.com/d7W8x9sR 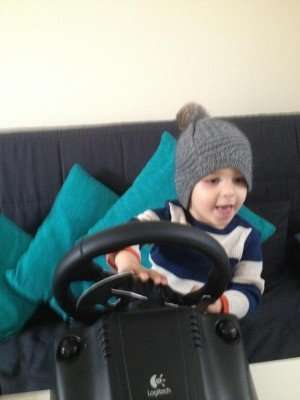 @danielricciardo: Told you he wants to take over in a few years time! He didn’t want to leave it! #littleracerboy pic.twitter.com/Yz2WCFto 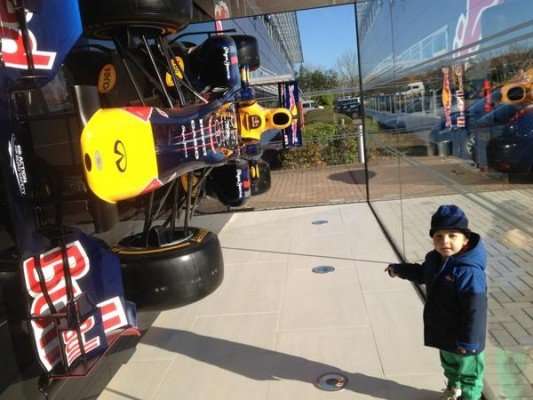 Heikki Kovalainen’s girlfriend went away this weekend, and he’s been left to do the washing:

@H_Kovalainen: Been home alone this weekend, washed some of my clothes and maybe misjudged the temperature with one of my tops…pic.twitter.com/junA0x0B 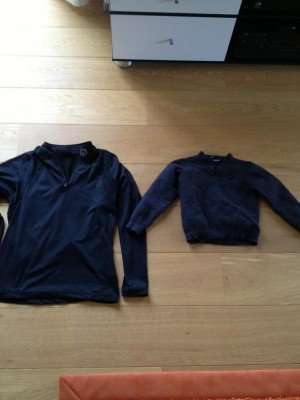 @KataHyde: @H_Kovalainen I really hope you haven’t washed anything of mine honey!

@KataHyde: @H_Kovalainen Last time I was away the dishwasher stopped working, this time you shrunk your jumper. Should I go away more or less??? ;)

Everyone has been talking about Kimi’s radio message this week: 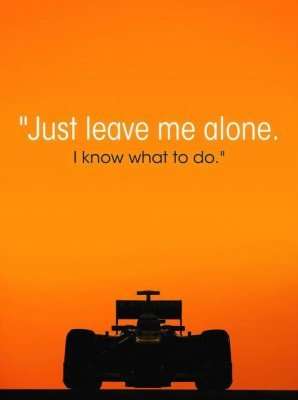 Mini Kimi was celebrating with his trophy:

@Lotus_F1Team: One of the photos we’re sure you’ve been waiting to see… #Kimi #LotusF1Team pic.twitter.com/zb901hLi 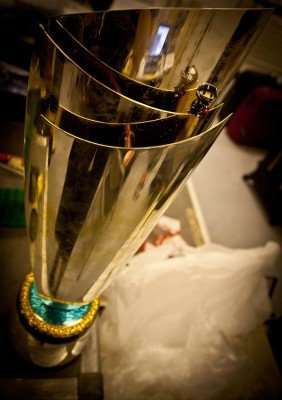 The team posted this cartoon on Monday: 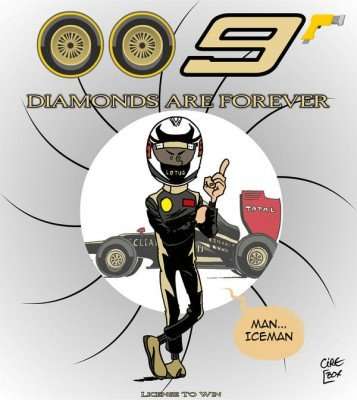 The teams have been busy in Abu Dhabi this week at the Young Driver Test:

@redbullracing: Peeping through the shutters on Day 1 of the Young Driver Test in Abu Dhabi with @a_felixcosta13 http://yfrog.com/oeajbuvj 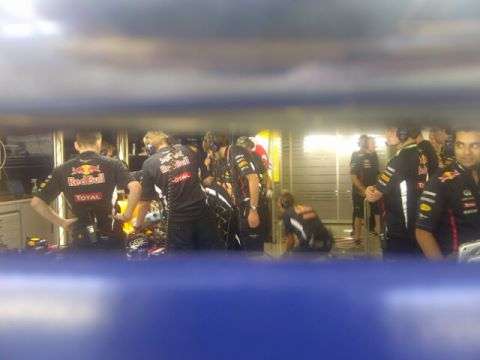 @MyCaterhamF1: More flow-vis going on the car for the next run. The pitlane’s beginning to look like The Hacienda in the early 90s….. 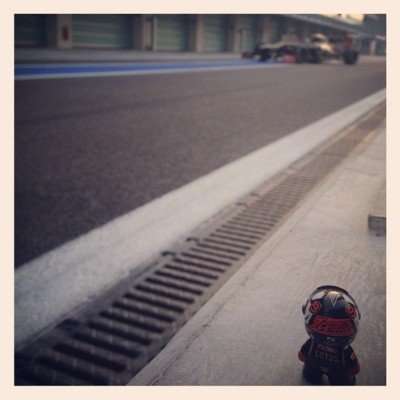 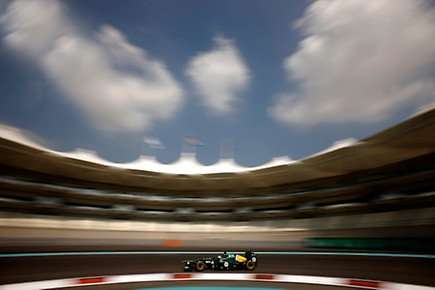 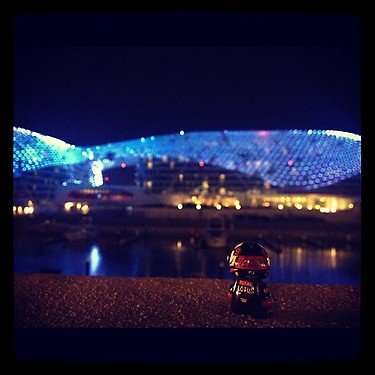 Lee McKenzie was back home and freezing cold on Tuesday:

@LeeMcKenzieF1: My friend seems to find my need to wrap up in Oxfordshire after Abu Dhabi amusing! She can laugh, I’m freezing! pic.twitter.com/kMCSzPVW 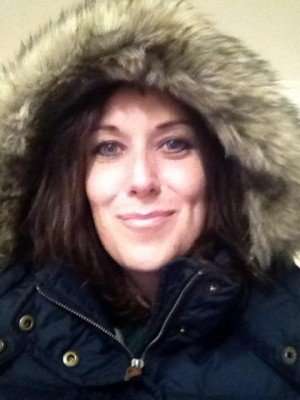 She had a meeting to attend on Wednesday:

@LeeMcKenzieF1: London today to chat last 2 F1 races. If Alonso or Vettel could send me their plans for next 2 gp’s then it would make the meeting easier!

Sky’s insider was at the Young Drivers Test: 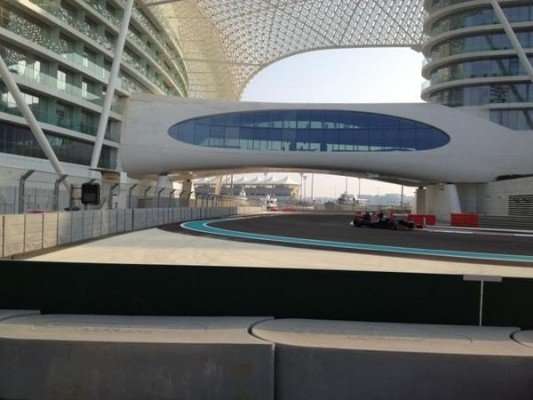 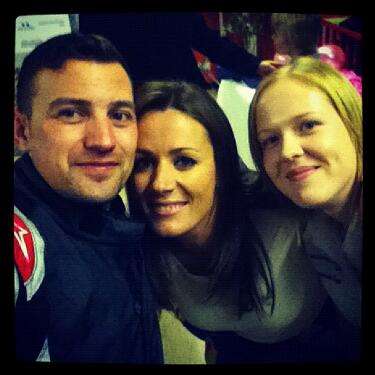 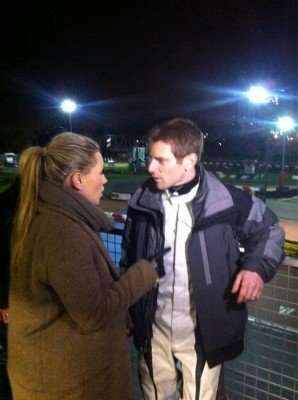 @CroftyF1: A @johnnyherbertf1 master class at Rye House tonight, he’s not lost it that’s for sure sadly his team mates left him to much to do to win :(

How many times can you use the words ‘looking forward’ in the same piece:

@EliGP: Maybe the FIA should warn teams about the use of ‘looking forward’ in their previews http://twitpic.com/bbpfun 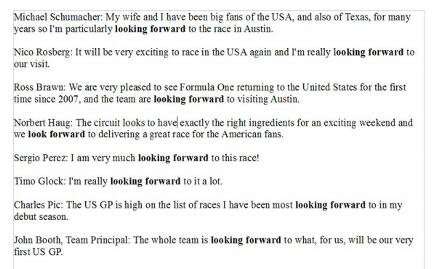 The media were discussing tarmac run off at turn one at Interlagos on Friday:

@mrjakehumphrey: Have they really tarmaced outside of T1 at Interlagos?!? What happened to being punished for driving off the track!! pic.twitter.com/nuVHBIUl

@5LiveF1: Re the run off debate, always been a fan of @antdavidson’s idea of crocodiles and sharks with lasers patrolling the run offs…

Georgie Thompson is ready for Austin:

@OfficiallyGT: Getting ready for The F1 Show and Texas hence the cowboy boots. Must get @tedkravitz and @antdavidson a pair! Yeeha! pic.twitter.com/ww39LP3b 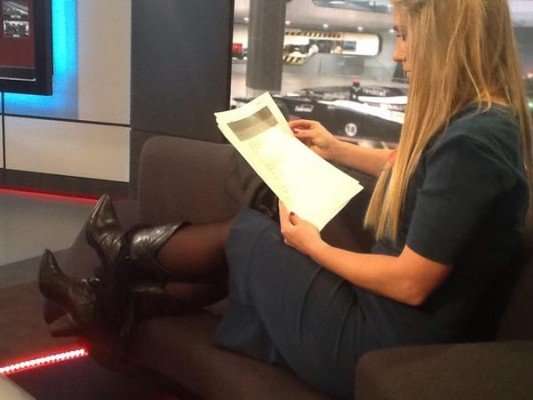 Finally, the Circuit of the Americas is ready for next weekend’s race:

@circuitamericas: They’re here! The F1 teams have started to arrive for the #USGP! Retweet if you’re ready for the race! pic.twitter.com/bgsrtiP8 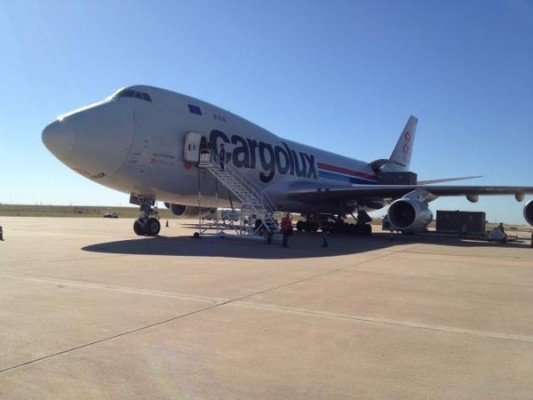 That’s it for this week. Join me again next week for more from the teams, drivers and media from Austin…