This week, the F1 world went Gangnam Style crazy as the sport made its way to Korea for round 16 of the 2012 championship. Despite what you may think of the dance, it gripped the teams, drivers and media, and it made its way into a few of their tweets this week. Another hot topic was Lewis Hamilton and his most recent Twitter shenanigans, so here’s what’s been tweeted this week…

Felipe Massa had a photo from his podium:

@JensonButton: 2.8k in the pool without a single man hug!! :) “@mikeycollier: 1 guess what me and @JensonButton are about to do! pic.twitter.com/5GCuVVAd” 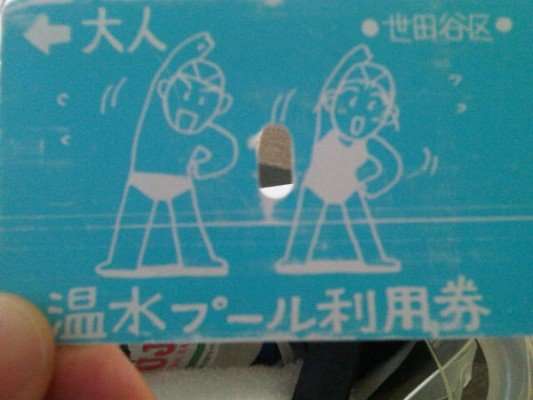 @AussieGrit: The Lightning strike is minutes away…

It turned out to be Usain Bolt: 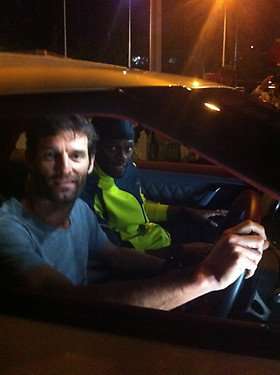 F1 is not glamorous you know:

@SChecoPerez: For those who think f1 is full of glamour ! We travel 4 hrs like this jaja! #happyfamily pic.twitter.com/dKSyebsd 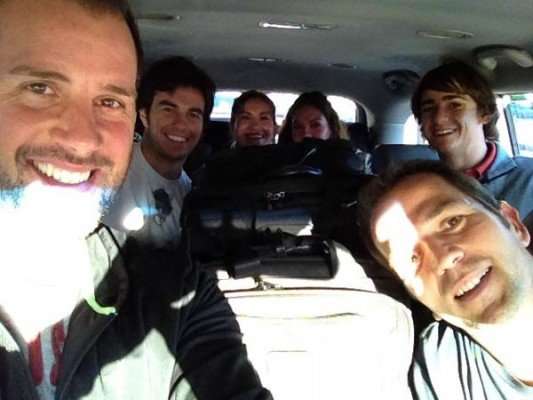 Jenson was tweeting about a space suit: 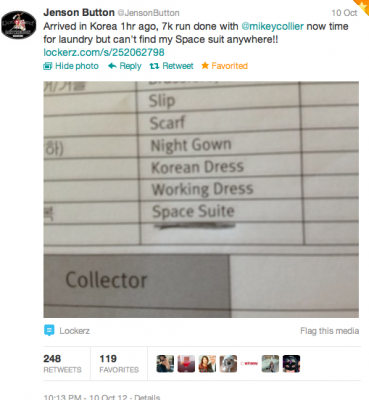 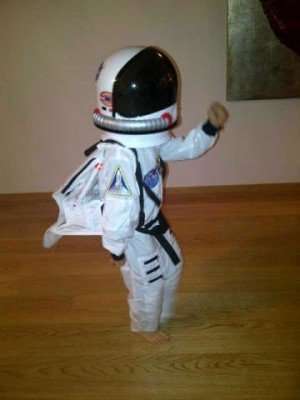 The drivers did some bonding in Korea: 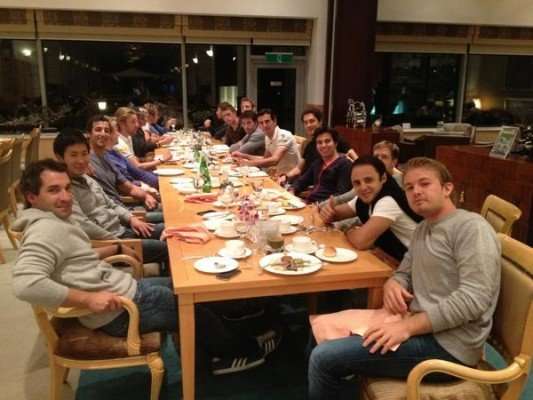 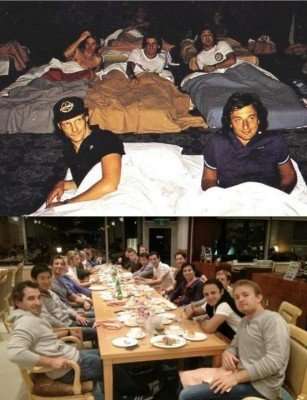 Here’s what JB had to say to Dave Robson about Korean food:

On Tuesday, it will be a year since Indycar lost Dan Wheldon – and Jenson tweeted this on Thursday: 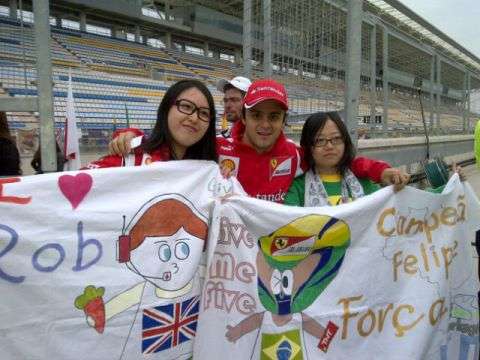 Here’s a photo from Alonso during Saturday’s fan signing: 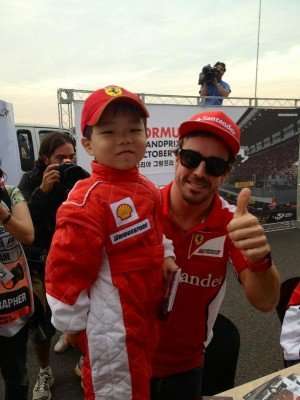 Here’s what the drivers said post-qualifying:

@realTimoGlock: Bit disappointed about my mistake in turn 10 otherwise could have been closer to the 2 green guys! Lets see what we can do tomorrow. 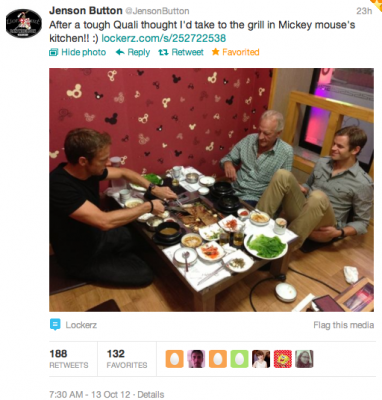 This is what Kamui Kobayashi said post-race:

@kamui_kobayashi: It was my misstake at start accident sorry for jenson and nice…. Also to my team…..

Caterham started off the Gangnam Style tweets on Monday:

Marussia stopped by to read your tweets in #F1Chat on Monday night (well, Tuesday morning Korean-time):

@Marussia_F1Team: While we were sleeping seems many of you were having a gd ole chinwag with #F1Chat @F1Chat. Interesting stuff! Having a read over breakfast

Red Bull’s spy has been seeing things this week:

@redbullf1spy: Hello Tokyo. Is that a Panda in a go-kart being chased by Mandrill or should I lay off the mushrooms at breakfast? pic.twitter.com/wetr8P7u 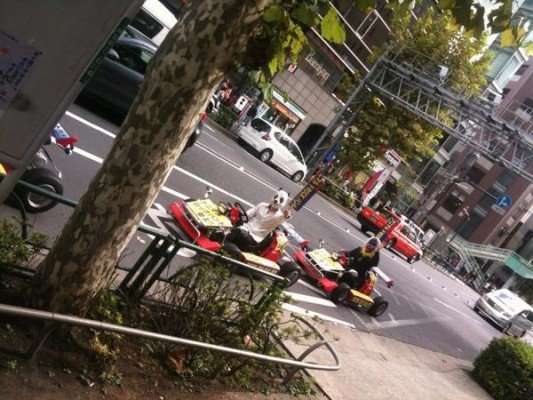 Mercedes shared a cool photo from Japan on Tuesday:

@MercedesAMGF1: One of the very cool fan outfits we spotted in #suzuka http://instagr.am/p/Qjn6KnKEBy/ 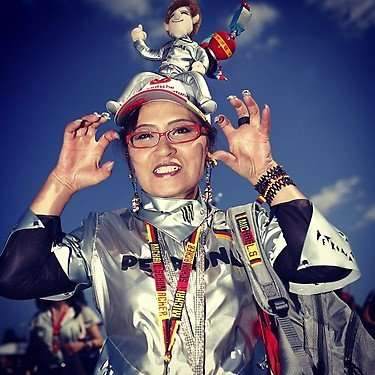 Lotus announced their hashtag. Looks like they took inspiration from Caterham:

@Lotus_F1Team: Ok, here we go! The @Lotus_F1Team #KoreanGP hashtag is… #YeongamStyle! We just couldn’t resist… get on your dancing shoes everyone! #F1

This sign has cropped up a few times this week:

@Lotus_F1Team: We’ve found our favourite sign of the week so far in an elevator; don’t lean on the doors… #F1 http://yfrog.com/nxf5ubpj 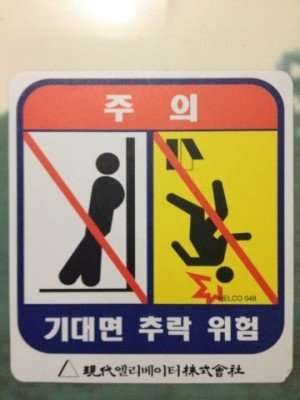 Williams had this on Gangnam Style:

@WilliamsF1Team: Looks like we might be doing the #GangnamStyle dance after all! @NataliePinkham is rounding up the troops! It will be on @SkySportsF1 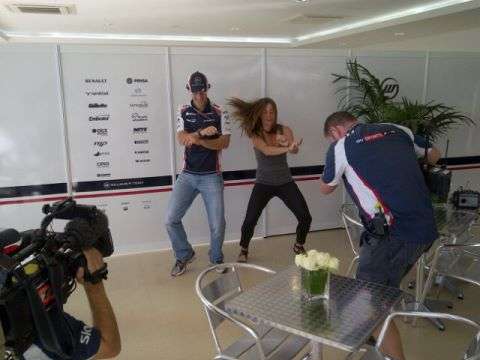 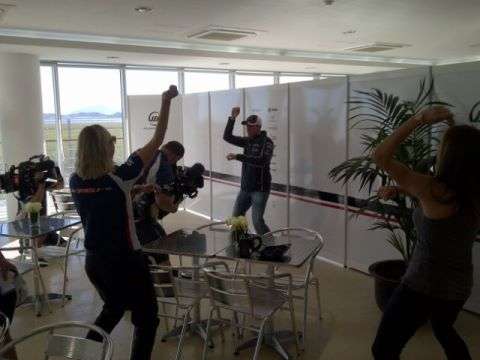 Even Nico Rosberg joined in: 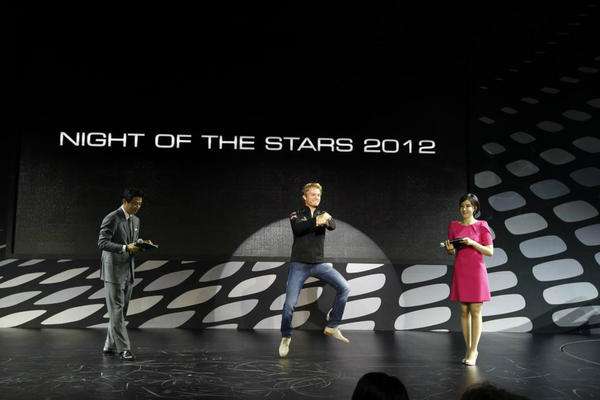 McLaren held a pitstop competition for the TV crews: 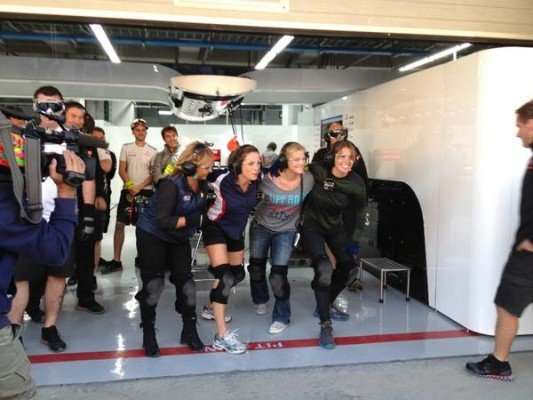 They posted a photo of their view on Thursday:

@TheFifthDriver: Pic from the back window of the McLaren engineers’ office in the Mokpo paddock. We really are in the middle of nowhere! pic.twitter.com/7paWmT6T 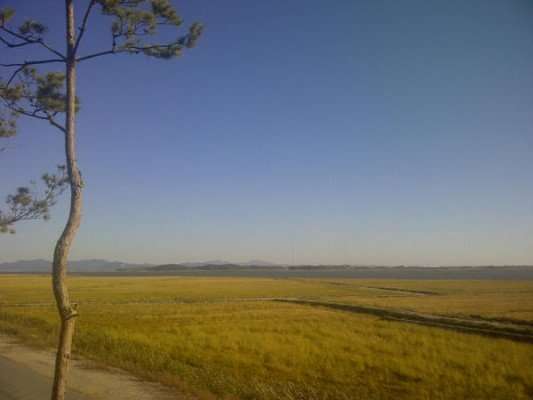 @InsideFerrari: In F1 everyone lives off certainties that are later proved wrong..The latest comes from Brazil and concerns @Felipe1Massa’s future…

@InsideFerrari: To those who think they know it all, we can only say is there’s nothing new under the sun…

Autograph from Kobayashi anyone? 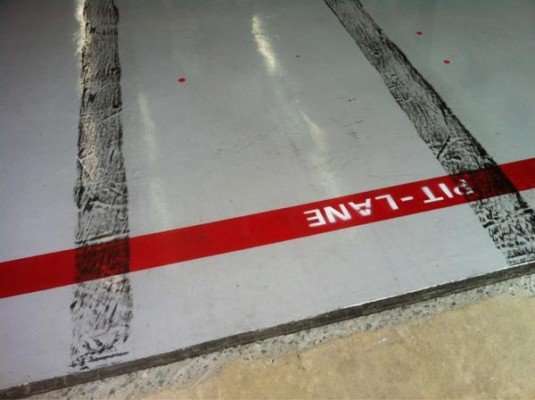 Here’s a panoramic from the McLaren garage on Friday:

Williams posted this of Maldonado before qualifying: 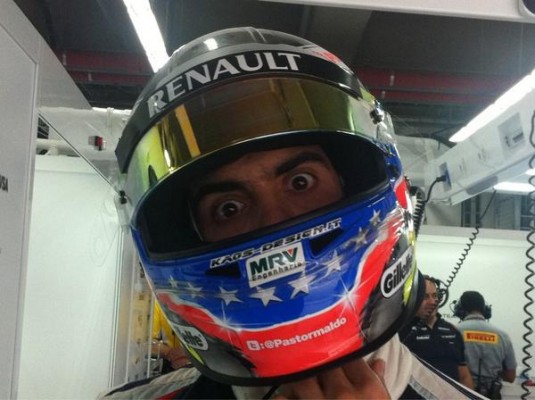 Lotus had this on the ‘unfollow’ saga:

@Lotus_F1Team: Drama in the #F1 pit lane! It looks like #Kimi and Seb may have fallen out… surely this can’t be?! #YeongamStyle pic.twitter.com/dVvWWS4y 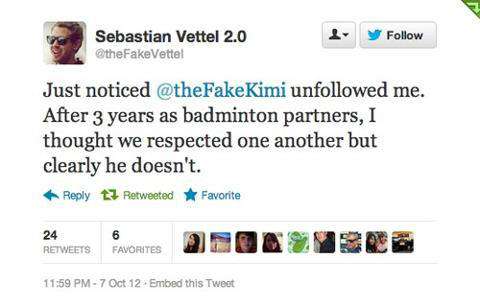 Red Bull’s spy was on a mission:

@redbullf1spy: Snap Seb and Mark doing the Gangnam Style dance with @psy_oppa? Now there’s a #SpyChallenge I can’t refuse. Let me see what I can do… 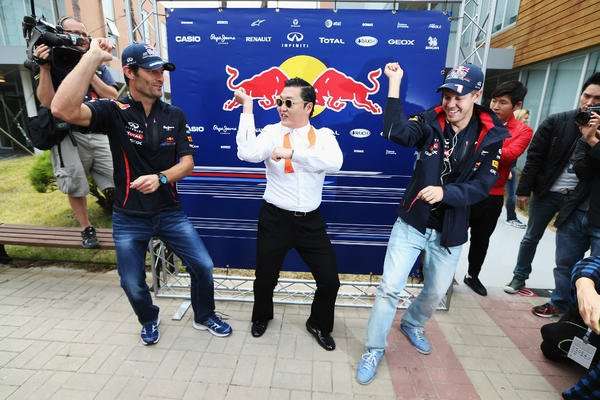 Lotus were still joking about the ‘unfollow’ saga on race day:

@Lotus_F1Team: Kimi is following @LewisHamilton; He wants to unfollow him…#YeongamStyle

Red Bull’s spy said this about the astro turf:

@redbullf1spy: Lewis seems to have run over a snooker table. Either that or he’s killed Kermit the Frog.

And on Seb’s favourite phrase:

@redbullf1spy: Honestly, when Seb says ‘that’s what I’m talking about’, we don’t know what he’s talking about. We just nod politely.

@Lotus_F1Team: Back at base, it appears Kimi’s helmet is hungry… Mmmm, balaclava #Tasty http://instagr.am/p/QwXaimLk3P/ 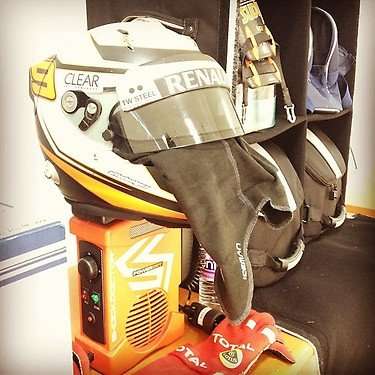 This is what the media had to say about the ‘unfollow’ saga:

@willbuxton: Just noticed @jensonbutton doesn’t follow me. After a decade of asking him stupid questions, thought he’d want to know what I had for lunch.

@JennieGow: RT @EliGP: I love twitter’s block button. If only we could have one in real life.// Ahhh is that the button Jenson will use for Lewis next?

@NobleF1: I spotted mini Kamui on the bus today en route to Nagoya.pic.twitter.com/SxKowMOe 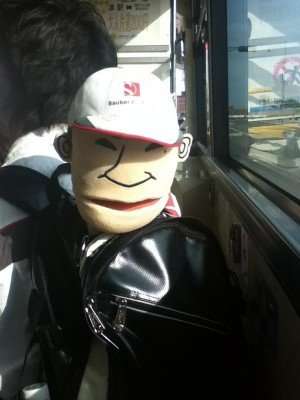 He arrived in Mokpo on Tuesday:

@alanbaldwinf1: Been reading F1 guide that came with Seoul airport bus ticket. Hmm. Refuelling and ‘bumper to bumper’ racing two things to watch out for.

It’s not easy to tell what’s on the menu though:

@willbuxton: Tonight’s meal has been a case of point at a menu and choose. No idea what we have ordered or eaten. All we know is it was fantastic.

@willbuxton: And in some cases not even a menu. In the aquarium. It looked interesting. So we pointed. It came. It was eaten. And it was great.

Most of the media travelled to Mokpo together on Wednesday:

@F1Kate: Train to Mokpo, replete with half the paddock. Too scared to sleep, in case someone snaps a pic…

Batman’s in the building: 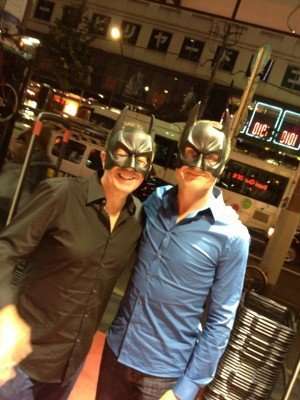 The accommodation wasn’t the best:

@willbuxton: I don’t think the Koreans get enough credit for their sense of humour. They do irony incredibly well. pic.twitter.com/HQ7qF3xR 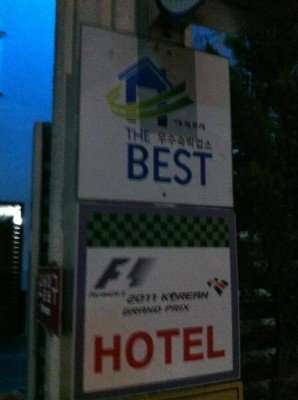 @F1Kate: How is it possible that they’ve put the media in WORSE hotels than last year? My room has no light. Not a broken light – NO LIGHT.

Will Buxton had this from Jenson Button on unfollow-gate:

@willbuxton: Jenson when asked if he’d dance Gangnam as Rosberg said he would. “Not now you’ve told me that. I don’t want to be a follower.” Wink wink.

@willbuxton: To be fair to Lewis, when he was asked if he’d be Gangnam style dancing in Korea he said, “I think I’ve embarrased myself enough this week.”

Natalie Pinkham posted this photo from the McLaren pitstop challenge: 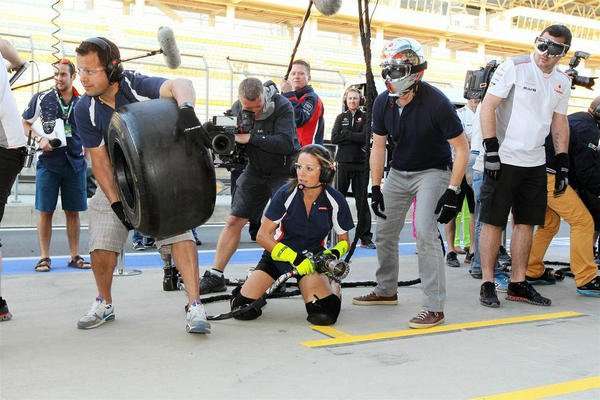 Martin Brundle had a photo of Lotus’ laundry:

@MBrundleF1: Hopefully Romain Grosjean wasn’t still wearing these when the team hung them out to air pic.twitter.com/ejuqerkC 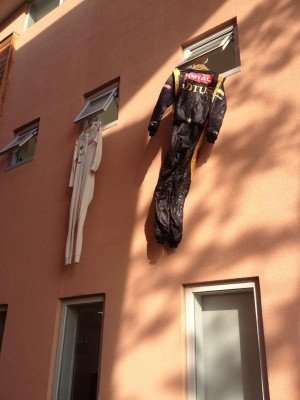 Jake Humphrey was having a go at typing in Korean:

@mrjakehumphrey: Found a button on the hotel room keyboard where I can type Korean..! ㅑ ㅣㅐㅍㄷ ㄸㅇ얃 ㅓㅐㄱㅇ무 Therefore only certain people know what I just typed!

The press didn’t think much of the support race:

@F1Kate: Whatever this support race is in Korea atm, it’s hilarious! Press room in stitches as Kim passes Kim for the lead before taking out Kim.

@F1Kate: You will not know when it’s too late. <<< Is that a threat? Sounds like something an assassin would say!

And in case you’ve been tweeting about McLaren ‘sabotaging’ Lewis’ race:

@F1Kate: Guys: whatever McLaren think of HAM’s departure, they ARE NOT deliberately sabotaging his WDC. Points mean too much money. #noconspiracy

Finally, to add fuel to the fire, here’s this from Alex Wurz:

@alex_wurz: @JensonButton follows me on twitter, and I am not even his team mate ….

Join me again next week for more from the teams, drivers and F1 media on Twitter.