Nine days before the 1955 Syracuse Grand Prix, a non-championship round of Formula One’s sixth season, Connaught received a last minute invite to take part in the race. Having spent the previous few years building sports cars and Formula 2 machines, which they had already entered in a handful of GPs, the small English manufacturer was already looking to enter F1 full time and jumped at the opportunity to enter.

Les Leston would be driving one of Connaught’s stream lined, closed wheel cars, which were legal at that time in Formula One, but the team needed a second driver to pilot their open wheeler. On the strength of several races behind the wheel of a four-year old F2 Connaught, as well as winning a one off sports car race in a Connaught at Aintree, the team’s designer and Managing Director, Rodney Clark, called up young Tony Brooks to fill the seat. 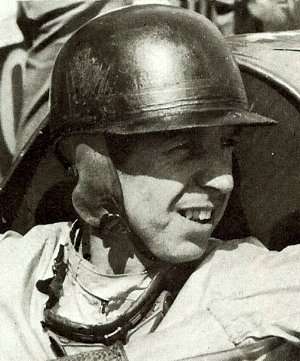 Though he had been racing various sports cars since 1952, the twenty-three year old from Dukinfield in Cheshire was in the midst of studying dentistry at Manchester University. Though it would interfere with his studies, not to mention the fact that he had never sat in, much less raced a modern Formula One car, Tony accepted the invitation.

Too poor to hire a road car once he arrived at the track in the south of Italy, Brooks hired a Vespa scooter. Having never visited the track, the young driver spent his first evening there doing lap after lap of the 3.4 mile circuit on the scooter, the bumpy public roads of which it was comprised eventually tearing the webbing between his right index finger and thumb.

Most drivers would have been learning their way around in their racing cars during that first day of practice, but Brooks and Leston were driving for Connaught and Connaught were rather inadequately funded. With both cars loaded into two old, converted A.E.C. Greenline buses, the team’s epic journey from England to Sicily had begun much earlier in the week and was eventful, to say the least.

Due to outdated paperwork, the coaches were initially impounded at Dunkirk. Once that was sorted out, an error in directional judgment put the large green buses on a route through some of Southern Italy’s most mountainous roads. With hairpins so tight that most had to be taken with multiple point turns, many hours of driving were spent at an average speed of barely 10mph.

Following a complete brake overhaul on one of the transports, the crews eventually had to drive straight through to Sicily, with the drivers taking twelve hour shifts behind the wheel. Even then, one did not arrive until late on Friday night and the other early the following morning. A whole day of practice had been missed.

With fear of losing the thousand pounds per car start money, Connaught limited their rookie driver’s practice laps in order to save the car for qualifying and the race. But even then, with little time behind the wheel of a car he had never driven at a track he had only taken to on a scooter, Brooks slotted into third on the grid behind the factory Maseratis of Gigi Villoresi and Luigi Musso.

At the drop of the green on Sunday, the two Italian machines got an expected jump on the young Englishman, who had not even had an opportunity to practice a standing start! At the end of the first lap, the two Connaughts were running 4th and 5th, having also been passed by Harry Schell in another of the five factory Masseratis entered. By lap ten, however, Brooks had moved up to 2nd behind Musso, while Leston in the sister car had spun and slid back down the running order. 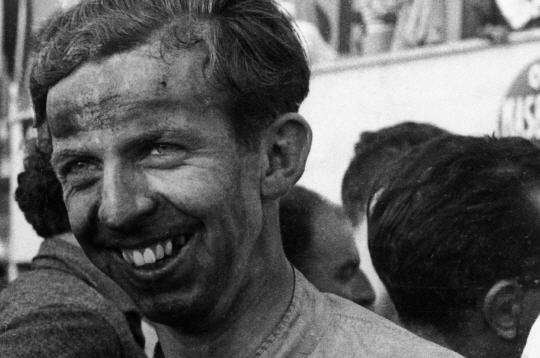 The racing dentist soon passed the veteran Italian for the lead, only to be re-passed the following lap, before taking the point once again next time around. With the Syracuse circuit shaped primarily like a triangle, lined by walls on both sides of the track, Musso was able to catch and pass Brooks at the end of the long stretches as the two cars entered the corners, but Brooks would out accelerate the Maserati as the two cars would shoot off on the next straight. Knowing that the Cannaught’s disc brakes would outlast the drum brakes on the Maserati, Brooks continued the cat and mouse game lap after lap, while the lap record was swapped again and again by both drivers.

With the Englishman was driving comfortably, biding his time, the Italian was fighting his to keep control and, by lap 50, the Connaught held a 40 second lead which could not be overcome. Fifteen laps later, Tony Brooks became the first British driver to win a major continental Grand prix in a British make since Richard Segrave in the 1924 San Sebastian GP of Spain, more than three decades prior.

One of the first to congratulate the first time winner was Luigi Musso, much impressed by the newcomer’s driving skills. A short time later, Brooks would be on a flight back to London, the unassuming young man quietly studying his dental books for his return to university.
While Connaught would close it’s doors due to a lack of funding in 1957, Tony would go on to share his first championship points paying win with Sterling Moss that same year in a Vanwall at Aintree, the first of 6 World Championship Grand Prix wins that he would take from just 38 starts at the top level. He would finish 3rd in the ’58 standings for Vanwall and take 2nd in a Ferrari the following year, losing out to Jack Brabham in the final round.

Tony retired from Formula 1 in 1961 and, at 80 years old, can still be seen at historic racing events today.