In the 1970s, the saying “Anything goes” really did go…sometimes. But once in a while, the greatest of ideas fell flatter than the engine note of a seven valve V8. In 1972, a much hyped publicity stunt of a race held great promise, yet delivered nothing more than a minor footnote in racing history and a few extra quid in a certain famous team’s green and yellow and/or black and gold cockpit. 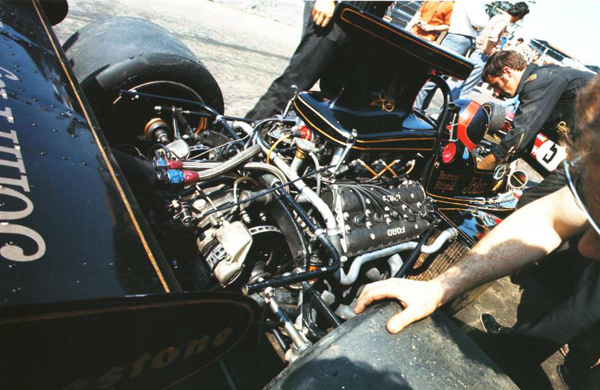 Early in 1971, the powers that be at Rothmans, then Great Britain’s third largest cigarette company, formulated a grand undertaking. With a budget of 100,000 pounds sterling, half of which would be outright prize money, they would hold a race at England’s Brands Hatch circuit. The prize money itself, 20K of which would go directly to the victor, was the highest in European racing history, considerably more than a Grand Prix or Le Mans win offered. Surely that alone would be enough to lure contestants from all over the world, with the entry list itself being where the event’s true exotic nature would lie.

Run to Formula Libre or “Free Formula” rules, there essentially were no rules or specifications. With an all out ‘run what you brung’ race, open to any interested open wheel, sports car and even stock car series competitors, the organizers hoped to entice the best of the best from Formula One, Indy Cars, Can-Am, F5000, Le Mans prototypes and sportscars, F2 and Grand National stockers. Stewart against Foyt against Petty against Donahue, each in their own daily drivers.

But even with a year and a half of advance notice ahead of the August 28th, 1972 race date, competing series schedules would prove to be the major downfall of the Rothmans 50,000. With annual racing budgets already set for the majority of teams, most of the big names could not be coaxed into deviating from their already set plans for the year. The Can-Am series were running at Elkhart Lake the day before the race, excluding big names like Revson, Follmer and Hobbs, while the Indy cars were set to be at Ontario, California the following weekend, making it difficult to find merit in a trans Atlantic flight the weekend before.

Of all the major international series, only the Formula One teams had any real opportunity to take part. However, the majority of them demanded the traditional appearance money which was common for most GPs, a request which Rothmans steadfastly denied. By the time the August Bank Holiday weekend rolled around, only a handful of F1 machinery would be represented in the thirty car field; two BRMs for Jean-Pierre Beltoise and Howden Ganley, Brian Redman’s McLaren and Henri Pescarolo and David Purley, each in a March. Robs Lamplough in a BRM, Francoit Migault in a Connew and Herve Bayard in a Surtees all attempted to qualify but did not make the field.

The star of the weekend and the only real player (pun intended) to show up was Team Lotus with a 72D for Emerson Fittipaldi. Normally sponsored by the black and gold John Players cigarettes, Players originally declined the offer to participate. One of Emmo’s personal sponsors, coffee company Cafe do Brasil, then paid for the trip, outfitting the Lotus in a by then unfamiliar green and yellow paint scheme for the one off event.

The remainder of the field would be comprised mainly of F2 and F5000 cars, featuring such current and future stars as James Hunt, John Watson, Alan Jones, Carlos Reutemann, Graham McRae, Jody Scheckter and Vern Schuppan. Only the lone Lola T280 of Mario Casoni would represent sports cars in the race.

Even the list of those who did not qualify was impressive, including Ian Ashley in a F5000 Lola, Peter Gethin’s Chevron B20 and Bob Wollek in a Chevron B21. Originally expected to attend was David Piper’s mighty Porsche 917, but like Andy Granatelli’s mothballed turbine-powered Indy cars, which were also invited and rumored to be appearing, the entries never materialized. 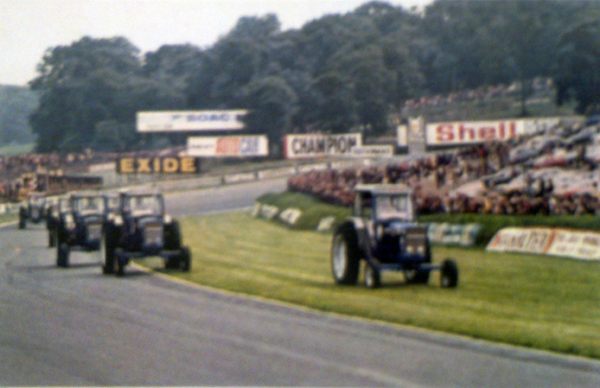 Just prior to the race itself, Players decided that it might be best to re-paint the Lotus in the traditional black and gold livery, as it would have been a shame to simply take Rothman’s money in any other color scheme. And take the money was exactly what they did come race time. With no other real competition, Fittipaldi made an easy afternoon of it. By the end of the 312 mile race, he was nearly a full lap ahead of the 2nd place McLaren of Redman. Pescarolo’s March came 3rd, two laps behind, while both BRMs fell by the wayside with mechanical issues. James Hunt helped to make a name for himself by finishing 5th in a F2 March for Hesketh Racing, just ahead of Wattie’s Chevron B20.

With the race itself being rather anticlimactic, the highlight of the weekend could have very well been the Celebrity Tractor Race. Held prior to the main event, the Top 10 qualifiers were each handed their very own gigantic farm machines for a one lap ‘sprint’ race of Brand’s short Club circuit. By virtue of taking a shortcut through the grass at Clearways, F1 newcomer Jody Scheckter took the slightly comical victory, some seven years before claiming the World Driver’s title.