During pre-race coverage of a stock car race at Taladega during the late 1980s, I recall an announcer standing against the wall at the top of the track, his foot resting on the door of a VW Beetle. With just a slight push, the Bug began a gentle, side over side rollover down the embankment before coming to rest on the apron. This was at a mere 33 degrees of banking. The historic and ominous Monza towered from a paltry thirty, while the superspeedway at Daytona, for all its Southern glory, only comes in at thirty-one.

It seems that time has brought reason along with it, for half century ago, an ominous, red brick wall once stood fast over the south-western districts of Berlin. At forty-three degrees, the north curve of the Automobil-Verkehrs und Ubungs-Strabe, more widely known as AVUS, was almost more vertical than it was horizontal. Easily taken flat out, the long corner lacked one simple amenity; a retaining wall. 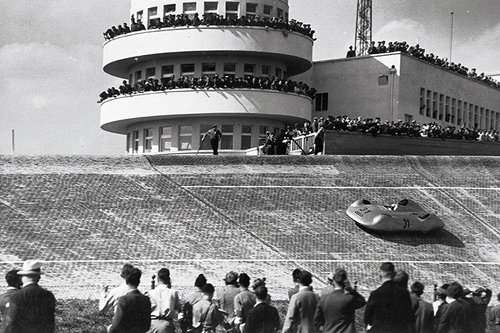 Originally conceived by the Automobilklub von Deutschland in 1907, the circuit was initially planned as both a race venue and a motor industry test track. It would take several years, however, to raise enough funds to begin construction, but the financing ran out in 1913 just before the Great War began in earnest, bringing construction to a halt with only half of the circuit completed. Following the conflict, German entrepreneur and politician, Hugo Stinnes resurrected the project and saw it through to completion in 1921.

Built to simultaneously act as part of a dual autobahn carriageway, the finished AVUS measured over twelve miles in length, the bulk of which was comprised of two parallel, six mile long straightaways. At the southern end of the track was a six degree banked hairpin, which would periodically be moved further north during the trackâ€™s long history, essentially halving the circuit length each time. At the north end was a wider radius, five degree banked turn. With three huge grandstands, one at both ends and a larger complex at the finish line, along with several standing areas, the track was able to hold as many as 400,000 spectators.

The first German Grand Prix, held at AVUS in 1926, was won by an up and coming junior Mercedes salesman/driver named Rudolf Caracciola, his first major win on the way to three eventual European Driverâ€™s Championships during the â€˜30s. Other pre-war Grand Prix legends to find victory at AVUS would include Baron von Brauchitsch and Achille Varzi.

In 1935-36, the area surrounding the track experienced heavy rebuilding and growth due to the upcoming Olympic Games. The north curve was moved further south to make room for a new access road, but rather than duplicate the original turn, something special had to be put in place in order to compete with the new Nurburgring circuit. In an effort to make AVUS the fastest racetrack in the world, motor racing was put on hold for a year so that the new, 43 degree banking could be built. However, for the 1936 Berlin Olympic Games, the track itself was used for several events, including the marathon and cycling road race.

The first race on the new circuit was held in 1937. As it was a non-championship race, streamlined vehicles were allowed to compete alongside the GP cars. Hermann Lang won the event in a streamlined Mercedes Benz W125 at an average speed of 162.063mph. To put that speed into perspective, it would be another 35 years before Mark Donahue would win Indy in 1972 with a higher average speed. Michael Schumacher won the 2003 Italian Grand Prix at Monza, the fastest Formula One race in history, at an average speed of just under 154mph.

Deemed to be too fast for modern Grand Prix cars following World War Two, the track was cut in half by a new south turn, shortening the overall length to just over five miles. Another non-championship race was held in 1954 before AVUS wrestled the German Grand Prix away from the Nurburgring in 1959 to host itâ€™s only round of the Formula One World Championship.

The race itself was notable for many reasons. The event was the only time a F1 Grand Prix has been held over two heats, both of which were won by Brit Tony Brooks. The racing dentist from England took the last of his six GP victories on his way to 2nd in the season championship. He was followed across the line by his teammates, Dan Gurney and Phil Hill (two of four Yanks in the filed), making for a Ferrari sweep of the podium. It would also be the fastest GP held to date at an average speed of 143.3mph.

The most memorable moment of the race was arguably an incident involving Hans Herrmann in which his brakes failed as he approached the south curve. He downshifted in order to scrub off as much speed as possible before brushing the straw bales lining the track, causing the BRM to begin a series of violent rolls. Herrmann was luckily thrown out during the first flip and slid down the track, relatively uninjured, watching as his car tore itself apart. 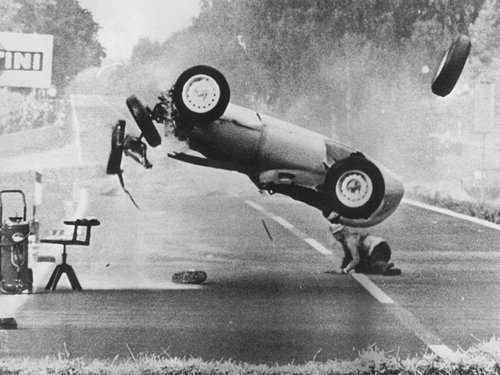 The race weekend also saw the unfortunate death of former GP driver Jean Behra, who was taking part in the sports car support race. Having just lost his ride in the Ferrari team, Behra was trying to prove that he still had the speed to be in F1 when he lost control of his Porsche RSK on the banking. As there was no wall or guardrail lining the top of the track, the helpless Frenchmanâ€™s car landed in the parking lot far below, an incident which sadly supported the bankingâ€™s nickname, â€œWall of Deathâ€. 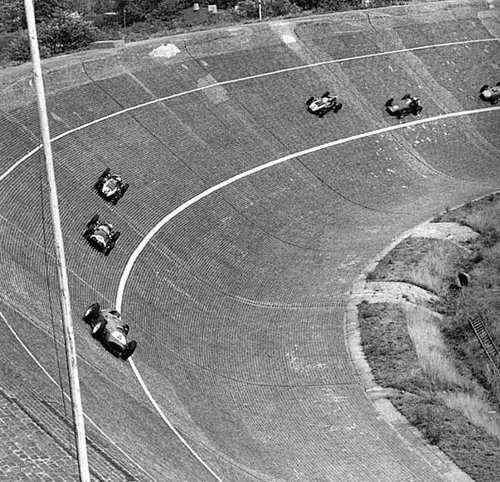 Due to the inherent dangers involved, this would be the last major international event held at AVUS. The banking was dismantled in 1967 and racing events were continued with a flat north turn, though the circuit was primarily used only for tin top and Formula 3 races up until its final event, a touring car race, was held in 1998. The round race control tower, with its prominent Mercedes-Benz and Bosch sponsorship signage, still stands at the north end, now used as a restaurant and hotel. The old wooden grandstands have also been preserved and now stand protected as a national historic monument.