After successful running yesterday I’m sure most teams were hoping for a repeat today and for the majority of the teams they continued to lap reliably, Force India in particular will be pleased with the 158 Nico Hülkenberg managed today (the furthest anyone has gone in a day’s testing this year). For McLaren and the returning Kevin Magnussen though it was to be another problem, with an oil leak stopping running this afternoon after only 39 laps for the day.

Looking at the total number of kilometres driven so far in pre-season testing compared to last year, we can see that only Williams, McLaren and Force India have yet to surpass the distance covered in 2014. 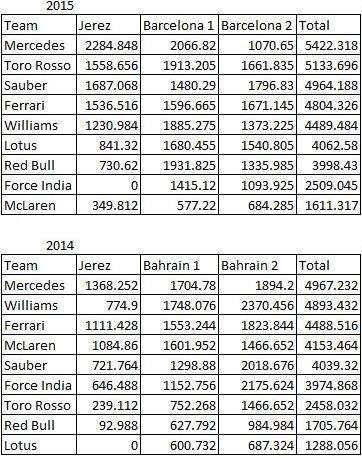 With another day to go, Williams should have no trouble in passing the distance they achieved last year, while Force India may equal McLaren’s total with their 215 car despite only running it for three days compared to 12 for the Honda powered machine.

The speeds over the start finish line from yesterday were made available today and they provide some interesting reading: 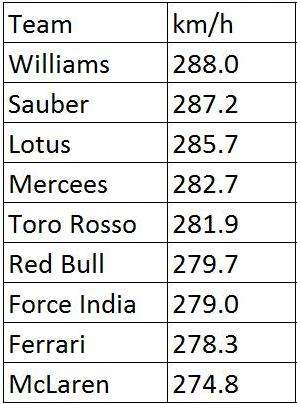 The speeds can be an indicator of the relative down-force levels the teams are running to achieve the lap times. While McLaren and Force India may still have set up work to do as their cars have run comparatively short distances, it is worth noting the speed differences between the works teams (Mercedes, Ferrari and Red Bull) and their customers. The works teams are choosing to run more down-force than their customers, significantly so in Ferrari’s case.

Most teams went faster today than yesterday (an indication of improving track conditions, or genuine improvements to the cars?) with only Sauber and Mercedes going slower than on Friday. However only Williams, Red Bull and Force India did more laps today. As all bar the troubled McLaren and Mercedes (who spent a long time changing the configuration of the car to an ‘experimental’ set up) completed over 100 laps this isn’t due to reliability worries, just that they are getting through their programmes.

Hamilton ended the day fastest after using the soft tyres to beat all those who had set times on the super soft compound earlier. While he didn’t beat Rosberg’s time from yesterday, he got within a quarter of a second to record the second fastest time of winter testing so far. Despite this, the whole field ended up the closest they have been through winter testing, and the slowest team today (Red Bull) have gone faster during this test.

The final day testing tomorrow, will we see Mercedes use the super soft tyre to really demoralize the opposition, and what about some performance runs from the new Force India or McLaren cars?