With the conclusion today of the fourth day of the first pre season test at Barcelona, we are halfway through the testing for this year.  When compared to 2015, there are four fewer test days this year, as we have lost the testing that took place at Jerez.  2015 did however have two tests at Barcelona, so it is easier to compare the figures from the first Barcelona test of 2015 to the test which has just finished.  An important point to note however is that for the 2015 test, the teams had already had the opportunity for four days of testing, so the cars weren’t as new as they were this time around.

Looking at the distance covered in this test compared to the first Barcelona test in 2015, we can see that most teams have improved, with Mercedes going half as far again as they did last year. 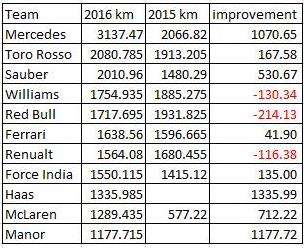 To be honest, this is possibly a more valuable statistic that the lap times, as not all the teams were going for fast times this week, with only two trying the new ultra soft tyres, and two teams sticking with the medium tyres.  However, it is noticeable that three teams (Red Bull, Williams and Renault [Lotus]) covered fewer laps this time around than last year.  This could just be that at the first Barcelona test of 2015 the teams had already had four days of testing to sort the early car teething problems out.  What is very encouraging is that all teams were present (even if Sauber are running last year’s car), and that none of the teams had as bad a start as McLaren last season.  Even Manor who managed the shortest distance covered twice the distance that the Woking team managed last time.

Moving onto the times, as this seems to be what most people judge the teams on, Ferrari, Force India and Red Bull were the teams that used the ultra soft and super soft tyre compounds, and unsurprisingly were the fastest over the four days.

When compared to the times the teams were doing in the first Barcelona test last year, three teams went faster, six teams were slower and two didn’t test last year.  Most of the differences could be explained by the tyre choice, with Ferrari and Red Bull setting faster times in 2016 thanks to using softer compound tyres, while Renault [Lotus], Sauber and Toro Rosso went slower this year as they were using harder compound tyres.  Only four teams (Force India, McLaren, Mercedes and Williams) used the same compound of tyre in both years to set their best time, and Force India went faster, and the others slower.  This just goes to show that at this stage of testing it is very hard to make any sort of judgement based on lap times, as without knowing the team’s individual test programme it is impossible to compare.

Awesome analysis though thanks for the update I was extremely curious about this information and was going to put it together myself this weekend.

Question: are the 2015 SS and 2016 SS the same tyre? This goes for all tyres. I was under the impression they were all new designed with the two layer tyres this year.

I think the tyres have less tread this year, to promote an earlier ‘cliff’ drop off. This will have some impact on the tyres behaviour. I don’t know if the actual compounds have changed or not.

Ted Kravitz goes into some detail about 2016 tire construction on his Notebook short for Day 3. The cliff fall off in performance is now more gradually than in the past.

one think is for sure Merc reliability is looking quite good. hopefully you will give us the aggregate of each team at the end of winter testing.

Anything to help with the staff picks for Australia.

So, I think it’s safe to say that most of the teams are getting a handle on the reliability issues. Looking at speed, however, I think we can also say that Ferrari is a real threat to Mercedes, Force India is going to improve, TR is going to put a scare into RBR, Haas will definitely be midfield, and Manor and McLaren are going to be exactly where they were last year.

Thanks for the data and analysis Dave. As ever it is really hard to draw any conclusions from testing, especially the first test. We were impressed when Mercedes broke 2000km in testing last year, so to raise that to over 3000km this year sends a strong message to the rest of the grid this year. They must have got through a heck of a long testing schedule. At least there were no reliability disasters for Renault or Honda p.u’s this time around, though a Tag-Renault does seem to be able to push a RBR around faster than an all Renault… Read more »

Previous article
Thanks to you, we passed 2 million downloads!
Next article
Nasr: Haas F1 a legitimate threat