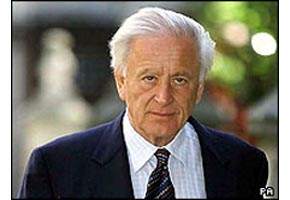 The FIA has announced its intention of retaining high-profile attorney Anthony Scivener QC to investigate the allegations that Max Mosley’s foray with five hookers in a Chelsea flat did not contain “Nazi-style” themes.Mr. Scrivener may be well know among UK legal circles and was asked to represent Saddam Hussein in his trial. Mr. Scrivener was very vocal regarding the trial of Saddam:

Perhaps Mr. Scrivener will find the “theatrical farce” in Max’s exploits but my hunch is that Max himself has a role in the hiring of Mr. Scrivener on the FIA’s dime to eradicate or give an opinion that there were no Nazi-style themes to his sexploits. In the end game, Mr. Scrivener’s opinion will be just that; one’s mans opinion. Nice of Max to get the UK’s most prominent barrister and not even have to pay for it.

Why is the FIA spending Membership’s money to determine if there was a Nazi-style theme? Why is this the FIA’s duty? Should they not let Max state his case on June 3rd and let the members vote their voices? If I were a paying member of the FIA, I would be concerned that my organization was spenidng money trying to render an opinion on if Max’s hooker-fest had Nazi overtones.

Mr. Scrivener’s CV. you do the math:

He has a wide common law practice, including all types of civil, criminal, commercial and public law work, not only in England and Wales, but also in Hong Kong, Singapore, Malaysia and the West Indies. He is a member of the Jamaican Bar and the Tasmanian Bar.

His practice has seen him involved in contract and tort; defamation and media law; monopolies; passing off; consumer law; construction law:; food law; trade union (acting for miners) and employment law; disputed wills and other documents; personal injury; local government; race relations including acting for the Commission of Racial Equality; landlord and tenant; railways cases (acting in relation to both accidents and Inquires where he acts for ASLEF. His practice covers appeals including House of Lords, Privy Council, High Court of Australia, Chancery matters, public inquiries and inquests. He also advises the British Film Institute.

He has considerable and extensive criminal law experience, including many high-profile cases. He has a wide ranging appellate practice and has made numerous appearances before the House of Lords and the Privy Council.

He undertakes European Law matters and cases concerning human rights (on a Pro Bono basis if necessary), as well as defamation and media law, and personal injuries.

The 2007 Chambers & Partners, where he is in the first rank of practitioners in Consumer Law, describes him in these terms:

Anthony Scrivener QC is â€œobviously a legendâ€ and, through his longevity in the field, has built a â€œphenomenalâ€ reputation.

The 2008 Chambers & Partners guide says that the â€œhugely experiencedâ€ Anthony Scrivener QC, who is praised by both competitors and clients as a â€œtop-class performer,â€ can turn his hand to many different aspects of consumer law, such as food labelling and advertising. Sources note his â€œapproachable yet sharpâ€ manner, and endorse his â€œsuperb presentation skills.â€