Lewis Hamilton avoided any penalty during the German Grand Prix after crossing the pit entry line and re-entering the track. After a 45 minute meeting with Lewis, the team and race stewards, the FIA released the official decision below: 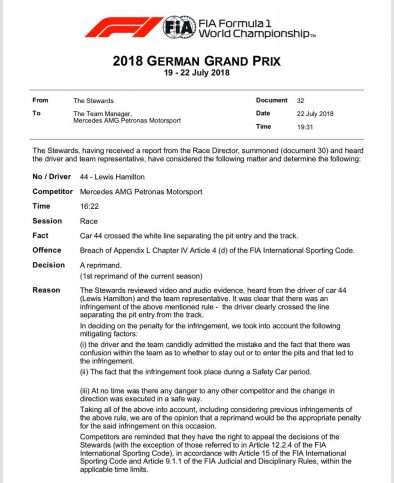 The regulation seem straight forward as a rule and the FIA were careful to mention they reviewed similar incidents, but it is not known which incidents and context they used for their reasoning. Many fans on social media have applauded the decision while others are upset.

The reasoning is curious with respects to “ii” and “iii” as it applies context to the ruling with regards to a Safety Car Period and no immediate danger to those around him. Are these factors stewards can use when assessing this violation? The team argued communication confusion and the race stewards offered SC period and no immediate danger as supplementary context to the decision.

I can’t recall in recent memory if those supplementary contextual issues have played a role in a past pit lane infraction but I do know that pit lane infractions such as unsafe release is a zero tolerance infraction that does not allow for a team to argue its position over communication errors on when to release a car. A team arguing communication confusion on when to secure a car in pit lane seems the like a similar issue at the other end of the pit lane.

How did you see the incident and the decision? Certainly, you wouldn’t want to impose any post-race penalty that had a major impact on the title race but on the other side, rules have to apply to everyone or they are no rules at all. Combined with the lack of consistency, this malleable application of penalties for regulation violations seems to be adding to the inconsistency argument and frustration.

I would hate to see Lewis lose the win over a pit lane infraction, but I also am curious as to the application of the regulations and how malleable they can be given the context a race stewards deems viable to either strengthen or lessen the punitive actions taken. What do you think?

What comes to mind is a steering wheel not being reattached into the car when the car stopped on track during the cooldown lap. Against the rules, but the situation was looked at and deemed no penalty.

I am squarely in the camp, if it’s a rule enforce it. But the FIA hasn’t acted that way in recent years…. track limits anyone?

I wasn’t sure of the wording of rule he broke, so here it is:

So, basically, the stewards have sole discretion as to what was and was not foreseeable. If they decided that it was unforseeable and punish with a reprimand, then that’s fine by me.

In this case, it seems that the team offered “chaos” and team radio confusion as the force majeure and I’m not sure I find that context compelling enough to be honest.

Force majeure is supposed to mean things entirely out of control. This one seems to come down to “Kimi took new tires so we wanted to stay out” and “we screwed up Bottas’ pit stop and we didn’t want to screw up Hamilton’s”, neither of which remotely qualifies. Based on this incident and the differing penalties for Kimi and Vettal for collisions with a Mercedes in the last few races, it seems pretty clear that the FIA is far more interested in protecting the Lewis-Seb championship battle than they are in logical and consistent punishment.

Devils advocate (not Lewis fanboy). I can guess this rule was meant to prevent exactly what Hamilton did, which is cut out of the pit enty at the last moment and potentially creating a dangerous situation. But the wording of the rule leaves a lot to be desired. 1) The obvious one, Hamilton never made it to pit lane, only pit entry. So as written it doesn’t even apply. I’m not saying that wasn’t the intention, just what is written. 2) Now the other argument is the crossing of the line. If we say you cannot cross the line separating… Read more »

I’m sure part of the stewards ‘discretionary thinking’ was the fact the race had ended, and the trophies had been awarded.
A decision that changed the race result would have created huge adverse publicity for F1, so ‘discretion being the better part of valour’, the reprimand was the wise choice for the stewards.
A soft call in my eyes, but understandable.

I’ve come to peace with expecting great inconsistency and subjectivity with application of rules in F1. While not yet perfect, I think they are at least close to achieving the right ‘zero tolerance’ approach for the violations with the greatest potential to human beings around the track (unsafe release, and double waved yellows for stewards and machinery on the track). Beyond that, it’s entertainment as much as it is sport – and every sport struggles with split-second grey area calls that are not applied consistently (holding or pass interference could be called on every play in football, block/charge calls in… Read more »

The rule exists largely to stop drivers staying on the racing line too long, then slowing and diving late into the pits.
At Interlagos each year (and at other tracks no doubt), drivers regularly cross the pit entry line as part of their normal racing line around the corner. Very few of these attract any call for penalties.
What Hamilton did is a more extreme version of this routine practice, but it isn’t what the regulation was written to prevent.