The Free Practice 3 session was a wet affair but things dried out for the start of qualifying even if the teams didn’t get a chance to try out any changes they’d made overnight to get on top of the Paul Ricard circuit.

It has been 28 years since Formula 1 raced here and the teams didn’t have loads of data from previous seasons to lean on for car setup. For Mercedes, they were hoping their delayed spec 2 power unit would provide enough shove to overcome any chassis deficit they may have. If Free Practice 1 and 2 were any sign, Mercedes had good reason to be optimistic for Qualifying.

With a potential threat of rain, all cars were quick to get out for their initial runs. With a narrow track, traffic could be an issue as well. Initial runs had Ferrari’s Kimi Raikkonen on top with Hamilton and Bottas just behind. Vettel in a distant 5th with Red Bull’s Max Verstappen in 4th. Hometown hero Romain Grosjean put in a respectable 6th place initial run.

A good performance from both Sauber drivers getting through to Q2. Fifth time this season Williams are out in Q1 and both McLaren’s were out in Q1 so no Freddo bars for the team. Two storied British teams out in Q1—Williams and McLaren.

At the very end of Q1, the rain began to fall and umbrellas went up. The cars were all queued up waiting for the session to begin so they could throw down a banker lap with Red Bull and Valtteri Bottas on Supersoft while Ferrari and Lewis Hamilton were on Ultrasofts.

Hamilton and teammate, Bottas, set the top pace with a 1:30.645 and Valterri .582s off Lewis’s pace. Ferrari’s Raikkonen in third with Vettel languishing down in 8th. A second run from both Ferraris left Vettel in second and Raikkonen in third. Initial runs also had both Haas F1 cars in the top 10 nested in 7th and 8th.

The final runs found both Red Bull cars and Valterri Botta switched to the Ultrasofts. Ricciardo, Verstappen and Bottas backed off so they will start on Supersofts on Sunday. The track remained dry as the spitting rain ceased so all cars were on track for the final effort. Nico Hulkenberg had a lot to make up for as he was dead last after initial runs. Charles Leclerc took his Sauber into Q3 adding another terrific qualifying effort to his CV and justifying his bid for Kimi Raikkonen’s seat at Ferrari in 2019.

Both Force India’s out in Q3 as well as Nico Hulkenberg missed Q3 by .06s.

Ferrari were waiting for the green light for the Q3 session to come on and as the rain was unpredictable, the threat of changeable conditions meant that the teams had to get out quickly for a banker lap. Ferrari had been off the pace to Mercedes all weekend, so it was critical to get a dry run in early. Unfortunately, both Mercedes were right behind them doing the very same thing.

Vettel was first over the line with a 1:30.400 and Raikkonen just behind him but both were eclipsed by both Mercedes with Hamilton leading with a 1:30.222. Both Red Bulls in 4th and 5th. The session was then stopped as Romain Grosjean crashed and brought out the red flag. Not a way to exit the qualifying session for your home grand prix and Gunther Steiner’s face spoke volumes about how the team felt. The crash spoiled his teammate, Kevin Magnussen’s, chance to set a lap time.

As the clock started again with 6:13s left in the session, Ferrari’s Kimi Raikkonen was the first on track on a new set of Ultrasoft tires. The other teams were still sat in the garages. Kimi overcooked turn three and abandoned his first attempt. As he cycled around for another go, both Mercedes came out for their final runs ahead of Sebastian Vettel.

Vettel was struggling for grip on his final lap trying to find pace and this left Lewis Hamilton to claim his 75th pole position with Bottas in second and Vettel in third. Verstappen pipped his teammate for 4th place leaving Ricciardo in 5th. Charles Leclerc managed to beat Kevin Magnussen for a strong 8th as Kimi Raikkonen couldn’t find the grip either leaving him down in 6th. 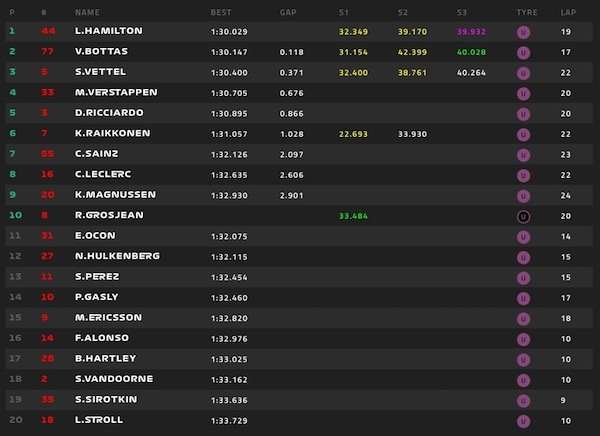 Renewed hope for Haas, then Grosjean smacks the wall.

Looks like a tricky track which will hopefully make for some better racing tomorrow.

If Ferrari wants to have a chance at the constructors title, they need to dump Kimi pronto. Another botched qualifying for him and he will be finishing 6th in the race again.

Leclerc is out driving that Sauber.
Probably still a bit young to stick him in a Ferrari (and with Seb there it would be hard). Maybe put him the Haas to replace Romain?