That’s it. The 2016 driver lineup is complete. Manor Racing have signed Indonesian Rio Haryanto who has long been linked to the team from his GP2 and GP3 days. The Indonesian driver finished 4th in the GP2 series for Campos Racing last year.

As one would expect, Haryanto is said to bring a significant financial backing from the state and will join Pascal Wehrlein to complete Manor’s lineup.

“Manor Racing is a team with an exciting vision and ambitious plans,” said Haryanto

“They have produced a great package and I can’t wait to get in the car.

“Melbourne will be a huge moment for me, my country, supporters and fans.

“I want to thank everyone who’s been with me since I started in single seaters; 2016 is my chance to reward that faith and represent Asia in F1.”

“We are delighted to announce Rio as our second race driver for 2016.

“Rio’s been racing since he first got into a kart at six years old.

“He’s tenacious on and off the track and made a big impression on last year’s GP2 battle.

“Rio’s huge following in Indonesia is great for the team and for F1.

“They are keen to see him on the grid and we’re confident that we’ll see him enjoying some exciting battles in the year ahead.”

He may have a huge following in Indonesia but I wonder what kind of impact his inclusion will have on the fans in that part of the world for Formula 1?

On a biased front, many American F1 fans were really hoping Alexander Rossi would have made the cut at Manor having done a great job of it last year but equally many British fans may have been slightly gutted to hear that Will Stevens lost the seat to Haryanto. Money speaks loudly in F1 driver opportunities…perhaps too loudly these days.

Is it just me or does it seem this will be one of the best field of drivers the sport has had in it’s history. Most teams seem to have 2 great drivers, or atleast 1 driver with great talent. Although I know nothing of Haryanto even Manor with Wehrlein has atleast one great driver, especially compared to last year with Mehri and Stevens. And since magnussen has replaced Crashtor Renault also has had an boost in that department. This is starting to look like a great year, hopefully Ferrari can take the fight to Mercedes and we’re set for… Read more »

So, what’s going to happen to Rossi?

Racing further up on the grid in Indycar.

I still don’t get how Rio actually got a superlicense, unless he already had one from some F1 testing he did prior to the new rules, 2 or 3 seasons ago.

That’s what I’ve heard elsewhere, he tested prior to the rules change.

Haryanto had two days of F1 testing for Marrusia in 2012, and a day last year, also for Manor Marrusia. So as an existing super license holder with current experience, he gets to keep the license for this year.

The interesting bit will be the situation for any reserve drivers if they are needed during the season. AUTOSPORT only lists two teams with nominated third drivers (Force India have Alfonso Celis who tested last year, and McLaren have Stoffel Vandoorne who qualifies with 105 points regardless of any testing).

Manor have missed an opportunity!
Maybe Haryanto has driving talent, and brings a big sackful of cash, but when it comes to a potential winner of the Lewis Hamilton fashion award, nothing!
Try a Google search, Rio Haryanto fashion – race suits and nothing else, at least Will Stevens had ‘boy band’ style and scored at least one LHF award.

On the point of missing an opportunity, I feel they should have doubled down on their driver line-up. Probably can’t argue against the Pascal appointment being he’s Merc backed, but Rossi seems well-suited to F1 (i.e. beating Stevens). They have Haas to beat and while I don’t think they will beat McLaren, they could certainly have given it a go, always wanting to improve at least one place in the standings.

What makes you think Rossi would be quicker than Haryanto? I haven’t followed the career of either of them, so this is a genuine question not a wind up.

I didn’t mention quickness. Rossi would be better in terms of marketing with the American fan base the the potential to grow the sport more than it could grow in Indonesia.

Fair enough Coji.
I’ve just had a quick look on http://manorf1team.com/#
And guess what! One of Manor’s two main partners is ‘Pertamina’ an Indonesian natural gas company. That may have swayed their decision.

Yeah, is a huge Pertamina logo across the rear wing too.

Is that at testing? As it’s not on the launch car.
The first bit of marketing has worked, I now know that Haas manufacturer high tech machine tools, and Pertamina sell natural gas in Indonesia.
Brand awareness up 100% in New Zealand – tick!

Yeah – appears on both cars.

Also on Haryanto’s overalls and his helmet. 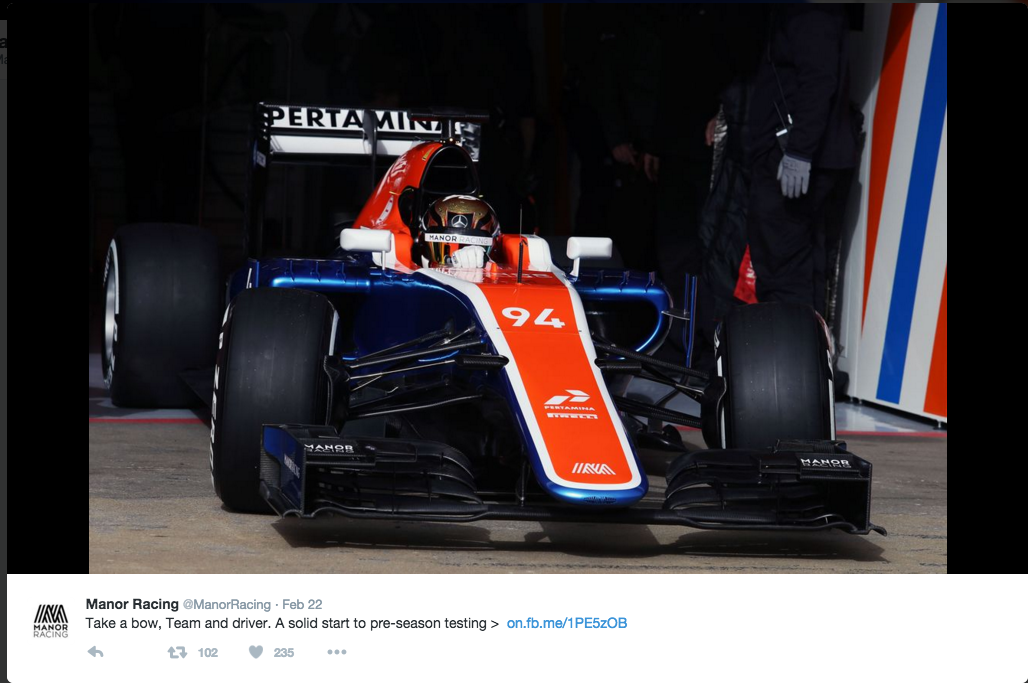 Got it! Look at the right car and there it is!