In a bid to add a bit of extra excitement to what in recent years has been a somewhat lackluster full month of May, IndyCar will be holding it’s inaugural Grand Prix of Indianapolis tomorrow on a revised combined road course. Formula One also ran for eight seasons between 2000 and 2007 on a circuit which comprised of a portion of the Brickyard’s oval and a then newly constructed infield section.

Though the new layout is relatively the same as the one that F1 ran on, the IndyCar series will compete on the newer layout used by MotoGP, though with the competitors running clockwise as opposed to the direction the bikes run.

The portion of the infield around Turn Nine has been reconfigured, but the biggest difference between the F1 iteration and the new layout is the use of Oval Turn One. When the Formula One fraternity raced at Indy, the first turn used for the Indy 500 was the final corner of the F1 circuit. The GP cars came off the infield onto the short chute between Oval Turn Two and One, with that last long turn slingshotting the drivers down the long front straight. 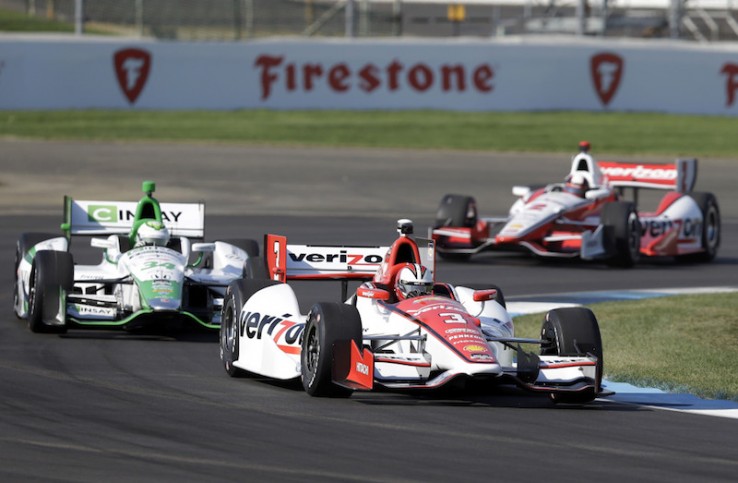 The IndyCars do still use a short portion of the short chute, but turn right back into the infield for a three corner complex before reentering the front straight at what is essentially the entry point of Oval Turn One. The new layout is now sixteen corners, three more than the previous circuit, but is 2.43 miles compared to the 2.6 that the GP cars ran on.

Surprisingly, the lap times are fairly similar. During qualifying for the 2004 USGP, Rubens Barrichello hustled his Ferrari around that version of the circuit in 1:10.23 seconds to take pole position. The fastest time in yesterday’s IndyCar practice was a 1:10.46 set by Scott Dixon. Granted, the new layout is slightly shorter, but the IndyCars have three more corners to deal with. But then there’s also the fact that Rubens’ quick lap was set some ten years ago. So ya’, there’s that.

Qualifying for the first Grand Prix of Indianapolis will be held today, though it looks as if that may turn out to be a wet session, so yesterday’s practice times may be the quickest of the weekend. Back in that 2004 USGP in which Rubens set the fastest pole time of the eight F1 races, qualifying saw a full 4.58 seconds separate the first and last place cars on the grid. At Indy yesterday, all twenty-five cars to set practice times were split by a mere 1.1 second.

Recent years have seen the lack of a real Bump Day, not to mention a line of drivers with helmets in hand trying to find rides. Hard financial times have, of course, hit teams and the series just as they have the rest of us. But in the lead up to the 2014 Indy 500, the Grand Prix of Indianapolis will hopefully be an exciting addition to the month of May.

Previous article
F1B Staff Picks: Spanish GP
Next article
Is it the driver or the car?