Indy 500: The ritual and the relationships

Some rituals, one could argue, may not be the best ideas. Perhaps sacrifices to the sun god or arranged marriages or even eating the worm at the bottom of a tequila bottle. Regardless, there are some rituals that have stood the test of time and the relationships that forged them are as strong as they’ve ever been.

The motorsport pilgrimage to the Indianapolis Motor Speedway in May is just such a ritual and even though the Indy 500 race isn’t until Sunday, the fans poured through the gates this Friday morning to the final practice session prior to the race as well as the historic Indycars run as well as the Indy Lights. The crowd was bigger than some actual races in other series.

The relationship between the Indycar and Indy 500 fan and the IMS is so steeped in history that it can catch one off guard when looking at the crowd. Sure, there are lots of old timers and men in the stands but I’ll be honest, I was incredibly encouraged to see lots and lots of women and men in their 20’s and 30’s all here to watch racing and enjoy the weekend of revelry and fun. Very encouraged indeed. 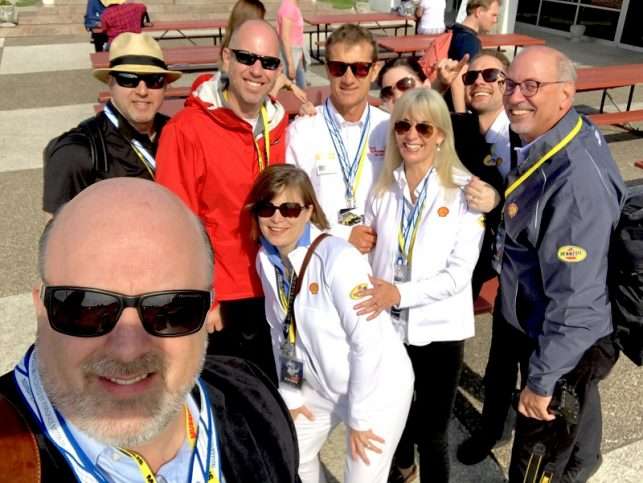 I was reminded of the critical nature of a series building a relationship with its fan when I visited the Penske Team’s garage as a guest of Shell V-Power Nitro+. This relationship is, for lack of a better comparison, is similar to Shell’s Ferrari relationship…America’s version of the Shell/Ferrari partnership if you will. Not exactly but it’s close enough for consideration.

There is one ritual that Penske does and that is wrap their carbon fiber front suspension in chrome in a nod to Roger’s history and the chrome suspension on his first cars as a team owner. 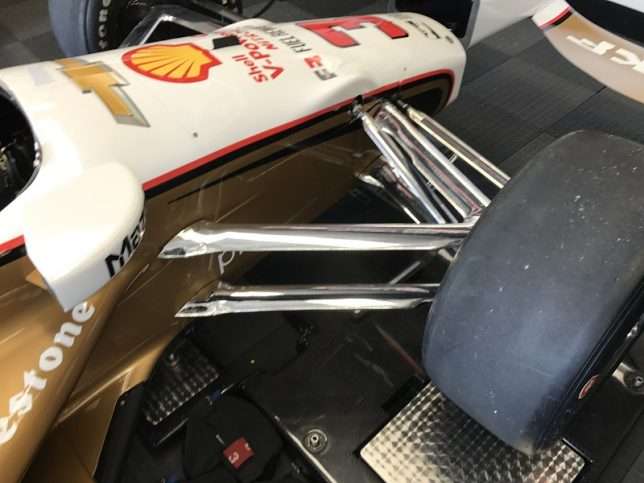 Penske may not be on pole but they have an interesting opportunity with five cars in this year’s Indy 500. Five cars driven by Simon Pagenaud, Josef Newgarden, Helio Castroneves, Will Power, and Juan Pablo Montoya. It’s a strong lineup and they have a reliable engine in the Chevy.

The relationship between Shell and Penske isn’t an arranged marriage; it is based on hard work and a passion for motorsport. The same reason that thousands of fans lumbered through the gates at 7am this morning to watch the action at IMS is the same passion that drives Penske and Shell to create the best possible lubricants they can for the five Chevy-powered Indycars in the stable. 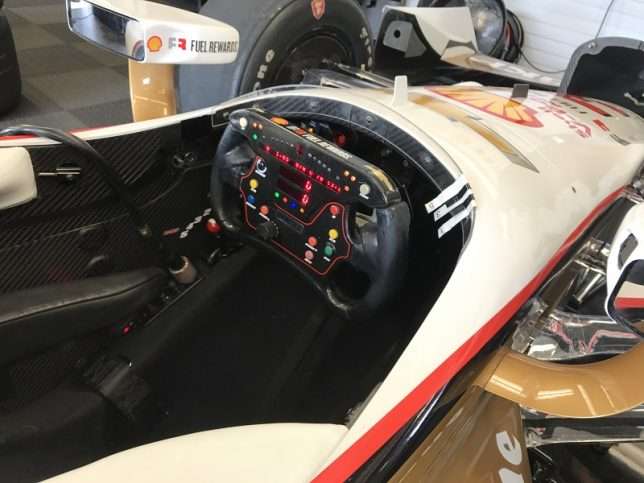 The relationship between the Indy 500 race fan is equally intriguing as I stood looking over turn 1 listening to the fans around me. In many ways, there is a bragging right that comes with the sharing of how many Indy 500’s the fans have attended. Our driver has been coming since 1967 and in my mind, that’s getting close to the top. Other fans said this is their first Indy 500 while others hovered in the 5-10 races they had attended. It isn’t a sacrifice, but it is a ritual nonetheless.

Alonso and the crowd

I’ll be honest, the buzz over Fernando Alonso’s presence is huge here. His pace on Friday yet another tangible example of just how good he is. Many people have asked me if he has a chance to win and I would argue…he certainly does but so do several others.

One of the “others” is Juan Pablo Montoya. Penske didn’t qualify as well as they may have wanted to but I suspect Montoya is going to be the rabbit on Sunday. His trim level seemed low and he was very quick in practice. This is a one-off ride for him so he has nothing to lose and everything to gain.

I suspect Ryan Hunter-Reay could be a dark horse in this mix and yet some may suggest that Scott Dixon is due his win from pole position. I would also love to see Max Chilton do well in his Ganassi ride or Alexander Rossi repeat his 100th anniversary performance.

In the end, as a Formula 1 guy, I am cheering for Alonso because I would love to see him join Jim Clark and Graham Hill as Indy 500 winners from F1. Jimmy Clark also skipped Monaco to go to Indy and it is rare air for those F1 legends who have won the title and then won the Indy 500. An epic story for sure.

Penske have me intrigued as to just how they will approach the race with the Honda’s seemingly quicker than last year but perhaps less reliable. Will Penske play a waiting game allowing attrition to run its course and then turn it up to take the win? If there is something Fernando is good at, it’s nursing and engine and perhaps his toils in F1 will pay dividends when it comes to indycar.

Previous article
Dario: Next time, Dixon…
Next article
The results are in, here’s what fans say they want from F1