As we’ve mentioned on our year-end episode of FBC indi, KVSH was all but defunct and ready to auction off their assets as not all of the team principals were interested in funding the effort out-of-pocket. KVSH had some good results in 2016 with Sebastian Bourdais scoring top 10 finishes in most races with a few top fives and one win at Detroit. [singlepic id=1675 w=300 h=200 float=left]While the team was never a threat for the championship, they were always in the hunt for strong finishes and the occasional race win. In all, it was a successful effort, but with Bourdais moving to Dale Coyne Racing, KVSH was left looking for a driver, preferably one who would bring enough cash to support the effort themselves.

It was rumored for a while that Carlin Racing was looking to expand their North American efforts to include the Verizon IndyCar Series as well as the Indy Lights Championship. Carlin has since dropped those plans and KVSH was again left looking for an influx of capital if the 2017 racing season was going to be a reality for the team. Enter the Venezuelan and former Formula 1 driver Pastor Maldonado.

Maldonado is, of course, famous for the mayhem he instigated on-track during his Formula 1 career (yes, I played Todd’s sound clip in my head, too), but keep in mind that he is also a grand prix winner. He did get to stand on the top step of the podium by winning the 2012 Spanish Grand Prix. 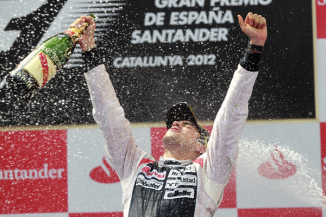 He was also the GP2 champion in 2010 and scored points in every one of his five seasons in Formula 1. That’s a feat that not every driver can claim. After spending 2016 on the sidelines, he is looking to get back into open-wheel racing, according to Motorsport.com, but here in North America in the Verizon IndyCar Series with KVSH. He was a guest of the team at the Iowa race in 2016, but at the time stated that he was still focused on a Formula 1 program. I suspect that even if this 2017 deal goes through, he will still look for opportunities in Formula 1 for 2018.

One thing that Maldonado is not especially keen on experiencing is oval racing. His interest in a seat at KVSH extends only to the eleven road and street circuits on the 2017 schedule. This leaves KVSH in a bind as finding a sponsor for an IndyCar effort often hinges upon the team and driver’s participation in the biggest motorsport event of the season, the Indianapolis 500 Mile Race. Although certainly diminished from its peak, over 300,000 people still converge on the town of Speedway, IN every Memorial Day Weekend and its TV ratings are decent. The exposure potential for a sponsor at the 500 often is the hinge pin of any season-long program. Thinking of Maldonado at Indianapolis, though, brings back memories of another Formula 1 driver that was, at times, a bit overly exuberant, Kevin Cogan. It could be 1982 all over again!

So the big question now is, “Does this rumored deal really have legs?” Even if this goes through, the team is still in a bind for the 500, although if Maldonado brings a big enough check, it could potentially help support a driver like Zach Veach who has some funding, but perhaps not enough for a full-season ride, and oval racing, especially at Indianapolis, is right in Zach’s wheelhouse! With a pairing such as this, I think the deal could work. Without it, and especially with no entry for the 500, I’m not sure that even with Maldonado’s bag of cash, that it would work out in favour of the team. It’s definitely something to keep an eye on as the season opener at the Streets of St. Petersburg approaches.

How could Maldonado have a bag of cash? Venezuela is bankrupt.

That’s a good question. He obviously has some level of funding, or KV wouldn’t even be interested, but it can’t be anywhere near the level he enjoyed while at Williams and Renault. I think the real question here is whether what he does have is enough to cover a second young driver for the ovals. Keep in mind that he would need significantly less funds for an IndyCar effort than for a Formula 1 effort. Even as broke as Venezuela is, they do still have a lot of oil, and crude prices have been on the rise, having sustained a… Read more »

Thats the thing when nations have complete economic collapse or despots and dictators get deposed, the cash always manages to be syphoned off to somewhere the citizens never see again.

He had a carbon fibre repair business on the side, made a fortune ;-)

Where’s my friend Baziz, the Number 1 Maldonado fan?
This is great news! Somehow Mercedes left Maldo off the list of possibilities for Hamilton’s new team mate (I’m guessing Hamilton vetoed the idea, knowing he’d be out qualified, out raced, and out cooled), so it’s good to know that there is a chance that 2017 open wheeled racing won’t be Maldonado free.
I’m not sure why he wouldn’t be keen on the oval events, a man with his courage and commitment could feature well in that discipline, or at least feature in the ‘most spectacular crash’ reels.

Haha! Really hope to see him race Indycars! Of course was hoping for him to secure a F1 seat but most important for him is to start racing and winning again. Maybe he’ll drive the ovals later if there is success on the road courses and he’d get some testing on ovals.

Previous articleCambered Corner — Jackie Ding: F4 US driver for Group A Racing
Next articleFBC Downshift #78- Ian James on the 24 Hours of Daytona