Drivers will tell you that a qualifying run fr the Indianapolis 500 Mile Race is the most difficult ten miles of driving. The need to be millimeter-perfect through four slightly different corners after an entry speed close to 250 miles per hour takes focus and reactions of superhuman levels. Add in that to earn the pole for this historic race, a driver has to endure this stress twice: Once Saturday and again on Sunday.

The Verizon IndyCar Series has adapted their version of knockout qualifying to the Indianapolis 500 by implementing the Fast Nine. The way it works is all 33 drivers are allowed qualifying runs on Saturday, and if their best run is one of the nine fastest, they will make one run for pole on Sunday. The other 21 drivers also make a single qualifying run Sunday to set their position on the grid. It seems superfluous to make two qualification run, but historically, the first day of qualifying (which used to last an entire week!) was known as “Bump Day”. Back in its heyday, the Indy 500 would attract more entrants than grid positions, so non-qualifiers were bumped from the field. With only 33 entrants, there’s no cars to bump out, so yesterday’s runs were to set the Fast Nine and determine the order of qualification runs.

Before qualifications, we learned that Sebastien Bourdais had surgeries to repair his broken him and pelvic fractures and they were successful. It’s not surprising that he will be out of the car for the rest of the season, destroying any hope of a championship run this year. James Davidson was announced to replace him in the Dale Coyne No. 19 for the Indianapolis 500, but no information about the remainder of the season. A substitute for Bourdais’ substitute at the 24h du Le Mans has not been named, although John Dagys reports that Tony Kanaan is likely. 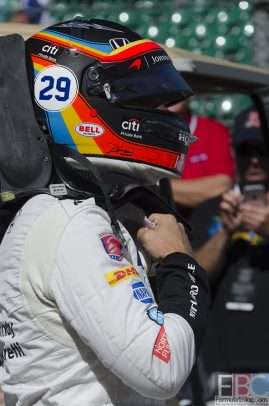 The other item of note is involves our favorite Spanish rookie, Fernando Alonso. Before qualifications, the car was seen billowing smoke from their berth in Gasoline Alley. By the time of the Day 2 broadcast on WatchESPN, the mad thrash to replace Alonso’s lump was underway while the jokes about feeling right at home took over social media. Alonso’s issues come after Honda imposed limitations on the number of laps teams put on their engines in hopes of maintaining reliability. Considering that he’s been in every session possible to gain seat time, they make have worn out a Honda motor.

The first group set grid positions 10-33. Ryan Hunter-Reay seemed to be channeling Sebastien Bourdais, as his first two laps were very similar to Bourdais’ before he crashed. He was able to keep his run in check, as well as blazing fast, setting the fastest speed of the weekend to that point, with a 4-lap average of 231.442 mph. Several drivers had contact with the wall on the exit of Turn 2. Charlie Kimball, Max Chilton and Jack Harvey all left scuff marks on the SAFER barrier, though all went on to complete their run.

By the time the Fast Nine group started, the McLaren Honda Andretti Autosport crew (with the help of the entire Andretti Autosport organization!) were able to get a new engine into the No. 29 car and in line to make their Fast Nine Qualifying run. The car was definitely fast, picking up speed on the first three of four qualifying laps. His run was third of nine and fastest of the group so far, but he had to wait for everyone qualifying after him. 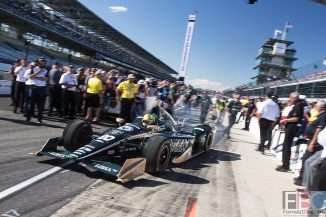 Six runs of sheer anxiety awaited Alonso. Will Power was slower (like the rest of the Penske squad), but former F1 gridmate and reigning Indianapolis 500 Champion Alexander Rossi was faster this time, knocking Alonso’s speed off the top of the scoring pylon. JR Hildebrand had a fast (although not pole-worthy) run and almost added his scuff on the wall exiting Turn 2. Then there was Scott Dixon, who put up the only laps faster than 232mph all weekend, only his fourth lap dropping below the 232 mark. Sato followed up with coparable pace, but not the same consistency. He was still fast enough to push Alonso off the front row, leaving one final qualifier: 2-time polesitter and team owner Ed Carpenter. Ed wasn’t able to keep the speed as high as Dixie, but his effort was good enough to place him in the middle of Row 1.

The complete grid of 33 can be found here: http://www.indianapolismotorspeedway.com/events/indy500/event-info/live-grid

I thought it was going to be a long time before I heard the phrase “Alexander Rossi outqualified Fernando Alonso.” Kudos to both, though!

Great report thanks Doug. Work today so no chance for me to watch the fast 9 qualifying, and no replay on ESPN this evening.
After Bourdais accident yesterday I’d imagine it would have been quite tense watching the runs today. It must take superhuman skill and testicular fortitude to blitz around Indy at over 370kph. I’m glad everyone made it through safely.
Great work by the flying kiwi Scott Dixon, but still only second mention on the motorsports section of the news, after news of a Van Gisbergen’s win in Aussie Supercars.

Don’t thank me. This is John’s work. I’m just the camera guy here. John and Tom have been handling the lion’s share of the writing for the 500.

Fair enough, thanks for clarifying that.
Great report John, No thanks to you Doug!

First up really sorry to hear about Seb B and his accident, lets hope that that he has a speedy road to recovery. Great work by Scott Dixon (a fellow New Zealander… however, I can’t drive race cars for crap) to get pole as well as hearing him say that he thinks the Seb B would have got pole if he hadn’t put it in the wall. I really worry for Alonso when I hear Scott Dixon say that he thought that his engineers had taken too much out of the wings only to be told by his race engineers… Read more »

Yayyy, ESPN2 has the replay on!
And the speeds are displayed in kph.
How do the Indy tyres (tires) work? No sign of tyre warmers, no weaving around to warm them up and get the balance, and the circuit isn’t ringed with marbles.

That’s the best, maybe only good thing, about ESPN. They post replays immediately. Their app could use work, but they give the content right away.

IC doesn’t allow tire warmers. I think the running into qualifying speed will warm the sufficiently without needing weaving.

Thanks Cogi, I guess the tyres don’t need lots of preheating and weaving to get them into their operating range, because they must generate some massive lateral loads around those corners at 370kph.
Do you know what g loads they experience around the corners?