IndyCar – JPM says Dixon had a [crap] season, but did he?

The Verizon IndyCar Series finale at Sonoma Raceway, home track of The International, was certainly drama-filled. The biggest story of the race was the surge of Scott Dixon from third in the points at the waiving of the green flag to being the 2015 champion at the checkered flag. Juan Pablo Montoya, who had lead the championship the entire season until the end of the final race, was understandably bitter. Running into his teammate and primary championship rival certainly didn’t do his championship aspirations any favours and is likely the event that permitted Dixon to make the leap from third to first. Rather than recognizing this enormous mistake as the primary reason for the championship slipping away, Montoya instead chose to lash out at Dixon and the double-points races this season, which included the season finale at Sonoma.

“Dixon had a shit season all year and had one good race, and we paid the penalty.” — Juan Pablo Montoya, #2 Penske Racing

While I agree with Montoya’s disdain for double-points races, I disagree that Dixon had a poor season singularly salvaged by his win this past Sunday. Double-points races have always seemed gimmicky, and without the double-points races this season, Montoya would have edged out Dixon by six points, 470 to 476 with all bonus points included. He also had a higher average finishing position than Dixon, 6.9 to 7.7. What are not included in this hypothetical, though, are the points from qualifications for the Indianapolis 500 Mile Race. INDYCAR elected to disregard points for qualifying after the regulations were changed literally at the 11th hour. Include the 500 qualification points, and suddenly, you have a very different picture; Dixon wins 520 to 491. 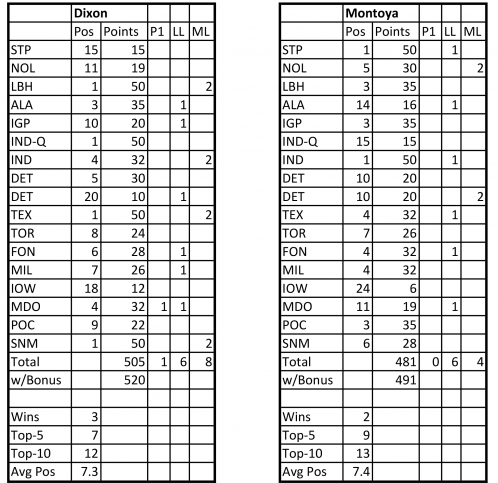 All this playing about with points and what-ifs is, of course, merely speculation and Monday morning quarterbacking, but it does illustrate a point. A driver who earned no pole positions during active qualifying, only won two races, and took out his own teammate during the season finale has no business saying that a driver who won three pole positions and won three races, including the season finale, and led the most laps in four races had a “shit season.” We can discuss the pros and cons of double-points races and other championship-spicing gimmicks, if you wish, but Dixon earned his championship under the rules that were in place at the beginning of the season, and looked classy doing it.

This was JPM’s championship to loose. And, unfortunately he lost it. Simple as that . . . What seemed to be playing out, whether it was real or not, was the CGR cars working more as a team than the Penski cars. It just appeared that the rest of the CGR cars had Dixon’s back throughout the race . . . especially towards the end. I think I even heard the commentators mention this during the broadcast. Whether it was true or not, it did certainly seem that way. The Penski organization just didn’t seem like they had their act… Read more »

My observation wasn’t directed at what happened during the year, only this last race. It just “seemed” like they didn’t have their act together yesterday. But, my observation could certainly be wrong. It could have just been the way the race unfolded. Penski is a top notch organization and certainly worthy of the championship.

Penske is a top organisation, of course. I’d argue as a team however, Penske missed a lot of opportunities this year. Penske cars started on pole position at thirteen of the sixteen races this season, yet managed to score just three victories throughout the season. For a team that dominant in qualifying, that is a slightly disappointing statistic in my view. Of course it doesn’t tell the whole story of why the team missed out on those results, some of what happened had nothing to do with Penske’s issues rather things falling against them but it would of made the… Read more »

Teehee! Go Kiwi :-)
I’m not an Indy follower, but its always good to see Scott Dixon do well, and hard to be sympathetic when JPM throws his toys out like this.

JPM is a jerk

jpm didnt complain when he won the title on a tie break…im sure franchitti wasn’t happy about that either.