Simon Pagenaud’s championship-winning season in the Verizon IndyCar Series was one of quiet domination. After Power’s DNF at Watkins Glen International, Pagenaud took a 43-point lead over his Team Penske teammate, Will Power, to the series finale at Sonoma Raceway. During qualifying, Simon made it clear that he wasn’t going to simply cruise to an easy mid-pack finish. He took pole position for Sunday’s race by 0.1569 seconds, while Power could only manage to qualify P4. Team Penske locked out the front two rows with Helio Castroneves starting in P2 and Juan Pablo Montoya starting right behind Pagenaud and along side Power in P3. From the drop of the green flag, Pagenaud showed dominant pace, immediately pulling a gap multi-second gap on the rest of the field. Power never had anything for the championship leader early in the race, although he did gain positions and was P2 after a great pit stop by his crew and excellent in and out laps allowed him to overtake Castroneves. That success was short lived as Power would suffer a failed clutch control unit on Lap 36, ending his quest for a second series championship. Meanwhile, Pagenaud continued to run flawless laps while managing his tires and fuel easily taking the victory and holding off a charging Graham Rahal.

“It’s unbelievable. I think I will realize it more tomorrow. What a race! There is so much emotion right now, to be honest, I don’t know if you can see it. I can’t find the words. My whole career has been about this, about today and getting to this point and to this level. When you can perform 100 percent under pressure like this is amazing. It’s such a good thing. It’s me winning but it’s the whole team, the 22 team and Team Penske.” — Simon Pagenaud, No. 22 Team Penske

The entire 2016 season saw the charismatic Frenchman dominate one race after another, logging five wins, ten top-fives, and twelve top-tens throughout the sixteen-race season with only a single DNF at Pocono. This was a magical season for Simon, and a redemptive one after underperforming in 2015.

Simon was a young up-and-coming driver when he entered the Champ Car World Series in 2007 with Team Australia and teammate Will Power. He had just won the 2006 Formula Atlantics championship and was looking to make his mark in North American open-wheel racing when in 2008, it all came to an abrupt halt. The unification of the Champ Car World Series and the Indy Racing League left many CCWS drivers and teams out in the cold, including Pagenaud.

In 2008, Simon moved to the world of endurance prototype sports car racing in both the American and European Le Mans Series which culminated in a 2010 ALMS LMP1 championship with Patrón Highcroft Racing, winning four of the nine races that year. 2011 was a journeyman year for the Frenchman, competing in the Continental Tire Sports Car Challenge, the International V8 Supercars Championship, the European Le Mans Series including the 24 Hours of LeMans, and three IndyCar races. It was not an unsuccessful year, scoring a race win in LMP1 Le Mans Series, and placing second at the 24 Hours of Le Mans with the LMP1 Peugeot. 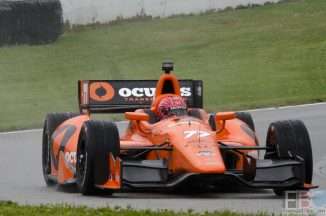 Simon returned to racing single-seat, open-wheel cars full-time in 2012 when he joined the fledgling Schmidt-Hamilton Motorsport team in the Verizon IndyCar Series. He found immediate success, scoring four podium finishes on his way to earning the Rookie of the Year title and finishing 5th in the championship. In his sophomore season, he improved even more, getting his and the team’s first IndyCar race wins and finishing 3rd in the championship behind Helio Castroneves and Scott Dixon. He continued to show skill and cunning in his last year with Sam Schmidt’s outfit banking two more race wins and achieving another top-five championship season finish.

[singlepic id=38 w=300 h=200 float=right]Pagenaud’s big break came in 2015 when he got the call from Rodger Penske to join the juggernaut team as their fourth driver. Unfortunately, 2015 was not the season that either he or the rest of the racing community expected. He struggled all season long, managing only two podium finishes, third place at both Detroit and Mid-Ohio, and ending the year back in 11th spot in the championship. Ovals seemed especially challenging for the as the best he could manage was a seventh place finish at Pocono.

All that changed for the 2016 season. Pagenaud opened the year with a pair of second-place finishes on the Streets of St. Petersburg and at Phoenix International Raceway. He stepped up the pressure on the rest of the grin with a string of three victories, first at the natural terrain road course at Barber Motorsports Park in Birmingham, AL, then on the streets of Long Beach, and opening the Month of May on the infield road course at the Indianapolis Motor Speedway.

While the beginning of the Month of May started great, the rest of the month did not go as planned. Simon only managed to qualify eighth for the 100th running of the Indianapolis 500 Mile Race, and ended up 19th at the end of Race Day. Detroit looked to continue the tribulations for the would-be champion as he finished Race 1 out of the top-10 after securing the pole position. Things changed for Race 2 as he found his way back to the podium, finishing right behind the winner, Will Power.

The victory in Detroit’s Race 2 marked the beginning of a resurgence for Power as he would go on a six-race run winning four races and finishing in second in the other two. Pagenaud took the victory at Mid-Ohio, but an encounter with the walls at Pocono cancelled out the hard work in Ohio.

With three race remaining, Pagnenaud had his work cut out for him. Neither he nor Power had a stellar race at Texas Motor Speedway, but neither was disastrous, either. The fate of the championship changed dramatically at Watkins Glen International. As Pagenaud languished outside the top five, it seemed that Power had an opportunity to gain serious ground on the championship leader. As Power exited Turn 4 on Lap 39, his rear tire clipped the front wing of a fast charging Charlie Kimball tossing both drivers into the grass, and Power into the wall, ending his race.

The DNF by Power at Watkins Glen gave Pagenaud a 43-point lead going into the season finale at Sonoma. Pagenaud put an exclamation point on an excellent season by taking the pole position and leading the race from flag to flag, pit exchanges notwithstanding. It was a perfect way to end an amazing championship season for Simon, a season of quiet domination.

His pass on Power at Mid Ohio was the best pass i’ve seen in a long time.
Power was unlucky with reliability and took the excitement out of the last race.