Simon Pagenaud, driver of the #22 Team Penske machine, extends his championship lead this afternoon with another victory in the 2016 Verizon IndyCar Series championship at the Mid-Ohio Sports Car course. 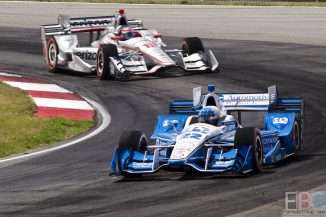 The race started without incident with Pagenaud pulling out a strong lead over his teammate, Will Power, early in the race.  The peace did not last as the first caution came out on Lap 15 with Target Chip Ganassi Racing’s Scott Dixon, tipped by many to win the race even despite a poor qualifying, had a coming-together with Team Penske’s Helio Castroneves under controversial circumstances.

“Helio (Castroneves) was coming out of the pits on the pit exchange and we were trying to go off sequence. He was off pace and we caught him on the exit of Turn 1. I got alongside him and he kept edging me over until I just had nowhere to go. I braked when I was alongside him and then he just turned in. Had we had a little more room I think we could have gotten through there just fine. It was definitely an aggressive move but I should have known better trying that with Helio. It usually ends like this with him.” — Scott Dixon, No. 9 Target Chip Ganassi Racing Chevrolet

The fallout from the incident was an entirely broken front suspension from Dixon’s Target Chip Ganassi Racing Chevrolet, leading to an extended pit stay and elimination from any chance of scoring more than the minimum points in the race. He would return to the track late in the race to gain some engine mileage before eventually retiring.  Helio, meanwhile, had some light damage to the rear of his Penske Chevrolet, however he would run off course damaging his race further within laps of the contact with Dixon.

Will Power had contact with Josef Newgarden which didn’t result in a penalty for the Penske driver.  Newgarden vigorously expressed his displeasure at the lack of a penalty, given the opposite had happened in Toronto and Newgarden was handed the penalty on that occasion.

The caution saw most teams hit pit road, whilst Montoya and Andretti took on a different strategy, Marco having started at the rear of the field suddenly found himself at the front. The lead was short-lived, though, with both coming down pit road for fuel and tires seven laps later. 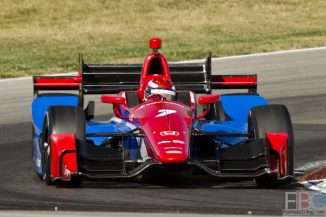 This allowed Russian Mikhail Aleshin to dominate the middle part of the race. The 2010 Renault 3.5 Champion and 2016 Daytona 24 Hours polesitter put on a masterclass to the field for Schmidt Peterson Motorsports, unfortunately it wasn’t to last.

On Lap 61, AJ Foyt Racing’s Jack Hawksworth went off heavy in T1.  Fortunately, he was able to walk away from the car unaided. The pit stops which followed as a result of the full course caution for Hawksworth’s off, however, was the undoing for Aleshin’s race.

The team let Mikhail go, not noticing that Newgarden would be entering the pit stall, two stalls down. As a result, it was an unsafe release with Aleshin colliding with Newgarden in addition to making contact with a pit crew member of Will Power’s. The crew member was checked and cleared by IndyCar’s medical centre.

“The car was amazing. The team did a fantastic job to bring the No. 7 SMP Racing car up to speed. No one was really faster than we were. I felt quite competitive up there in the front and I wasn’t pushing like crazy because I was also saving fuel. Everything was going proper, perfect and I was saving fuel but at the same time, I was the fastest car on the track so obviously the car was pretty good. I think the incident (in the pits with the No. 21 car) was unfortunate. I don’t want to discuss it though. I want to just say that sometimes these things happen in the race and we’re ready to win but we just got a little bit unlucky today.” — Mikhail Aleshin, No. 7 SMP Racing Schmidt Peterson Honda 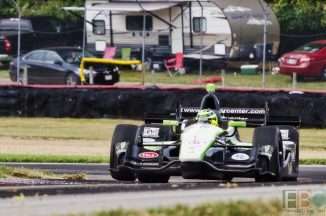 Conor Daly was the main benefactor of this caution, coming in five laps before the caution and therefore taking the lead. Unfortunately for Daly, whilst he gained through everyone else pitting five laps after him track position, it meant the fuel numbers simply didn’t add up later toward the end of the race.

The restart saw Power and Pagenaud in a fantastic duel for second behind Daly, with Pagenaud ultimately winning out between the two in what was, in my view, the move of the race.

In the closing stages, Takuma Sato who had sat in third overall for most of the race, had a podium cruelly taken away from him, after Sebastian Bourdais ran into the rear of the Japanese driver’s ABC Supply AJ Foyt Racing Honda, and eliminating Bourdais from the race and sending Sato far back in the running order.

Daly led until seven laps from the end, when the advantage he had gained earlier, meant he had to come down pit road for fuel, therefore allowing Pagenaud to claim the win, 4.4 seconds over Power with several cars running out of fuel on the cool down.

“I can’t feel anything right now so it’s all good. My back was fine all race, thanks to INDYCAR Medical. Whew, that was a race there, that was fun. It was an awesome battle with Will (Power) there. I knew that was my chance on that restart, it was time to go. It was a pretty interesting lap, fun driving like that. That’s racing. It was fair, it was clean, it was hard racing and I’m just glad I won, really. The PPG Chevrolet was really good today so when it was time to push it was easy to lay down some fast laps. The red Firestone tires were amazing today on the car. I just pushed as hard as we could and here we are. It’s awesome. Four wins this year.” — Simon Pagenaud, No. 22 PPG Automotive Refinish Team Penske Chevrolet

For a full analysis of the race, please tune in to the next FBC Indi Podcast, hosted by Doug Patterson with myself and John Olsakovsky as co-hosts.