IndyCar — Penske lock out the front row at Mid-Ohio

In a session which saw teams gamble on the changing weather conditions, Simon Pagenaud placed his #22 Penske Chevrolet on pole position ahead of teammate Will Power at the Mid-Ohio Sports Car Course. 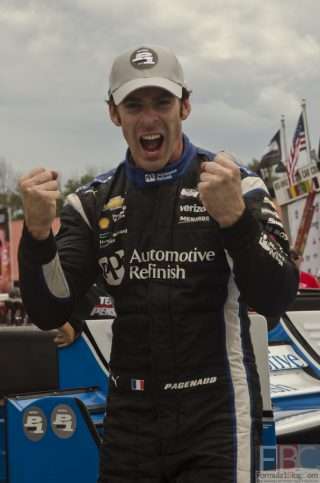 “It was a tricky qualifying for sure, especially Q2 because we were out there and all of a sudden there were some drops in Turn 4. It got slippery, a little slippery, but not enough to really pit. There was a lot of communication with the time extension; is this going to hold or is it going to keep raining a lot. They said just stay on track and we’ll see the last two laps if you can go for it. And they said, just go for it. I didn’t see any drops, so I went. But it was a bit sketchy for sure.

Q3 was awesome with Will. What a battle. The car was just — the PPG car was really hooked up today. Thanks to Team Penske. They give us the best equipment out there, so congrats to all of you guys for being in the Fast Six.” — Simon Pagenaud, #22 Team Penske

The first group of qualifying phase one saw little surprises. Andretti Autosport’s woes continued for Marco Andretti and Carlos Munoz, both failing to make it through to phase 2, whilst Juan Pablo Montoya made the cut in the dying seconds of the session.

RC Enerson looked promising early in this group on his Indycar debut for Dale Coyne Racing before fading later in the session. Teammate Conor Daly meanwhile continued a tough weekend at Mid Ohio by placing the car on the back row of the grid.

The rain played some minor havoc in phase two, with rain failing in turns four and five with a few minutes of the session to go. Teams took the gamble on whether to go for another run or hope the rain would consolidate their qualifying positions.

Schmidt Peterson Motorsports held positions one and two within the session, Hinchcliffe from Aleshin. The team took the gamble not to go for a second run and unfortunately it didn’t work out for either of their drivers, both failing as a result to make the Firestone Fast Six. The other surprise from the session was Scott Dixon missing out on the fast six, given his domination of Mid Ohio in recent years.

The race is on CNBC tomorrow.