We’re going to try a new regular feature here at FBC as part of our expanding coverage of the Verizon IndyCar Series called “Three Up, Three Down.” After each race, we will post our thoughts on three of the positive (three up) and three not-so-positive (three down) aspects of the race weekend. First up is the Firestone 600 last Saturday at the Texas Motor Speedway.

Great racing with out the packs.
Eddie Gossage complained prior to the event about the lack of pack racing removing the excitement from the race at his speedway, but the action was anything but boring last Saturday night. There was lots of action throughout the grid, but especially at the front with multiple lead changes made by passes on track, not in the pits.

Honda becoming more competitive.
The Chevrolet lump has been superior to Honda’s from the beginning, but the difference in aerodynamic design philosophies has exacerbated the issue this season. While Honda has piled elements on top of more elements, Chevrolet has chosen a more minimalist mindset. This aligns well with one of my guiding principles from designer Antoine de Saint-Exupery, “A designer knows he has achieved perfection not when there is nothing left to add, but when there is nothing left to take away.” Although Honda has been struggling this year, they’re gaining ground. They showed strong during the race in spite of the Chevrolet powerhouses of Team Penske and Chip Gannasi Racing surging at the end to secure the top four positions. Marco Andretti, and teammate Carlos Muñoz were strong all race long.

Clean racing and no upside down cars.
Perhaps a disappointment to the NASCAR crowd who are always looking for “The Big One”, but Saturday’s race was clean flag-to-flag. There was a yellow for a debris caution about a third of the way through the race, but there was no car-on-car or car-on-wall violence. This is not especially unusual at Texas. With it’s high-banking, there are several viable racing lines around the Texas Motor Speedway offering sufficient grip to make the cars easier to manage than they were at Indianapolis.

Where were all the people?
It used to be that the Texas Motor Speedway attendance would top 100,000 fans, but there were 50,000 fans there on Saturday, I’m a monkey’s uncle! Race attendance is still strong at road and street circuits, but oval attendance has been waning in recent years. The constant refrain from the die-hard IndyCar enthusiasts has been for more oval races on the schedule, but ticket sales at the left-turn-only events continue to underperform. I’m not sure what to make of this. The racing since the introduction of the DW12 has been pretty darn good, but the fans just aren’t opening their wallets to attend the races. I might write an op-ed piece on this topic later.

The Lap 83 phantom debris caution.
Back in 2010, I remember watching Ryan Briscoe drive his Team Penske machine to a dominant victory at the Texas Motor Speedway. He had lapped up to P5, and I was really hoping he’d be able to lap the entire field before the end of the race. Unfortunately, as happened last Saturday, someone saw a hot dog wrapper and threw a debris caution. The caution last Saturday was the only interruption to the the green-flag racing and it didn’t really disrupt the action, although it did appear unnecessary. Perhaps someone who was there can verify the presence of debris?

OMG it was hot! 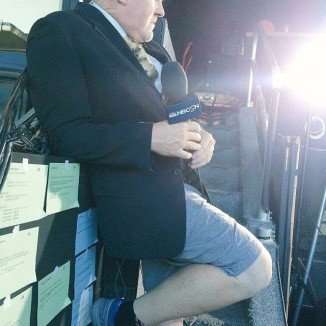 Texas in June, even early June, is always hot. I’ve been to this race a few times, and during the afternoon is it nearly unbearable! By the time the race begins, however, the temperatures moderate to a tolerable level. This year, a good friend of mine who was present texted that it was still in the 90s during the race. That’s just brutal. Even Paul Tracy, who was working as a commentator for NBCSN, gave up on the lower-half of his professional garb in favour of some cool and stylish shorts.

So what was your take on the second oval race of the season? What did YOU like and dislike about the event?