During testing and in the opening two rounds on the Streets of St. Petersburg, Carlin Racing and their primary driver Ed Jones looked unstoppable. Jack Harvey, driver of the #42 machine for Schmidt Peterson Motorsports, had been looking at Jones’s gearbox, finishing P2 in both races at St. Pete. Well, I say looking at the gearbox, but the view was pretty distant as Jones cleared his closest rival by over three seconds in Race #1 and by more than nine seconds in Race #2.

Jack Harvey, dissatisfied with his distant second place finishes, arrived at Long Beach ready to take charge of the event and close the gap in the championship. The practice sessions were a struggle for the British Indy Lights veteran, but during qualifying it all came together. On his last lap, Harvey shattered the previous Indy Lights track record at Long Beach by more than a second and took the pole position.

Ed Jones and his teammate, Max Chilton, would not qualify well compared to their previous efforts. Jones could only manage a P4 qualifying position while Chilton would start near the rear in P10. By contrast, the two Juncos Racing drivers, Spencer Pigot and Kyle Kaiser, qualified extremely well, slotting up in P2 and P3, respectively. Juncos has long been a strong team in Pro Mazda, but it has taken them a bit to come to grips with the new Indy Lights chassis. The team seems to have sorted out some issues and discovered how to extract more pace from the car. 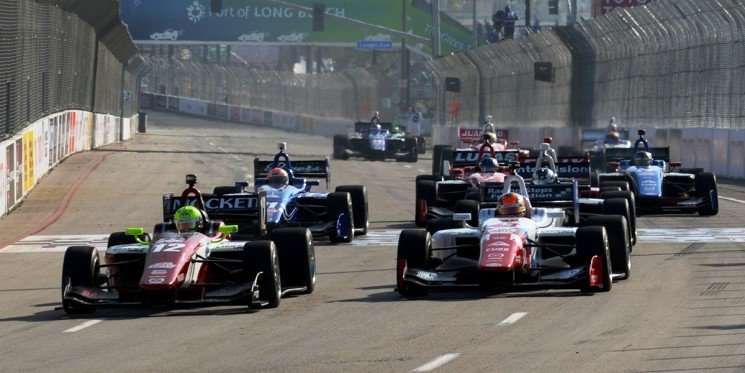 Everything changed as the field charged into Turn 1 for the first time. Kyle Kaiser missed his brake point and fully mounted the leader, Jack Harvey, tossing them both into the tires. Spencer had to take evasive action and lost several positions as a result. Ed Jones was the big beneficiary as he skated through the chaos to emerge in the lead position. Felix Serrales, driver of the #4 Belardi Auto Racing machine, also made big gains in that Turn 1 kerfuffle, turning his P5 starting position into a P2 as the field ran down into the Fountain Turn.

RC Enerson piloted his #7 Schmidt Peterson Motorsports racer up to P3 after starting back in P6. Enerson has a lot of experience in the Mazda Road to Indy, but as a USF2000 driver. This is his first season in IndyLights, and he’s shown that he’s up to the challenge.

After their Turn 1 contact, Kaiser’s day was done, but Harvey was able to limp back to the pits for a new rear wing and rejoin the fight. Being multiple laps down in a sprint race, he was no longer a threat for scoring a podium finish, but in order to score points for the race, a driver must complete at least half of the race laps. This meant trying to complete at least 23 of the scheduled 45 laps. He would only successfully negotiate 15 race laps after he carried too much speed into Turn 8 in an attempt to overtake Belardi Auto Racing’s Juan Piedrahita. The mistake put both of them into the tires and ended their day.

Spencer Pigot recovered from his Lap 1 setback and made his way back to P2 and hounded the gearbox of Ed Jones for the remainder of the race. Jones would keep Pigot at bay and take his third win of the season, leaving him undefeated on the season and with a dominant lead in the championship. 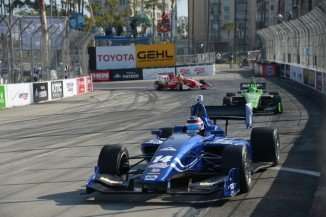 “It was a close race and the tyres were starting to go off and I think I touched the wall a couple of times but I had to push that hard as Spencer [Pigot] was so close behind me. You can’t always be fastest at every circuit but you’ve got to be ready to make the most of every opportunity and I think we did that today.” — Ed Jones, #11 Carlin Racing

As the series heads to Barber Motorsports Park for Rounds 4 and 5 next weekend, Ed Jones leads Spencer Pigot in the championship by 26 points, 95 to 69, as Jack Harvey falls back to third with 51 points. Can the resurgent Juncos Racing duo or a recovering Jack Harvey bring the fight to Carlin at Barber, or will Jones continue his domination?