Editor’s note: Earlier this year, we interviewed our own Paul Charlsey about the brand new SCCA Pro Formula 4 US Championship series on The Cambered Corner. We followed up with an interview with Jonathan Scarallo, Team Manager for Group-A Racing who will be entering the new Formula 4 series as a compliment to their existing SCCA Pro Formula Lites program. During the 2016 season, one of Group-A Racing’s Formula 4 drivers, Raphael Forcier, will be providing a driver’s blog for us, giving us insight into the junior formula scene. 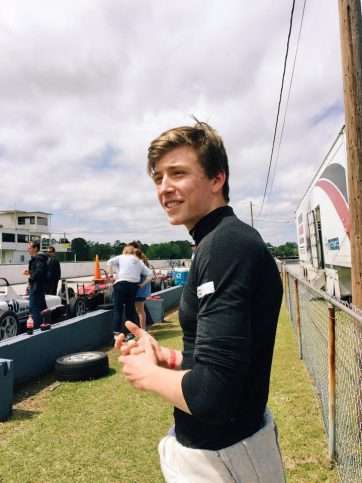 My name is Raphael, and I am a 16 year old from Montréal, Canada. I do a variety of sports including tennis, wake boarding and cycling. I am also a cinematic enthusiast and have grown up in a musical family, playing guitar since I was six. My first interest for speed started around four years old, when I was old enough to ride a bike. I went on to race dirt bikes until I was 12, when my mom decided to sell all my equipment after an incident. My ambition was however still there and stronger than ever, so I convinced my parents to let me try a go kart instead since the karting track was only a few minutes away from the dirt bike track. I made my karting debut at 13 years old at Max karting by lapping and doing a couple of club races. The following year, we planned to do one karting race and see how it goes, and on my very first race as my parents were expecting me to get lapped, I ended up 8th and completely fell in love with racing. Before we knew it, we were doing a whole Eastern Canadian Karting Championship season and I was getting top-five finishes constantly. I then got enrolled in the Skip Barber Winter Series, earning a win and 6 podium finishes. For this year’s US F4 Championship there will be a lot of competition with very skilled drivers which is going to make it really interesting and challenging. I know that with great collaboration work with Group-A Racing team we will be able to distinguish ourselves.

You can also follow Group-A Racing through the following:

Tsunoda apologizes for comments about…
14 hours ago by Buke
The Japanese are usually known for their politeness and restraint. ...

TPF Podcast Mailbag
4 days ago by Dan
Perez getting Driver of the Day was really odd at ...