The has been a lot of discussion this year about whether Lance Stroll deserves his seat in the Williams team, especially as he is so well funded.  He has now scored his first points in F1, so perhaps that will begin to appease the critics.  Either way, the team seem willing to give him time to develop, and he isn’t under any immediate pressure.  If we look at the drivers who have started a Grand Prix this year, and compare the results of the first seven races we can see that Stroll has performed better than half the drivers competing this year: 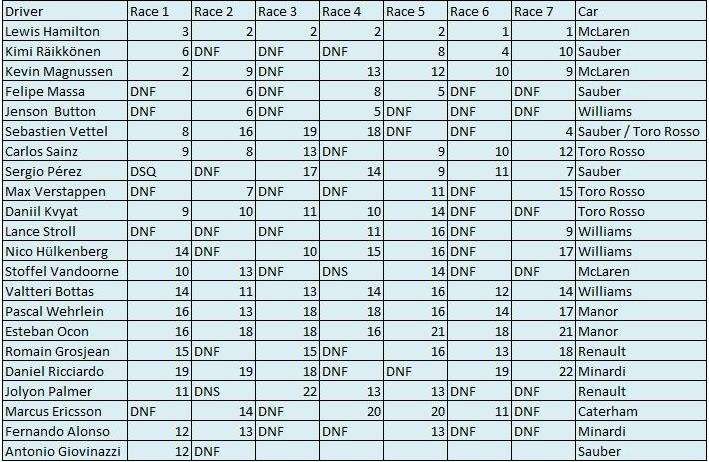 It isn’t really fair to include Giovinazzi in this list, as he has only competed in two races, so Stroll comes eleventh in a field of 21 remaining drivers (exactly halfway).  What is surprising is that Alonso is at the very bottom with four non finishes and no points from the remaining three races.  Thirteen of the drivers managed to score points in their first seven races (using the current points system 25, 18, 15, 12, 10, 8, 6, 4, 2, 1) with Hamilton way out in front.  This is due to a couple of factors, he was well prepared having competed in six seasons of single seater racing before reaching F1 (three years of Formula Renault, two years of Formula 3 and a year of GP2) and a significant mileage in testing in a current F1 car before entering with a front running team capable of winning races and the drivers championship.  In comparison, most of the other drivers in the field had much less testing: 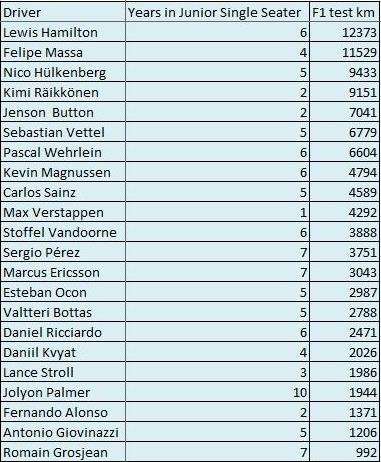 Standing out near the bottom of this table is Alonso, with only two seasons of junior single seaters and much less F1 testing than Hamilton, it is no surprise that he wasn’t able to drag the Minardi into the points in his first seven races.  Of the world champions in the list, Alonso is joined by Räikkönen and Button in only having two seasons of junior single seater racing once they had left karting before starting F1.  Vettel on the other hand had five seasons, this may explain why Hamilton and Vettel were able to win their first titles much earlier in their F1 careers.  Verstappen stands out as making the most rapid progress to F1, but I don’t think he can be used as an example of the normal career path for successful drivers.

Stroll though has had a relatively short junior career, making rapid progress to get to F1, and with limited teesting in current machinery, it isn’t really that surprising that he is struggling to match his vastly more experienced team mate.  I think however that Palmer should be the driver most concerned for his position, as he has more experience than Stroll, a car which is nearly as competitive (Renault have 18 points to Williams’ 22) and has yet to finish in the points this season.

Stroll has made a slow start to his F1 career, but has made a better start than half the current field, so should be given the rest of the season to see how he improves before judgement is made.  What do you think?

I’d also want to know how many of those DNFs were due to mechanical failure vs. accident.

The data is available, but not who was responsible for the accident.

As long as he doesn’t gain a reputation for taking out other drivers, he should be left alone to develop his craft.

How often does it happen that a talented driver is unable to attract sponsorship? The layman would suppose that if you are truly gifted, teams and sponsors would pay attention to you. 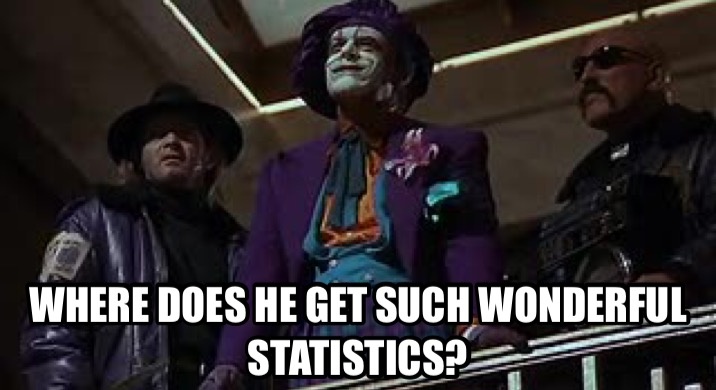 The Forix database is the source.

Dave you missed Williams other famous big budget bringer – Pastor Maldonado! According to Wikipedia his first 7 races were; DNF, DNF, 18, 17, 15, 18, DNF. And Pastor went on to win a race, but more importantly the budget he brought helped to fund Williams back to competitiveness. Lance seems to be doing better than that, and between the money he brings and the deal Williams struck in giving up Bottas to Mercedes, plus getting Paddy Lowe in, I’m expecting great things from Williams in the next few seasons. Possibly Williams will get a really quick and established driver… Read more »

The two team mates who are in the table are Sainz and Verstappen. Do the results from the first seven races indicate which one is the better driver, or do they better represent which is the more experienced driver at that point?

Good point Dave, I think the jury is still out on which is the better driver out of Sainz and Verstappen. Verstappen got the promotion to RBR, but over their first 7 races you’d say Sainz was more promising, on results I’d probably have thought that over the first season too. The guys in RBR who make the calls haven’t made too many mistakes.
Looking back at the tables of results and experience, I think it is fair to say, the first 7 races is not a reliable predictor of driver talent or long term success.

This is F1, so the only comparison that matters is the comparison to his current teammate’s performance.

Prosit, Agree, The only comparison can only be made with his team mate.
And whether a driver decided upon by a team deserves his seat or not, what does it matter once that decision has been mad by a team. a team’s management will always take those decisions which are believed to be best for the team. those decisions can turn out to be right as well as wrong, but that will not change the way a team is and should be managed.

That was a wasted read as it has no relavance you can’t compare results of back marker teams with midfield teams and say the driver is doing better because he scored points, when the other car is not capable of scoring points

Equally you cannot compare the performance in the first seven races in a mid-field car or a race winning car, as each driver’s experience of driving in F1 will be different. All we have is the data available.
I included the team that each driver drove for in their first seven races, so you can compare drivers who had similarly competitive cars. This could include more than half the drivers listed (those driving for Sauber, Williams, Toro Rosso and Renault in their debut season).

I enjoyed the article. He should be allowed time to bed in and prove himself. He’s been unlucky so far and while he’s not matched his teammate when on a level playing field he is up against a seasoned veteran. Williams have to stand by him. His family have paid an eye watering amount of cash to Williams so there is no chance he’ll be dropped in a hurry. Too early to judge him.

It’s no secret that Stroll’s harsh treatment from some media and many bloggers is due to the way he got to F1 and less about his talent. As the Stroll family continues to say, jealousy is the main component of the criticism. However, as an F1 fan I want to see the best of the best; not some kid who’s dad ponied up millions to get him in. Having said that however, if one could step away and take a pragmatic view without the need to defend because he’s from your country or your generation; or the need to bash… Read more »

Good points WMU, and while Lance is a very conspicuous example of ‘I wanted a cowboy outfit for Christmas, and my Dad bought me Williams’, facts be faced, for most of top level motorsports we’re seeing the kids of the 1% er’s at play.

I know I’m late to the party, but the stats table is wrong. Just look as the Sebastian Vettel line.

Yes, I did misspell his first name, sorry.

No, my bad, I misread. I thought the stats were this season, but you were comparing first seasons. I get it now.

This website uses cookies to improve your experience while you navigate through the website. Out of these, the cookies that are categorized as necessary are stored on your browser as they are essential for the working of basic functionalities of the website. We also use third-party cookies that help us analyze and understand how you use this website. These cookies will be stored in your browser only with your consent. You also have the option to opt-out of these cookies. But opting out of some of these cookies may affect your browsing experience.
Necessary Always Enabled
Necessary cookies are absolutely essential for the website to function properly. This category only includes cookies that ensures basic functionalities and security features of the website. These cookies do not store any personal information.
Non-necessary
Any cookies that may not be particularly necessary for the website to function and is used specifically to collect user personal data via analytics, ads, other embedded contents are termed as non-necessary cookies. It is mandatory to procure user consent prior to running these cookies on your website.
SAVE & ACCEPT
wpDiscuz
18
0
Would love your thoughts, please comment.x
()
x
| Reply
Comment Author Info
Report this comment