Op-Ed – When one tweet blows everything out of proportion

The thought of being “unfollowed” on Twitter by someone you consider to be a friend, colleague or acquaintance, or even someone whom you’ve never met but shared many a conversation with on the social media network, can be upsetting. Go on, admit it, when you see your follower count decreasing, or you notice a certain person is no longer following you, you can’t help but wonder – ‘did I say something wrong!?’. So when Lewis Hamilton took to Twitter last night to vent his frustration at the fact Jenson Button had supposedly unfollowed him, you can hardly blame him – at the end of the day, he’s human just like the rest of us. 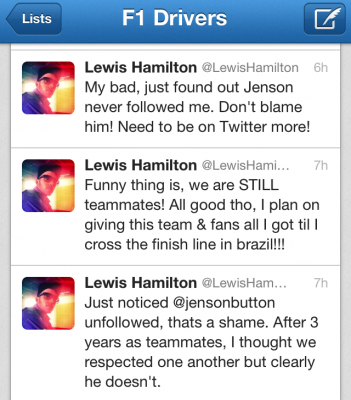 The difference lies in that the world’s eyes are currently on Hamilton as he reaches a critical (and perhaps difficult) point in his career. He’s fighting for the championship, and despite his win in Monza, has recently suffered two DNFs and a disappointing race in Suzuka, and he’s also just announced his decision to leave McLaren for Mercedes, admitting he probably won’t win in 2013. He also has over 1 million followers and the world’s media breathing down his neck ready to pounce should he tweet something none too desired like he did in Belgium.

Lewis would have been best advised to speak to Jenson face-to-face a la the good old days before Twitter existed rather than doing it in the public eye – it would have prevented him from getting into a lot of hot water. The truth is, Jenson never followed Lewis – he confirmed as much in his tweet to Autosport’s Jon Noble last Monday, saying: “Never followed him… Makes a story though!!”. Even before that, Jon Noble had tweeted to say: “Some reckon that Button never actually followed Lewis on twitter in the first place… Either way, still interesting…” – so it was clear from the offset that it was incorrect, but Lewis no doubt didn’t see this.

I knew Jenson had never followed Lewis from the very beginning when Jon Noble first tweeted: “More fall out from driver announcements… Jenson Button has stopped following Lewis Hamilton on Twitter…and added Sergio Perez instead” following Hamilton’s announcement of his move to Mercedes. I remember checking on numerous occasions, and not once did I see Lewis in Jenson’s ‘following’ list (yes, I know I’m sad, but then I spend hours every week bringing you the best from the teams, drivers and F1 media).

Lewis had been without his phone for just over a week when he suddenly reappeared on Friday, and his priority was to focus on his race weekend before trawling through the millions of @mentions that his 1 million plus followers sent him since the news of his move to Mercedes broke. And because he was so out of the loop, having not been on Twitter, and with everything going on, he probably wasn’t aware of the tweets from Jon Noble or indeed Jenson that confirmed the actual truth. Instead, despite Jon not having directly mentioned Lewis in his initial tweet, with plenty of fans and followers including ‘@LewisHamilton’ in their’s, it’s possible Lewis could have eventually gotten wind of it, put two and two together and come up with five – that and the fact it was mentioned in the press. Or, with the updated Twitter for iPhone app making it far easier for you to see if someone is following you or not, Lewis may have just noticed Jenson isn’t following him and mistakenly assumed it’s because he hit the ‘unfollow’ button.

So Lewis has noticed that Jenson isn’t following him. It’s easy for not just Lewis, but anyone to assume that at one stage Jenson could have been following him, after all, they are teammates – and in fact, the fact he didn’t ever follow him is very telling in itself. And like any other human being, Lewis was no doubt upset, so he took to Twitter. Here’s his downfall – he’s in the public eye, and the media would use any excuse to write a headline such as “Hamilton slams Button”, and that’s where he should have stopped, taken some time to think before backtracking to the good old days where mobile phones didn’t even exist, let alone Twitter, and if you had a problem you spoke to the person concerned face-to-face. It’s not like you or I having a rant on Twitter – no one will care, but in Lewis Hamilton’s case the whole world will have something to say about it.

But he didn’t and the media turned an innocent mistake – a non-story – into headline news. So why am I writing about it if I think it’s a non-story I hear you ask? Because in the time I’ve been bringing you F1 Timeline, scouring Twitter for the best from the guys on the inside, I’ve found it fascinating how such simple things can be blown out of all proportions. Social media, at the same time as being an invaluable tool, is also dangerous and can easily taint a person and tarnish their reputation. In the past, I have received tweets from my followers correcting me on something I’ve said, making me feel a tad silly, but I’m not Lewis Hamilton and in his case, it comes with the territory, so it always helps to think before you tweet.

I actually feel sorry for Lewis at the same time that I am disappointed in him. While he could have taken a step back and thought before he tweeted, he also did something that is so natural. He’s a passionate person and he isn’t shy about expressing his emotions, it’s just sad that the simplest things can be blown out of proportion. But then of course, the media are always looking for a story.

What’s really telling though and a question no doubt on a few minds, is why is it that Jenson never followed Lewis in the first place? Is it that he thought he was and never realised he actually wasn’t – or is there more to it? Jon Noble’s tweet may not have been factually correct, but it certainly sparked a story, however blown out of proportion it has become. But we could spend forever trying to figure out why JB never hit the follow button – only he knows why and he’s unlikely to tell us, so I say we let this fire burn out and enjoy the remaining five races of the season.